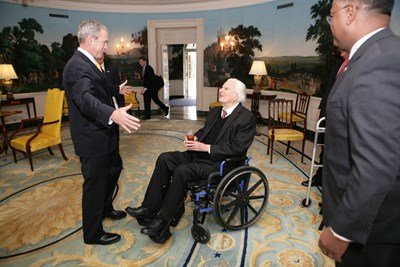 “God’s work within me began in earnest with Billy’s outreach,” Bush wrote in the Journal Feb. 23. “His care and his teachings were the real beginning of my faith walk — and the start of the end of my drinking. I couldn’t have given up alcohol on my own. But in 1986, at 40, I finally found the strength to quit. That strength came from love I had felt from my earliest days and from faith I didn’t fully discover until my later years.”

Graham died Feb. 21 at age 99, following 80 years of ministry that included personal relationships with every U.S. president since Harry Truman.

A Feb. 24 motorcade transported Graham’s body from a training center operated by the Billy Graham Evangelistic Association in Ashville, N.C., to the Billy Graham Library in Charlotte, N.C., where a viewing is occurring Monday and Tuesday. Admirers lined the four-hour motorcade route to pay tribute, according to media reports.

Graham’s body will lie in the U.S. Capitol Wednesday and Thursday followed by a private funeral and burial Friday in Charlotte.

Bush, America’s 43rd president, wrote of the 1985 instance when Graham invited him on a walk around the Bush family estate in Maine and their conversation turned to spiritual matters.

“I mentioned something I’d been thinking about for a while — that reading the Bible might help make me a better person,” Bush wrote. “He told me about one of the Bible’s most fundamental lessons: One should strive to be better, but we’re all sinners who earn God’s love not through our good deeds, but through His grace. It was a profound concept, one I did not fully grasp that day. But Billy had planted a seed. His thoughtful explanation made the soil less hard, the brambles less thick.

“Shortly after we got back to Texas, a package from Billy arrived. It was a copy of the Living Bible,” Bush wrote. “He had inscribed it and included a reference to Philippians 1:6: ‘And I am certain that God, who began the good work within you, will continue his work until it is finally finished on the day when Christ Jesus returns.'”

Bush recounted several additional memories of Graham as well, including the evangelist’s message at the National Cathedral three days after terrorists attacked the U.S. on Sept. 11, 2001, and the occasion Graham mediated a theological dispute between Bush and his mother, then-First Lady Barbara Bush.

“Those of us who were blessed to know Billy Graham benefited from his deep convictions and personal example, his wisdom and humility, his grace and purity of heart,” Bush wrote. “We knew that his life was a gift from the Almighty. And I rejoice that he is now in the company of God, whom he loved so much and served so well.”

Among other U.S. presidents to pay tribute to Graham following his death:

— Donald Trump said in a statement, “Billy’s acceptance of Jesus Christ around his seventeenth birthday not only changed his life — it changed our country and the world. He was one of the towering figures of the last 100 years — an American hero whose life and leadership truly earned him the title ‘God’s Ambassador.'”

— Barack Obama tweeted, “Billy Graham was a humble servant who prayed for so many — and who, with wisdom and grace, gave hope and guidance to generations of Americans.”

— Bill Clinton said in a statement, “Hillary and I are saddened by the passing of our friend Billy Graham, one of the most important religious leaders in American history. His powerful words and the conviction they carried touched countless hearts and minds.

“I will never forget the first time I saw him, 60 years ago in Little Rock, during the school integration struggle. He filled a football stadium with a fully integrated audience, reminding them that we all come before God as equals, both in our imperfection and our absolute claim to amazing grace,” Clinton said.

— George H.W. Bush said in a statement reported by the Houston Chronicle, “Billy Graham was America’s pastor. His faith in Christ and his totally honest evangelical spirit inspired people across the country and around the world. I think Billy touched the hearts of not only Christians, but people of all faiths, because he was such a good man. I was privileged to have him as a personal friend.”

— Jimmy Carter said in a statement reported by the Atlanta Journal-Constitution, “Rosalynn and I are deeply saddened to learn of the death of The Reverend Billy Graham. Tirelessly spreading the message of fellowship and hope, he shaped the spiritual lives of tens of millions of people worldwide.

“Broadminded, forgiving, and humble in his treatment of others, he exemplified the life of Jesus Christ by constantly reaching out for opportunities to serve. He had