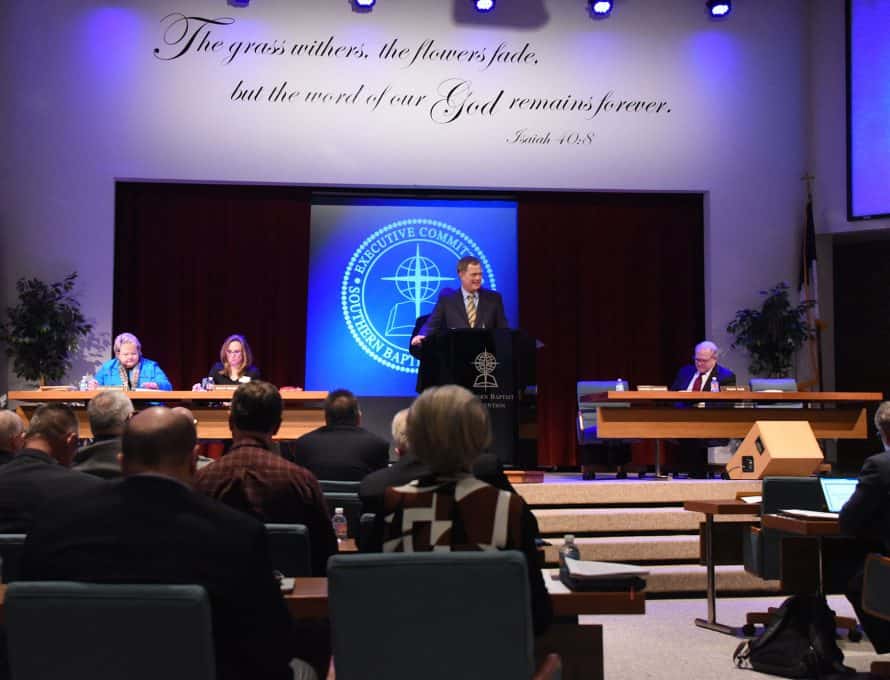 NASHVILLE (BP) – The Southern Baptist Convention Executive Committee has given the District of Columbia Baptist Convention (DCBC) 90 days to “secure” the “the removal of any churches from its fellowship that have demonstrated a faith or practice affirming, approving or endorsing homosexual behavior,” according to a recommendation adopted by the EC Feb. 20.

If such churches remain in friendly cooperation with the DCBC after that period, the DCBC will lose its authorization “to receive and disburse Cooperative Program and other SBC contributions,” the EC stated during its Feb. 19-20 meetings in Nashville.

The SBC’s relationship with the DCBC arose for discussion in light of a Washington church’s Jan. 2017 decision to call a legally-married lesbian couple as co-pastors. Efforts by EC leaders to help the DCBC deal with that church – Calvary Baptist Church – in a biblical manner proved “unfruitful” over the past year, the EC stated.

Calvary voted in 2012 to cease cooperation with the SBC.

Acting on behalf of the SBC, the EC gave the D.C. convention until May 20 to disfellowship Calvary, secure the congregation’s voluntary withdrawal from DCBC fellowship or help lead the church to repentance. If none of those scenarios materializes, the DCBC will lose immediately its authorization to receive and disburse CP funds.

The EC declined, with no dissenting votes, to create a committee to study the feasibility of combining the SBC’s two mission boards, opting instead to encourage the boards’ expressed desire to continue cooperating with one another.

The feasibility of merging the North American Mission Board (NAMB) and the International Mission Board (IMB) has been repeatedly studied, the EC said, and a merger was found to be unfruitful. Instead, both boards were twice restructured after studies ending in 1994 and 2010, resulting in a combined reduction of 700 staff members since the latest restructuring, the EC said.

NAMB and IMB enjoy a productive cooperative relationship, the presidents of both entities told BP.

“I am grateful to report that the working relationship between IMB and NAMB today is strong, and we want that partnership to only increase in the days ahead,” IMB President David Platt said. “At the same time, we believe that significant differences exist between IMB and NAMB in such a way that neither organization believes it is wise to merge together.”

“We are blessed with a great partnership with IMB and we will continue to look for ways that our two entities can work together and minimize redundancy,” Ezell told BP. “With all of the downsizing both NAMB and IMB have had in recent years, we believe continued cooperation, rather than merger, will be much more beneficial to Southern Baptists.”

The EC recognized Jordan as the longest serving executive director in the BGCO’s 112-year history. During his 22-year tenure, the number of Southern Baptist churches in the state increased at least 13 percent, more than 322,000 individuals were baptized and the BGCO forwarded more than $200 million in CP receipts to the SBC, the EC said in its resolution. Jordan’s Southern Baptist service has included pastorates in Oklahoma, Louisiana and Missouri, and several association and state convention leadership posts.

In other action, the EC:

Additionally, the EC was notified that Page will contract with C. Barry McCarty to serve as chief parliamentarian for this year’s annual meeting in Dallas.

The next EC meeting will be held June 11 in Dallas.