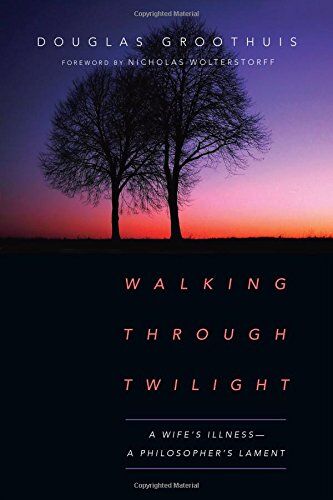 Douglas Groothuis’s wife, Becky, has a rare form of dementia called primary progressive aphasia, which affects the ability to communicate and understand.  She received this diagnosis in 2014, completely changing how the Groothuis’ lived and what their expectations of the future were. Walking Through Twilight is Groothius’s memoir, drawn from the last two-and-a-half years, on what it is like as a Christian to experience the distinctive suffering of dementia care.

The distinctive suffering of dementia care is no doubt a narrow experience, something that most of us have never been through and will never go through.  Some of you might be tempted to dismiss this book for that reason, thinking that such a book wouldn’t have much to say to you.  This would be a mistake.  Groothuis offers broad, biblical reflection on what it means to suffer and love those who are suffering, and those are universal experiences with which we all need help.

Groothuis calls his book Walking Through Twilight because it’s the time in his life before the dark, when he can still communicate with his wife, and not the darkness it will be when that ability vanishes.  He also draws attention to the truth that even in our darkness, light is always coming, just as it did when the dawn of the resurrection overcame the night of the crucifixion.  This book is his witness to waiting for the full restoration of his wife’s mind and body when she is raised up by Christ, the hope of all who trust in God.

Groothius is a philosophy and apologetics professor at Denver Seminary, best known for his work on defending the truthfulness of the Christian faith.  Like his other books, this one is theological and philosophical, full of deep truth explained in a clear, compelling way.  Unlike his other books, however, this one is primarily personal and pastoral.  It is not an academic book.  Rather, Groothuis uses his own experience, both the positive and the negative, as an example of the difference the Christian faith makes in surviving even the worse things life in this broken world can throw at us.

Walking in Twilight is not a linear, chronological account.  Instead, it is more like a series of reflections on what his experience has been like and what it has taught him about life, especially in his relationship with God.  Groothius begins, for example, by talking about what it was like to go through five weeks with his wife in a psychiatric ward, focusing mainly on the rage and the impotence the experience produced in him.  He includes chapters on learning all kinds of new things he never wanted to know, on learning to lie to his wife as little as possible in an attempt to love her, on using gallows humor to cope, and on the temptations to give up or hate God.

While Groothius recounts his experience, this book is full of Scripture, and Groothius reflects on his experience in light of Scripture.  He doesn’t primarily include Scripture to explain what it means to lament or suffer, though there is some of this.  He uses Scripture the way we should all use Scripture when suffering, as a way to hear from God and experience him even in the midst of the twilight.  In this way he models a Christian response to unthinkable horror and tragedy.  Parts of this book are sad, as you would expect.  Ultimately, however, there is grace and hope on every page, because he continues to find God in the twilight, letting us know that even if we’re there or find ourselves there, we can too.