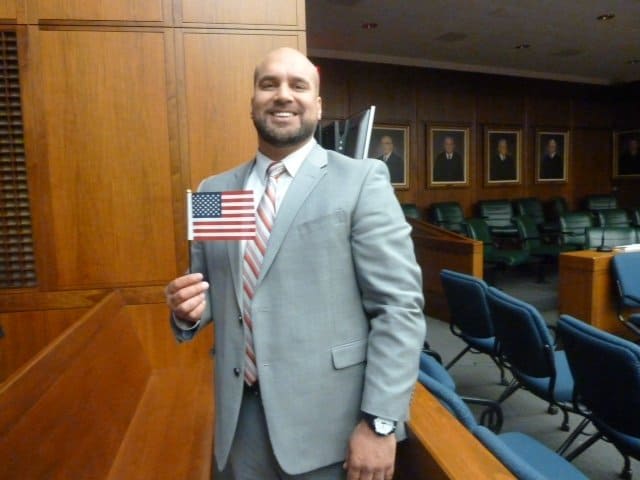 COLUMBIA – Regardless of the politics or legal arguments surrounding immigration, one thing is clear: they need Jesus. One of the United States’ newest citizens knows that first hand.

Omar Segovia, the Missouri Baptist Convention’s ethnic church planting catalyst, was born in Chile, but immigrated with his family to Canada when he was six. He grew up there as a Canadian, but more importantly, he grew up around people who cared about his family and shared the gospel with them. They attended a Spanish-speaking Baptist church there, and while in school, Segovia felt God’s call to ministry. While in the Middle East as an International Mission Board Journeyman he met his wife, Janna. Her family is from Missouri, so they eventually made their way back here where he attended Midwestern Seminary and eventually joined the MBC staff.

Segovia believes God has work for him to do in Missouri and since his visa was soon to expire, it was time to start the citizen process. Because he has lived and worked here for so long and has a family, he said the process was easier than the typical stereotype involved in the citizenship process. He applied last fall, submitted his fingerprints, took his 100-question citizenship test in December, and took his oath Jan. 17.

Now, as the MBC ethnic church planting catalyst, his job is to help make sure that those new to the U.S. get to hear the gospel the same way his family did.

“It’s a ripe time in someone’s life,” Segovia said. “Especially that first year when they’re in the country. Many of them are coming from very difficult circumstances and are very receptive to someone reaching out to them, especially with the gospel. There’s a great chance of them coming to Christ because when you are open spiritually because you’re going through this hard time. That’s why my family accepted Christ; because a co-worker shared Christ with him and invited him to the Baptist church. They became our new spiritual family.”

There are ministries working with recent immigrants and refugees in larger cities – St. Louis Metro Baptist Association’s Good Neighbor Initiative among them – but Segovia said even something as simple as hosting an English as a Second Language class can be a way to show God’s love while helping in a very practical, needed way.

“Most of them come very teachable, and you never know how they can be used for the Kingdom, especially with their extended family,” Segovia said.