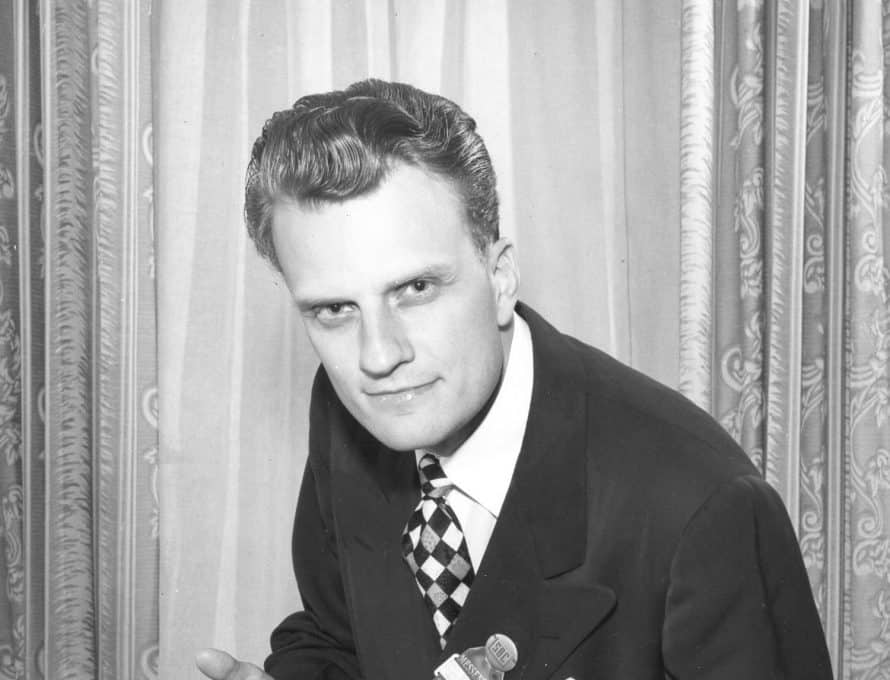 Billy Graham attends the 1951 Southern Baptist Convention Annual Meeting in San Francisco as a messenger. Graham gave an address during the Friday afternoon session of the meeting. SBC file photo.

MONTREAT, N.C. (BP) — Legendary evangelist Billy Graham — whose preaching may have been heard by more people than anyone in Christian history — died today (Feb. 21). He was 99.

During 80 years of ministry, Graham’s down-to-earth, homespun sermons filled stadiums across the world, leading to the salvation of untold millions. Ordained a Southern Baptist minister, he was a longtime member of First Baptist Church in Dallas before joining First Baptist Church in Spartanburg, S.C., in 2008. Graham preached in person to more than 210 million people in 185 countries and in all 50 U.S. states, according to ministry statistics.

Steve Gaines, president of the Southern Baptist Convention, said, “Billy Graham is with Jesus. He has seen and talked with our beloved Savior. May the awareness of his death result in many people hearing the Gospel and being converted to Jesus Christ!”

Gaines, pastor of the Memphis-area Bellevue Baptist Church, said Graham is “the nearest thing to a true prophet that Christians have had in the past century. He was a man of integrity, simplicity, love and evangelistic fervency…. He was a legendary man of God, and every born again Christian will miss him. He was converted to Christ in 1934 at an evangelistic crusade in Charlotte, N.C., led by evangelist Mordecai Ham. He soon felt the call to preach the Gospel of Jesus Christ, and the world has never been the same.”

Frank S. Page, president of the SBC Executive Committee, stated, “Along with countless others, I mourn today for the passing of Billy Graham. As I came to Christ as a young man out of a non-Christian home, he became a mentor to me from afar. I admired his preaching, his life and his integrity. I told him so years ago when I got to meet with him. Heaven is a richer place today.

“For three-quarters of a century, he has been a faithful ambassador for Christ, seeking to reconcile men and women to God through faith in Jesus Christ,” Page said. “He has borne witness for Christ without distinction, sharing the Gospel with the world’s most powerful leaders and with the oppressed, urging the wealthiest and the most impoverished alike to find their hope in Christ alone.”

Graham preached at the SBC’s annual meeting a number of times, beginning in 1951 in San Francisco and most recently in 1999 in Atlanta. He lent his name to Southern Baptist Theological Seminary’s Billy Graham School of Missions and Evangelism. And he received the Ethics & Religious Liberty Commission’s Distinguished Service Award in 1983 and 2007 for his contributions to the Kingdom of God.

In his final years, prayer was Graham’s chief ministry, his son Franklin wrote to friends and supporters, adding, “He looks forward to reports of what God is doing around the world. He always responds by saying, ‘Praise the Lord,’ as he points upward.”

One of Graham’s final video messages, released in 2014, included his expression of longing for heaven.

“I’ve found during the lot of years in my life when I’ve had sicknesses and been in the hospital and so forth, there’s a peace that just resides there and stays there that I cannot explain,” Graham said. “Everybody can have that same peace if they receive Christ as their Savior. I know I’m going to heaven. I’m looking forward to it with great anticipation because of what Jesus did on that cross.”

On Graham’s 95th birthday in 2013, the BGEA released My Hope America with Billy Graham, a video-based evangelism outreach that included what many said would be Graham’s last sermon. The campaign encouraged Christians across the country to invite friends and neighbors into their homes, show a My Hope DVD and share the Gospel message. To date, My Hope America has resulted in at least 200,000 professions of faith.

“Is there another way to heaven, except through Christ?” Graham asked the crowd during a Louisville, Ky., crusade in 2001. “The Bible teaches there’s only one way. Other people will come along and try to tell you there are other ways, but the Bible says there’s only one way, and that way is by the cross. Jesus said, ‘I am the way, the truth and the life. No man cometh to the Father but by Me.'”

Born Nov. 7, 1918, near Charlotte, N.C., during the final days of World War I, Graham was saved at age 16 under the preaching of evangelist Mordecai Ham and soon thereafter felt a calling to vocational ministry. He preached his first revival at age 19 at a small Baptist church in Palatka, Fla. In 1946, at age 27, he began a six-month preaching tour of war-torn Great Britain in the months after World War II, speaking 360 times in 27 cities.

But it was a 1949 Los Angeles tent crusade that put Graham — at age 30 — on the map. Scheduled for three weeks, the crusade, sponsored by Youth for Christ, was extended to eight weeks. Ten thousand people attended nightly, with 16,000 the final night. Magazines such as Life, Newsweek and Time covered the event, and the Associated Press ran a story across the wire that told of a “dynamic, handsome young” evangelist whose “old-style religion” had sparked “the greatest religious revival in the history of Southern California.”

That was just the beginning.

In 1954 Graham returned to London and held a three-month-long crusade in a 12,000-seat arena. Crowds were so large that people couldn’t get in. To alleviate the problem, organizers set up remote crusades at 400 churches and halls throughout the countryside where people could hear Graham’s messages live. On the crusade’s final day, more than 120,000 people filled Wembley Stadium.

Graham played a lead role in the internationalization of missions beginning with the 1974 International Congress on World Evangelization in Lausanne, Switzerland, which spawned an ongoing Lausanne Movement that has nurtured such concepts as unreached people groups and yielded extensive networking among evangelicals globally.

Throughout the 1950s, ’60s, ’70s and ’80s, Graham and his associates prayed that a door for the Gospel would open in the communist countries of Europe known for their hostility toward religion. Gradually, it did.

He preached in 1977 in Hungary to 30,000 people, and the next year in Poland to standing-room-only crowds in various churches. Invitations to East Germany, Czechoslovakia and Romania followed. In 1992, Graham preached at a crusade in Moscow with the Russian Red Army choral group singing “Battle Hymn of the Republic.” On the final night of the crusade, 50,000 packed inside an arena and another 20,000 stood outside watching Graham speak on giant screens.

In his later years of ministry, Graham switched to an abbreviated crusade schedule, preaching at two or three events a year until he was no longer able. His 2005 crusade in New York City drew approximately 90,000 on the final night.

Graham and his evangelism team of Cliff Barrows, George Beverly Shea and Grady Wilson made informal rules to avoid financial and moral scandals. According to Graham’s autobiography, “Just As I Am,” the five men, meeting in a hotel in 1948 in Modesto, Calif., agreed to:

— refuse to “travel, meet, or eat alone with a woman” other than the person’s wife.

— work in cooperation with local churches and not criticize them.

— not exaggerate the size of the crowds at meetings.

“When I arrived at the airport, Mr. Graham himself was waiting for me,” Ali said according to Graham photographer Russ Busby’s 1999 book “Billy Graham: God’s Ambassador.”

“I expected to be chauffeured in a Rolls Royce or at least a Mercedes,” Ali continued, “but we got in his Oldsmobile and he drove it himself. I couldn’t believe he came to the airport driving his own car. When we approached his home I thought he would live on a thousand-acre farm and we drove up to this house made of logs. No mansion with crystal chandeliers and gold carpets, it was the kind of house a man of God would live in. I look up to him.”

Though Graham accepted the custom of segregated seating at his early crusades, in 1952 he took down ropes that had been set up to divide blacks and whites at a crusade in Jackson, Miss. Integrated crusades followed throughout the South, including meetings in Chattanooga, Tenn., and Birmingham, Ala. In 1973, Graham held a crusade in apartheid-dominated South Africa, demanding that the gathering be integrated. He got his way.

“Had it not been for the ministry of my good friend, Dr. Billy Graham,” the late Martin Luther King Jr. said according to Busby, “my work in the civil rights movement would not have been as successful as it has been.”

In 2012, Graham met with New Orleans pastor Fred Luter, who had been elected the first black president of the Southern Baptist Convention.

Graham was preceded in death by his wife Ruth, who died in 2007.

“Someday you will read or hear that Billy Graham is dead,” Graham is widely reported to have said. “Don’t you believe a word of it. I shall be more alive than I am now. I will just have changed my address. I will have gone into the presence of God.”