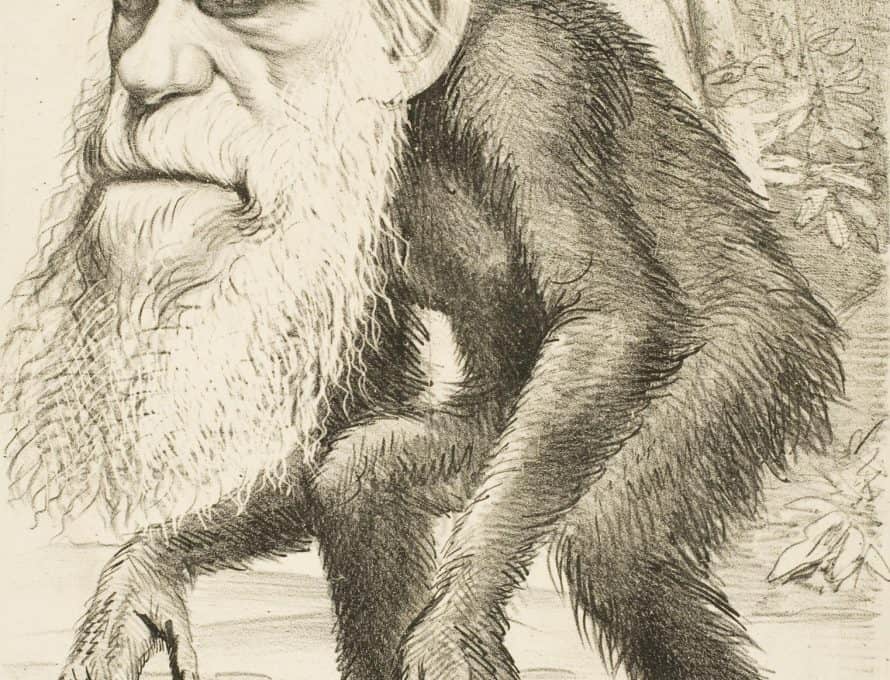 An illustration of Charles Darwin as an ape. Darwin’s contemporary, the Baptist Preacher Charles Spurgeon, opposed the scientist’s ideas and sometimes used sarcasm to get his point across, as when he brought an oversized stuff gorilla onto stage during a lecture.

ASHEVILLE, N.C. (BP) – While the Bible teaches that God designed humans – and only humans – in His image, evolutionary scientists continue to try to explain the origin of humans’ superior intellect when compared to primates. Researchers at Kent State University now think the answer might lie in differences in brain chemicals.

For their study, published in the Proceedings of the National Academy of Sciences, the researchers analyzed brain samples from humans, chimpanzees, gorillas, baboons and monkeys. They found marked differences in brain chemicals in the striatum, a brain region involved in social behaviors.

The researchers said natural selection shaped the human brain’s neurochemical profile, helping us to survive and outcompete with “other apes” and early hominids, numerous humanlike species they say arose after humans split with chimpanzees. But this new research still does not explain why, if the superior intellect and emotional and behavioral complexity of humans made us more fit for survival, natural selection didn’t cause any other species to evolve with the same capabilities.

Elizabeth Mitchell, a physician and a writer for Answers in Genesis, said the biochemical similarities among humans, apes and monkeys show not common descent from a single ancestor – a concept Charles Darwin called the “tree of life” – but common design by a Creator. God used similar genetic building blocks to produce features needed in similar organisms and equipped each with the DNA information to reproduce after its kind, she wrote on the organization’s blog.

“Ancestral biology cannot explain the origin of the information for physical and mental differences, much less the spiritual differences,” Mitchell said. “But the Bible does.”