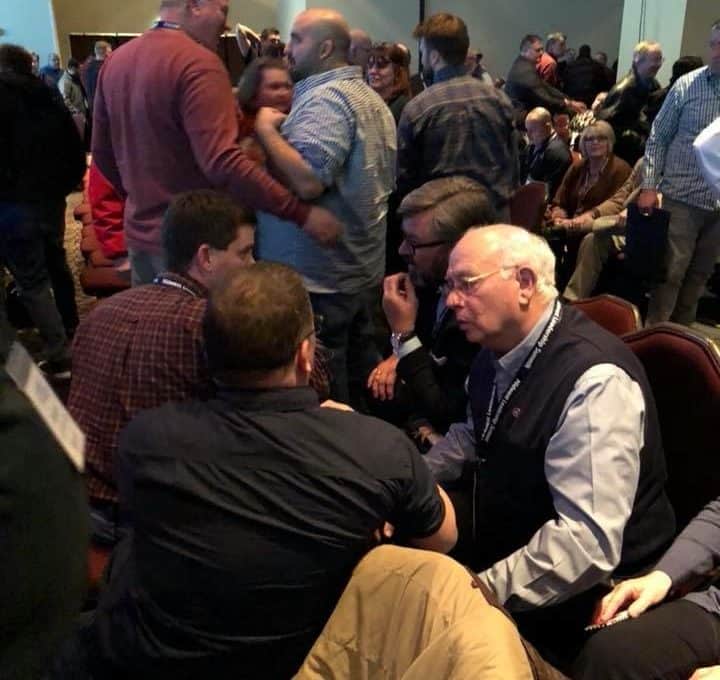 SPRINGFIELD, Ill. – A little over a hundred Missouri Baptists took in leadership training and missions inspiration at the Midwest Advance leadership summit in Springfield, Ill., Jan. 23-25. Registration for the event was coordinated through Baptist associations in the state and directors of missions were allowed to recruit a limited number of pastors and associational leaders for the event.

Headlining the event were Darryl Gaddy, a church planting strategist from Detroit; Kevin Ezell, president of the North American Mission Board; and Jeff Iorg, president of Gateway Seminary of the Southern Baptist Convention.

Breakout sessions on many tracks of church leadership, missions and church growth topics were also provided by regional and national practitioners.

Missourians who were attending the seminars said they were practical and helpful.

Bob Craig, pastor of Providence Baptist Church, near Hannibal, said he “met people from lots of places that we would never meet ordinarily. It was fantastic. They talk a little different. The presenters are experienced in things I would never have the opportunity to be involved in, such as inner city, urban ministry. They were well equipped.”

Craig said he spoke to a man in Ohio who said there is no church in their entire association with more than a hundred members. Craig expressed surprise that some places in the northern part of the U.S. are not nearly as strong as the association he hails from in the Hannibal area.

He was sitting at a break table with fellow pastor Danny Kinzle, of Hunnewell Mission Church, Hunnewell. Kinzle said “It opened our minds up to different avenues we can use. A seminar on ‘How to greet people’ was helpful for me not just to use at church but in life itself. As you meet people where they are at, there are ways to go about that—listening and not judging.”

Their director of missions, Al Groner, Bethel Baptist Association, said he was thankful for Missouri Baptists sending them. “They paid for the lodging, which was great benefit to the association. It gives us new ministry exploration conversations to develop new ministries in the association.”

He added he was impressed with a conference by rural church planter, Andy Addis, from Kansas who shared how to do multi-site church planting in a rural context.

Calvin Brown, DOM in Concord Association in the Jefferson City area, said they brought five pastors and believed it was a good investment of association and state convention funds as well as the time spent in fellowship along the way in the church van.

Gary Mathis, pastoral ministry specialist for the MBC said he was thrilled that the emphasis was presented on leading ministries to change and grow. He said “how to lead change is the biggest challenge most pastors and churches face.”

NAMB President Kevin Ezell led a panel of church planters to discuss their roles in starting new churches across the midwest. Will Bashan was asked, “Why plant?” and he responded “Biblical discipleship necessitates multiplication.” He is planting a church in West Virginia. David Choi, a church planter in Chicago said, “Prayer is the key” in their church planting efforts in that urban, multi-cultural setting. Paul Sabino, a church planter in Cedar Falls, Iowa, said multiplication is a key in their church called Candeo, located near the University of Northern Iowa. He said they recently had a prostitute come to Christ and was baptized and the next week she brought another prostitute to be saved. The crowd cheered as he spoke of these glorious multiplication efforts.

Frank Page, President and CEO of the SBC Executive Committee, spoke on dealing with church conflict in a seminar on the last day. He talked about how to survive conflict with difficult people in established church and new church plant situations.

At the concluding session there was a giveaway of a couple of free iPads by the conference organizers in exchange for completing evaluations of the conference. One of the winners was Walt Pollard of Iberia, Missouri.

Missouri Baptist Convention leaders are part of a coalition of planners from 13 Midwestern states who put this event together. It meets every three years in a central location, usually Illinois. About 1,000 people attended the gathering this year.