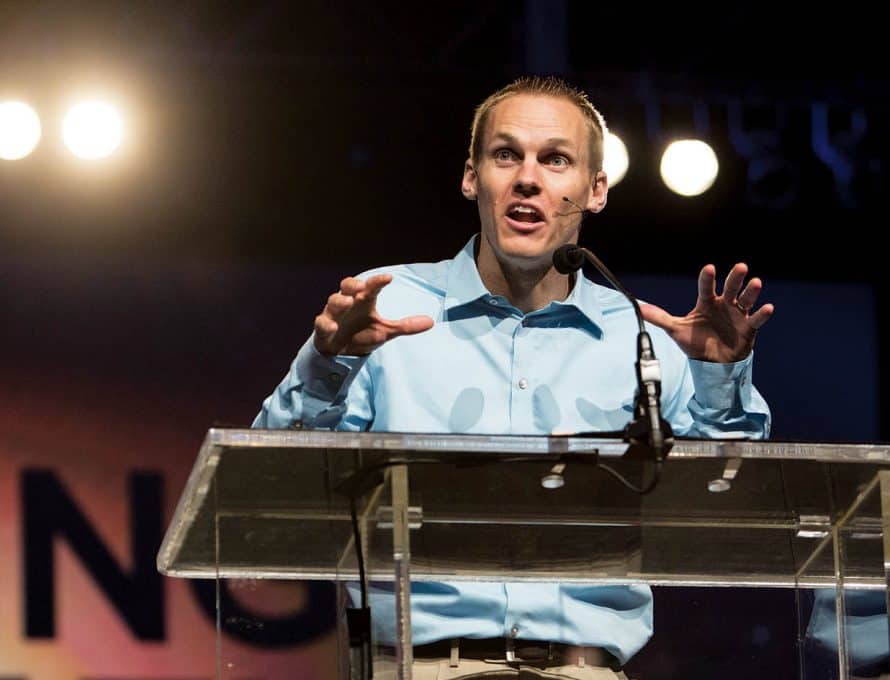 RICHMOND, Virginia – International Mission Board President David Platt has asked the mission agency’s trustees to begin searching for his successor. Platt announced his decision to IMB field personnel and staff on Monday, Feb. 12, in person and via email to those not in Richmond.

While requesting that the search for the IMB’s next president begin immediately, Platt will continue as president at IMB until a new president is elected. A presidential search committee will be comprised of IMB trustees selected by trustee chairman Dr. Rick Dunbar, a member of First Baptist Church Madison, Mississippi.

Platt told trustees, missionaries and staff that during his nearly four-year tenure at the IMB, he has been “burdened to continue preaching and leading in the local church,” which led to assuming a teaching pastor role at McLean Bible Church in Northern Virginia, alongside his leadership of the IMB.

“I am more passionate today than I have ever been about getting the gospel to the nations, and I want to spend what little time I have left on this earth with urgency toward that end,” he said. “This passion is what drove me to become IMB president, and I have sought to honor Him and you in this role over the last four years.”

Platt said his decision to begin the process seeking a successor for his current role is founded in concentrated prayer and fasting alongside counsel from various leaders across the Southern Baptist Convention over recent months.

“I have come to the realization that it is not viable long-term for me to lead as president of the IMB while serving as teaching pastor in a church,” Platt said. “This realization has been sobering, for I don’t believe I can choose between preaching and leading in the local church, and mobilizing and shepherding people in global missions. Therefore, I have come to the conclusion that if I am going to serve in this way in the local church, then I need to serve in different ways for the cause of global missions.”

“I love this IMB family, and I want to encourage you continually with God’s Word, I want to mobilize limitless missionaries to join you, and I want to work with you overseas in any ways I can help you,” Platt said. “In short, I want to do anything I can to see missions succeed across and beyond IMB and the SBC for the glory of God.”

Senior IMB leaders, including Platt, have stated their commitment to the continuity of IMB’s work during the search. Platt said they will continue to implement the initiatives that leaders in Richmond and around the world have put in place aimed toward fulfilling the agency’s mission as the IMB. During Platt’s tenure, IMB has achieved a stable, healthy financial position; clarified its mission; and recalibrated internal systems and structures around that mission.

“We have set the stage for a limitless mission force that is focused on the missionary task with urgent motivation and strong biblical, theological, ecclesiological, and missiological foundations,” Platt said. “We have sought to create collaborative processes in the IMB such that what we do doesn’t revolve around one leader, but around all of us working together. Consequently, our vision for the future remains the same: we will continue partnering with churches to empower limitless missionary teams who are evangelizing, discipling, planting and multiplying healthy churches, and training leaders among unreached peoples and places for the glory of God.”

Specifically, Platt encouraged Southern Baptists’ 3,500-plus missionaries around the world to remain steadfast in their devotion to the missionary task in the place and the role where God has placed each of them, noting they “know better than anyone else: the nations need the gospel.” He implored the missionaries to not let this news distract them from getting the gospel to those who have never heard it.

“I am thankful that David will continue to lead until a new president is elected,” Dunbar said. “He wants to continue IMB’s momentum and progress in reaching this lost world and making us a more effective organization to do that.”

Platt was named IMB president in August 2014, succeeding longtime Oklahoma pastor Tom Elliff, who served as president for three years. Trustees will begin their search for the 13th president of the 173-year-old entity following their next board of trustees meeting.

“We are sad, but also feel confident in the future as we move forward,” Dunbar said. “We trust that David’s gifts of preaching, teaching and writing will continue to bless the work of the IMB for many years to come, and we look forward to a long-term relationship.”

The next IMB board of trustees meeting is Feb. 28-March 1 near Richmond, Va. The meeting will include a Sending Celebration recognizing the appointment of new Southern Baptist missionaries.