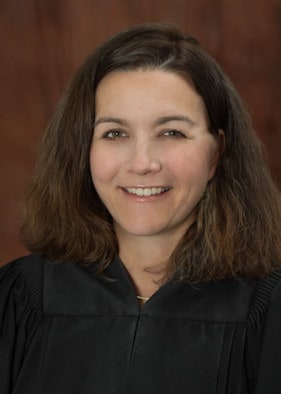 MAYWOOD – Judge Rachel Bringer-Shepherd is not opposed to including faith-based programs in the options for those appearing in her court on felony probation. In fact, she encourages that participation.

“We have a lot of partnerships with churches and faith-based organizations in the court system of probations,” The 10th Circuit Judge said. “We hope these help the people to be successful in their probation sentences. Part of the law days are bringing felony probations (to programs) while the defendants are waiting on a court hearing.”

The majority of those appearing face charges involving intoxicating substances, such as heroin, cocaine, methamphetamine, marijuana, alcohol and synthetic intoxicants.

“All those on felony probation are required to have a substance use assessment and need not only treatment but are required to participate in community sobriety groups of various denominations, including Alcoholics Anonymous, Narcotics Anonymous, Addicts Victorious, Faithwalk, Celebrate Recovery, Victory in Jesus, and men’s and women’s sober-living Bible studies.

One example of such a partnership is Pastor Roger Carter of Calvary Baptist in get Hannibal, who hosts sobriety meetings during law days at the courthouse until those on probation are called before the judge.

“We have courthouses in Hannibal and New London and sometimes in Palmyra. We have several (participating) ministers in our circuit,” Judge Bringer-Shepherd said.

“One local court rule I made in 2011 is an automatic 48-hour jail ‘shock’ detention for those who violate probation with alcohol or drug use. But they can get credit for shock time by going to Alcoholics Anonymous, or weekend retreats, such as Cursillo (Catholic program), Walk to Emmaus (Protestant program), or some other faith-based programs. The faith based programs count towards the ‘shock time’ credit,” she said.

Bringer-Shepherd, a member of South Union Baptist in Maywood, said one reason to include faith-based resources is to “help individuals ready to make a change in their lives or required by probation terms. It is to make them better people, better parents.”

Sometimes the role of the faith-based community is to help sponsor community service programs.

“A church may need help with a food pantry, or help cleaning churches, or helping maintain a church cemetery. Maybe they help at Loaves and Fishes (food program) or the Serenity Club We have good partnerships. We’re very blessed to have so many resources in our area. There are many, many hands reaching out to help.”

She has also had churches encourage their members to serve as foster parents or Court-Appointed Special Advocates, and also to assist children of drug court participants.

Using faith-based programs hasn’t been a formal training agenda item among her peers, but Bringer-Shepherd said it comes up in private discussions.

There are people who leave probation changed.

“I’m grateful for the chance I ‘ve had to watch their growth over the last seven years. They are inspiring to all they touch. Some changes are not as evident, but at least we’re making connections so they can make better choices,” Bringer-Shepherd said.

Last year, John Stroup – founder of Freeway Ministries, a Springfield based ministry to help churches reach the down-and-out – also emphasized how important it is for churches to partner with state and local agencies to bring community transformation.