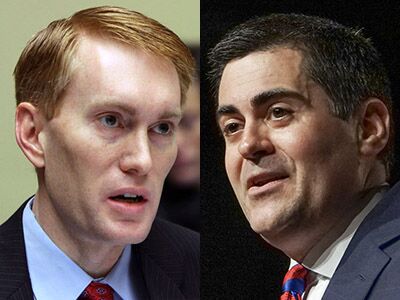 WASHINGTON (BP) – Two Southern Baptists – one a U.S. senator and the other a convention entity head – said on Religious Freedom Day the idea of “separation of church and state” entails freedom – rather than limitations – to Americans in the practice of their faith.

Sen. James Lankford, R-Okla., and Russell Moore, president of the Ethics & Religious Liberty Commission, co-wrote “The Real Meaning of the Separation of Church and State” for the celebration Jan. 16 of the country’s heritage of religious freedom. Time magazine published the article online.

President Trump declared Jan. 16 as Religious Freedom Day, saying in the proclamation that religious free exercise “is a source of personal and national stability, and its preservation is essential to protecting human dignity.”

In their article, Lankford and Moore said people sometimes have used “separation of church and state” to mean religious faith should not be brought into the public square.

Instead, they wrote, “The concept of a ‘separation of church and state’ reinforces the legal right of a free people to freely live their faith, even in public; without fear of government coercion. Free exercise means you may have a faith and you may live it.”

The Virginia law “affirmed what we should recognize in every era: the right to practice any faith, or to have no faith, is a foundational freedom for all Americans,” Lankford and Moore wrote. “This right is also behind what Jefferson meant when he spoke of a ‘wall of separation’ between the church and the state.”

Jefferson used the phrase “wall of separation” in an 1801 letter to Connecticut Baptists who were concerned about their religious freedom, Lankford and Moore point out. In his letter, Jefferson told the Baptists that religious liberty “would be a key part of the American vision,” Lankford and Moore said. In explaining the establishment and free exercise clauses in the letter, Jefferson said the two built a “wall of separation of church and state.”

Lankford and Moore cited recent Supreme Court opinions that have affirmed this understanding of the First Amendment.

The high court’s 2014 decision in Town of Greece v. Galloway, they wrote, held “it is an elemental First Amendment principle that government may not coerce its citizens to support or participate in any religion or its exercise.”

Last year in Trinity Lutheran Church v. Comer, they said, the justices ruled that “denying a generally available benefit solely on account of religious identity imposes a penalty on the free exercise of religion…. The exclusion of Trinity Lutheran from a public benefit for which it is otherwise qualified, solely because it is a church, is odious to our Constitution all the same, and cannot stand.”

Those opinions affirmed “separation of church and state,” Lankford and Moore wrote.

“Separation of church and state doesn’t shut down our debates over religion in the public square; it guarantees the freedom for us to respectfully have those debates.”