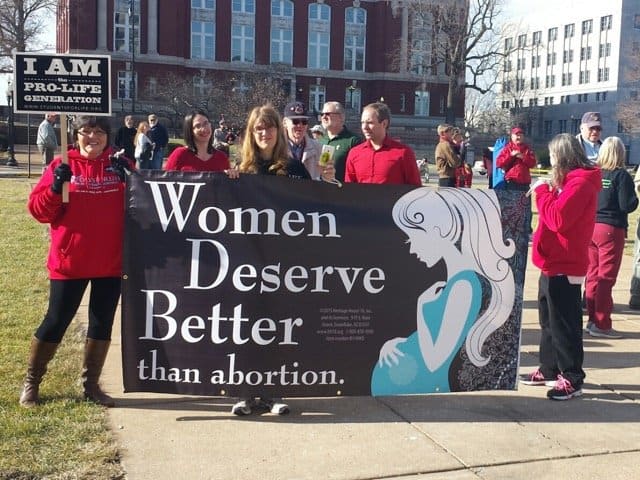 COLUMBIA – Bonnie Lee (left), a Missouri Baptist and pro-life advocate from Columbia, supports the sanctity of human life and the betterment of women during a pro-life rally. Submitted photo.

COLUMBIA – The abdominal bleeding wouldn’t stop and she was running a fever of 104. The landlord knew the ordeal her young tenant had been through at Planned Parenthood, so she called somebody who knew more about post-abortion health concerns than she did. After a few more phone calls and questions, Bonnie Lee was able to get in touch with her.

“Am I dying?” the scared young woman asked Lee.

She told Lee how she called the nurse practitioner at Planned Parenthood and was told she may have the flu so was advised not to come in or else she might expose everyone.

“They don’t want to admit and document complications,” said Lee. “Her condition was life-threatening and when we got her the care she needed they discovered she still had some fetal tissue, which means she had not had a complete abortion and she was experiencing a raging infection. She told me, ‘I know I deserve this because I killed my baby.’ Her pain was much more than physical.”

Lee is a retired registered nurse who serves as the Discipleship Ministry and Religious Liberty and Ethics Specialist at Mid-Missouri Baptist Association, as a Sidewalk Advocate with 40 Days for Life, and as part of the legislative arm for Team P.L.A.Y. (Prayer, Legislation, Activity, and You; a collaboration of organizations and individuals dedicated to limiting abortion in Missouri). She is also a member of the Missouri Baptist Convention Executive Board and of Open Heart Baptist Church here.

The young woman didn’t have family in the area so she asked Lee to accompany her to the OBGYN to make sure all the infection was gone.

“As we waited for her appointment, she pulled out her phone and showed me a picture of the cutest little fairy garden underneath a tree,” Lee said. “She said, ‘That’s where I buried him. I buried my child in the backyard.’ I can’t imagine the pain these women go through for years and years. How are these women going to heal if they don’t feel free to share their stories? The aborted babies have no voice and the exploited women in crisis situations have no voice. That’s the reason why I do what I do. We are to give voice to the voiceless.”

While Lee’s calling to fight on the front lines of Missouri’s pro-life movement began in 2010, she sees how God laid the groundwork for her ministry long before then. Her work as a surgical nurse educated her in sanitary requirements and her work in clinical drug trials gave her experience in patient consent legalities: what is informed consent and what is not. The last four years before retiring Lee worked as a legal nurse consultant, which gave her experience in sifting facts, finding truth and uncovering negligence.

“Twice in my career I’ve actually been terminated for standing on the truth,” she said. “It was not a pleasant time in my life, but those experiences are the only reason why I understand what power can do to people. Through all of that I saw God’s affirmation that He is in control, He will provide and He has a better plan; a plan that I could never have imagined.”

That plan unfolded for Lee one day during an errand for her mother.

“It was providence,” she said. “I went to pick up some dressing needed for my mother’s knee and I see two ladies standing on the sidewalk. I could tell they were praying. My eyes wandered up to the sign on the building behind them and it said, ‘Planned Parenthood.’ I had lived in Columbia since 1984 and I didn’t know we had a Planned Parenthood clinic. I had always been pro-life, but I’ve since learned that 800 babies had been killed in my own city ad I had no idea.”

Armed with a broken heart and a desire to see abortion practices end, Lee joined the 40 Days for Life campaign and came to Planned Parenthood weekly to pray.

“Once God awakened me to the reality of what was happening, I could be silent no more,” she said. “Planned Parenthood is the Goliath who mocks our God.”

They pray for the women going in, they pray for the lives of the babies, and they pray for the staff and that hearts would change and be healed. However, even after Lee joined the effort, she said God had to work out some of the anger in her heart before she could take her pro-life passion beyond prayer.

Lee had experienced a miscarriage at 5 months between the births of her two sons so wrapping her mind around a woman choosing to end a pregnancy was tough for her.

“It took me a year before I considered becoming a Sidewalk Advocate, which is someone who reaches out to the women who come to Planned Parenthood and offers personal prayer, information and alternatives,” Lee said. “I had so much anger in my heart that I didn’t feel compassionate and I knew my words to them wouldn’t be, either.”

But over time God broke her heart for the exploited women in crisis situations, too. And now she knows her fight is not against flesh and blood, but against the rulers, authorities and evil powers that want to continue to treat abortion as a business.

“Even those who are militant to defend their pro-abortion stand are often trying to bury the truth,” Lee said. “The light of that truth comes through and it’s too painful to acknowledge. The guilt and shame preys upon people.”

She said Missouri Baptist churches could and should do a lot to help with that front. They could offer post-abortion healing ministries, support the Missouri Baptist Children’s Home through the Cooperative Program, and do all they can to support their local crisis pregnancy centers. Churches must make a declaration to fight for all human life, put feet to the ground, as well as be the strong voice of hope and forgiveness.

Proverbs 31:8-9 says: “Speak up for those who cannot speak for themselves, for the rights of all who are destitute. Speak up and judge fairly; defend the rights of the poor and needy.”

“And we dare say that’s political? And are silent?” Lee said. “Women sit in the pews unhealed and afraid to speak out. In the past we have only condemned and not shown compassion. That’s got to change. Abortion will not stop until there is a heart change across the board.”