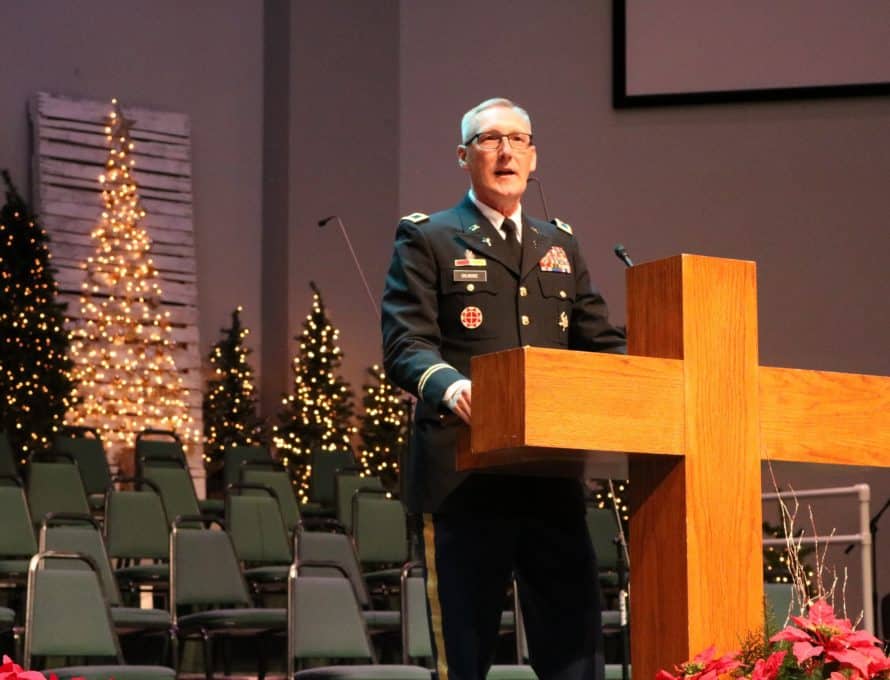 JEFFERSON CITY – In what has become a January tradition in the Capital City, many of the state’s government leaders gathered at Concord Baptist Church here Jan. 3 to be prayed over by Missouri Baptists.

Elected and appointed officials from the three branches of state government, their staffs and families were present at the non-partisan, non-political service as Col. Gary Gilmore, a former Missouri Baptist pastor and the Missouri National Guard Joint Forces Chaplain, challenged the 99th General Assembly to be humble servants in their leadership roles.

Gilmore spoke from 1 Peter 5 before he offered “the best New Year’s gift I can give you, to pray on your behalf for God’s wisdom and blessings.” In that passage, the author implored the elders or leaders to be humble, willing, eager and good examples because “God resists the proud, but gives grace to the humble.”

Regardless of party or position, the elected and appointed leaders are part of a sacred trust and solemn duty to shepherd well, Gilmore said.

“Our flocks are different, but they involve mission and purpose, vision and strategy, execution and celebration,” he said. “It’s about governing, exhorting and stepping into the role of leadership you’ve been called to and given.”

“You may have been elected, appointed, promoted, commissioned, invested, endorsed, or just flat out hired, but you work for the Lord God Almighty, and it’s your job to take care of his people,”Gilmore continued. “The smartest thing you can do as a leader is align your heart with the plan and purpose of God. It’s a wise leader who yields to the Spirit of God as they go about their daily tasks. I’m not asking you to forfeit your role or your responsibilities, but with an accurate understanding of who you are and what your job is, I am asking you to submit to the high calling of service and to yield your heart to the Lord each and every day.”

The event, sponsored by Concord Baptist Church and the Christian Life Commission, is based on the writing of the Apostle Paul to Timothy in 1 Tim. 2:1-3, “First of all, then, I urge that entreaties and prayers, petitions and thanksgivings, be made on behalf of all men, for kings and all who are in authority, so that we may lead a tranquil and quiet life in all godliness and dignity. This is good and acceptable in the sight of God our Savior.”