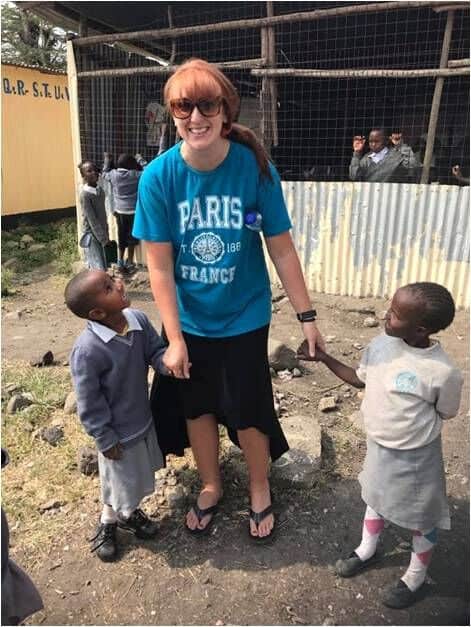 ANDERSON – When Pastor John and Elizabeth Beck moved to southwest Missouri last year to serve at First Baptist Church, Anderson, they brought their three teenage children.  But they also brought a missional desire to evangelize in the East African nation of Kenya.

For several years Elizabeth Beck has partnered with ladies back in her home state of South Carolina to combine a love of sewing with a desire to reach Kenyans for Christ on annual mission trips.

Elizabeth’s friend, Mandy Joye, from Columbia, SC, was sitting by Elizabeth in a Bible study when the question was asked “Would you be willing to do anything He calls you to?”

They felt called to start the ministry called “Hems of Grace” in order to send packages of hand-made clothing to Kenya through Bethsaidai Baptist Church in the capitol city of Nairobi.

Their first trip was in 2014 with Elizabeth and two of their teenaged children touring Kenya and discovering the needs.  Several churches in North and South Carolina and Georgia contributed to the effort and they formed a non-profit corporation.  They have been taking yearly trips with volunteers who bring sewn clothing and healthcare items to the Kenyans.

Rather than ship the clothing, they find they can take multiple suitcases on the planes with them for a cost of $200 per item of luggage.

“The last trip we had 23 suitcases for five people,” said Elizabeth.  “The airport guy was like ‘How many people are going?’” she laughed.

They take a lot of “t-shirt dresses” for children.  A t-shirt with a strip of cloth sewn onto the bottom becomes a dress for a Kenyan girl.  They also convert t-shirts into cloth bags which are in much demand in Kenya since the Kenyan government has banned the use of plastic bags for ecological reasons.

Another item they take is a toy that they call a “Gospel frisbee.”  It is a crocheted disc which can be thrown back and forth in a circular motion but also has the rings of colors representing the gospel story (much like the popular gospel bead bracelets).

They use fabric to make healthcare supplies for the Kenyan ladies, which are re-usable sanitary pads.  Other items they take are recycled prescription eyeglasses and reading glasses. If they can, they take flip flops to give to the children, as many of them do not have shoes.

They have gathered up theology books and Bible study resources for the Kenyan pastors.

On the annual mission trips they travel to Nairobi.  Sometimes they then go out in to the rural villages in the “bush.”  Local pastors accompany the women.

One village they traveled to was Inkisanjani, located at the base of the famous Mount Kilimanjaro.  There they went to schools, orphanages, slums and homes sharing their clothing gifts and sharing the gospel with children who have been abandoned and living on the streets.  Sometimes when the parents are sent to jail their children become homeless.

One of the blessings Elizabeth Beck received on a recent trip was to see a two-year old toddler girl brought to her, and the caretakers at the orphanage told her that she had ministered to the baby two years earlier and they had named the baby Elizabeth, after her.

Mission trip participants with Hems of Grace share the gifts and the gospel message with the children and the families but Kenyan pastors follow up after them and share the gospel in the native languages and provide counseling for the people.  “Often the people are shy and will not make a commitment right then but they will go to the church later and throw themselves on the ground and cry, confessing their sins,” the Becks said.  The pastors kneel down and pray with the people.

“We draw the attention because we are muzungu—white people,” Elizabeth said.

Pastor Beck has gone on one of the trips, doing street evangelism in the villages.  He went with the local pastors to villages with huts and dirt streets.  They would set up a small platform and they would sing and preach.  “I brought along a week of sermons, but I ran out after two days.  Sometimes we would preach and teach several times a day.”  He would teach theology to the pastors during the day and preach evangelism to the villagers in the evenings.

On the trips the meals are often simple fare such as beef or goat stew, rice, beans, cabbage, fried corn bread and sometimes fresh fruit.

The Becks have a strong network of partners in the Carolinas and they continue to network with them, but they are looking for more Missouri Southern Baptists to join them.

“One way they can join us is to help us sew the t-shirt dresses and make the cloth bags,” Elizabeth said.  They also would welcome donations of eyeglasses, books or used t-shirts and cloth to be used for the sewing projects.

And they will be glad to take volunteers with them on their next trip in the summer of 2018.

To arrange to ship a donation or learn more about volunteering with Hems of Grace, contact Elizabeth Beck at 2 Friendship Lane, Anderson, MO 64831.  Phone: 417-845-3565. E-mail lizhemsofgrace@gmail.com. They also have a Facebook page.