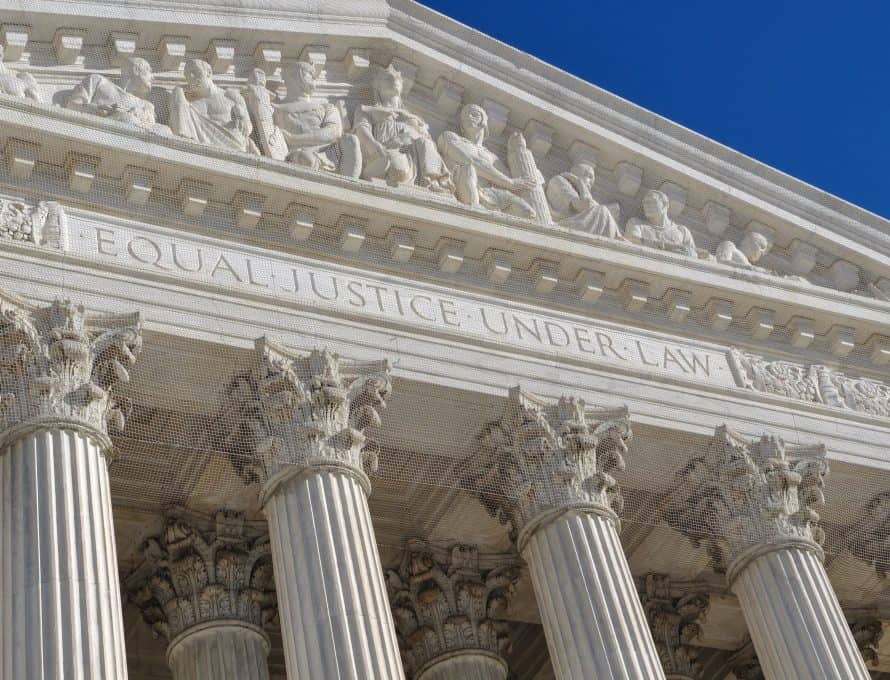 WASHINGTON (BP) – Religious liberty advocates left the U.S. Supreme Court Dec. 5 with some hope that the justices would rule in favor of a Colorado cake artist who refused to design a wedding cake for a same-sex wedding celebration.

The high court heard oral arguments in a major free-speech and free-exercise-of-religion case at the center of the contentious debate between religious liberty and sexual liberty. Multiple cases involving wedding vendors who oppose using their talents in support of gay marriage are being contested in the courts, but it was an appeal by Jack Phillips and his Masterpiece Cakeshop that gained the justices’ consideration first.

The Supreme Court’s decision –  which is expected before its term ends in late June or early July 2018 – could be pivotal in determining how much liberty is possessed by Christians and others in the face of governmental requirements that they believe violate their consciences.

Michael Whitehead, a Southern Baptist lawyer who serves as legal counsel for the Missouri Baptist Convention (MBC) and who was in the courtroom, said there is “reason to hope Kennedy will lean toward free speech and against anti-religious animus by the Colorado Civil Rights Commission.”

“This is a pivotal case in the battle for religious liberty,” said Whitehead, who wrote a friend-of-the-court brief filed by the Southern Baptist Convention’s Ethics & Religious Liberty Commission (ERLC) and others in support of Phillips. The MBC’s Christian Life Commission was among those joining in this brief.

“The questioning was intense to both sides, and the result is too close to call,” Whitehead told BP in written remarks.

Travis Wussow, general counsel and vice president for public policy at the ERLC, said, “The Supreme Court has an opportunity to safeguard the freedom of expression, a vital right to all Americans in every walk of life, and we pray the court takes that opportunity.

“This case is about whether the government can force Jack to use his creative gifts to share a message that violates his sincerely held religious beliefs,” Wussow told Baptist Press in written comments. “A win for Jack would be a win for future Americans seeking to live a life of integrity, open and free in the public square.”

Phillips, who is a Christian, declined to design and decorate a cake for the wedding of two men because of his belief that marriage is between only a male and a female. He told the couple, however, he would make and sell them all other baked items.

After the men filed a complaint with the state, the Colorado Civil Rights Commission ordered Phillips to create custom cakes for same-sex ceremonies or quit designing wedding cakes. He stopped designing wedding cakes. The commission also ordered him to re-educate his employees on complying with the Colorado Anti-discrimination Act (CADA), which includes sexual orientation as a protected class, which the panel found Phillips had violated.

When Phillips appealed, the Colorado Court of Appeals upheld the commission’s order, and the Colorado Supreme Court declined in 2016 to review the decision.

Associate Justice Anthony Kennedy, a frequent swing vote on the court, provided encouragement to lawyers supporting Phillips with some of his questions and comments during the oral arguments.

Kennedy asked Frederick Yarger, Colorado’s solicitor general, if he would disavow the statement of a state civil rights commissioner who said, in the justice’s words, “freedom of religion used to justify discrimination is a despicable piece of rhetoric.”

Yarger disavowed the remark, and Kennedy later said, “Counselor, tolerance is essential in a free society. And tolerance is most meaningful when it’s mutual. It seems to me that the state in its position here has been neither tolerant nor respectful of Mr. Phillips’ religious beliefs.”

Yarger said he didn’t “agree that Colorado hasn’t taken very seriously the rights of those who wish to practice their faith.”

Kennedy took issue with an argument used by David Cole, the ACLU’s national legal director representing the gay couple, who said Phillips’ refusal to design a cake was based on the gay identity of the men.

“[S]uppose [Phillips] says, ‘Look, I have nothing against gay people,'” Kennedy said. “He says, ‘But I just don’t think they should have a marriage because that’s contrary to my beliefs.'”

In response, Cole contended “there’s no question that identity discrimination is involved here because, again, the only thing the baker knew was the identity of the people” involved.

Kennedy disagreed, saying, “It’s not their identity; it’s what they’re doing…. Your identity thing is just too facile.”

During the arguments, U.S. Solicitor General Noel Francisco said in support of Phillips, “[W]hen you force a speaker to both engage in speech and contribute that speech to an expressive event that they disagree with, you fundamentally transform the nature of their message from one that they want to say to one that they don’t want to say.”

More than 40 friend-of-the-court briefs were filed with the court on behalf of each party.

Jonathan Whitehead, also a Missouri Southern Baptist lawyer in suburban Kansas City, and the son of Michael Whitehead, wrote the brief for the members of Congress.