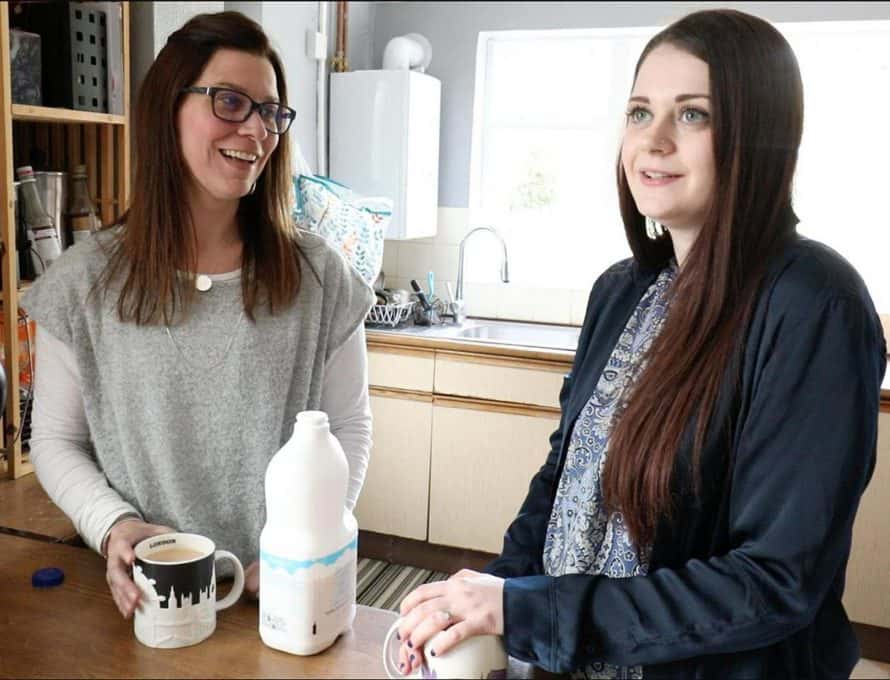 IMB missionary Lindsay Mikeska (left) talks with Claire Scott, a friend whom Lindsay disciples. As Lindsay has mentored Claire, she has become like part of the Mikeska family, who are investing their lives in London so that people like Claire can know Christ and grow in their relationship with him. IMB photo

RICHMOND, Va. (BP) — It was as vivid a dream as it could possibly be, and she didn’t know where it came from.

Dilara* hadn’t been asking anyone questions about Jesus or researching Christianity. But in her dream, Jesus picked the woman up from her bed and started walking her through the streets of her town.

“We eventually came upon this building, and He opened the door for me,” she said. Then she realized it was a church.

“There were three men standing at the front of the church. I could see their faces so clearly,” she said. “Jesus spoke, ‘OK, it’s time for you to believe — what are you waiting for?’ We left the church and He walked me back to my house, and I woke up lying in my bed.”

A few weeks later, Dilara was walking downtown and realized she recognized a few things from her dream that she hadn’t noticed before. She decided to wander down the side streets and see if the building from her dream actually existed. Her heart pounded as she looked for it and nearly jumped from her chest when she found it.

“When she walked in, she immediately recognized one of the three men from her dream standing in the front,” recounted an International Mission Board leader in Central Asia. “Over the course of the next couple of months, she heard the Gospel, began reading the New Testament and surrendered her heart to Jesus.”

Dilara’s story may sound like the exception rather than the norm, but all over the world, God is continually drawing hearts to Himself in incredible ways. From Europe to East Asia, the Middle East to South America, there’s story after story of God miraculously intervening and people coming to faith.

It happened that way for one woman in a Southeast Asian village who said she wanted to “see Jesus” before she believed. The woman suffered a leg injury and was deaf in one ear, and an IMB missionary who had been sharing the story of Christ with her prayed over her and told her she would be back.

“When they came back the following week, the woman met them with the news that her hearing had returned and her leg injury had disappeared,” another IMB missionary in the area said. “More importantly, she was ready to believe, and we are now beginning a new group in that village with the prayer that a new church will form.”

How you can pray

Pray for God to continue to work in mysterious ways in the lives of people in hard-to-reach areas all over the world. Pray God will prompt them to seek out the truth of the Gospel and believe.

Pray for hearts from every people group to be drawn to worship Jesus.

EDITOR’S NOTE: This year’s Week of Prayer for International Missions in the Southern Baptist Convention was Dec. 3-10 with the theme verse taken from 2 Corinthians 5:14 (HCSB) “For Christ’s love compels us, since we have reached this conclusion: If one died for all, then all died.” The verse undergirds the Lottie Moon Christmas Offering for International Missions. The offering, in tandem with Cooperative Program gifts from Southern Baptist churches, supports international workers in seeking to fulfill the Great Commission. Gifts to the Lottie Moon offering are received through local Southern Baptist churches or online at IMB.org/lmco, where there are resources to promote the offering. This year’s goal is $160 million.