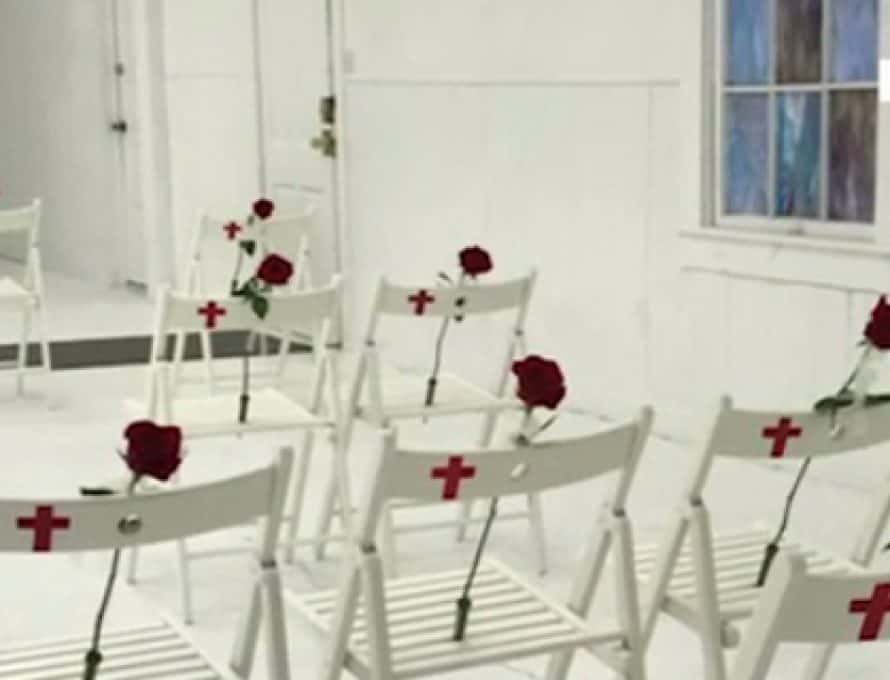 SUTHERLAND SPRINGS, Texas (BP) – Pastor Frank Pomeroy’s first message to the surviving members of First Baptist Church in Sutherland Springs, Texas, was that they must overcome darkness with the light of Christ.

Seven days after a gunman killed 26 worship attendees, Pomeroy – who was out of town during the Nov. 5 attack – delivered his message at a tent worship service blocks away from the church property. More than 500 people attended the Nov. 12 service, according to media estimates. That same day, the church building was opened as a memorial to the slain.

Meanwhile, the North American Mission Board has conveyed to all 26 victims’ families Southern Baptists’ offer to cover funeral expenses. The precise combination of funding sources that will pay for each funeral is being determined by the families amid a plethora of government and private assistance offers, NAMB told Baptist Press. Yet, on behalf of Southern Baptists, NAMB is prepared to cover the full cost for each victim whose loved ones desire the gift.

The Southern Baptists of Texas Convention is helping to coordinate the funeral assistance offer.

Pomeroy, whose 14-year-old daughter was among the slain, said Nov. 12 in a brief address, “We have the power to choose, and, rather than choose darkness, like [the gunman] did that day, I say we choose life,” according to CNN.

Mike Ebert, a NAMB leader who attended the service, said the sentence quoted by CNN reflects Pomeroy’s “big encouragement” in his message: “not to let one moment of evil that took place, one moment of darkness, win the day.”

Pomeroy “was consistently encouraging his church members and anyone else who would listen that they have a choice,” said Ebert, NAMB’s executive director of public relations, “either to allow darkness to overcome or to overcome the darkness with the light of Jesus.”

Pomeroy also spoke of life as a spiritual battle that inevitably includes wounds for anyone contending for Christ, Ebert said. The pastor stated spiritual victory, rather than comfort or safety, is the aim of God’s people.

Mitch Kolenovsky, an SBTC field ministry strategist who also attended the service, said Pomeroy “spoke to that crowd as if they were his congregation on a Sunday morning. He poured out his love for them, shared with them his commitment to the community … He got several ovations during that time.”

At least 12 people have professed faith in Christ as a result of the shooting, Kolenovsky said.

As part of his message, Pomeroy announced First Baptist’s building would be opened as a public memorial for the dead. That evening, the public was allowed into the sanctuary, which had been emptied and painted white from floor to ceiling, according to media reports. A chair with a rose was placed in the room to honor each victim in the place his or her body was found – a pink rose for an unborn baby killed and red roses for the 25 others.

Recordings of some victims’ reading Scripture and praying played on speakers.

“I want everyone that walks in there to know that the people who died lived for their Lord and Savior,” Pomeroy said according to CNN.

First Baptist has yet to make an official decision about what to do with its building going forward, Ebert said, despite media reports to the contrary. He noted Pomeroy had raised the possibility of tearing down the facility at some point in the future, but that was a personal reflection, not a statement of the church body’s decision.