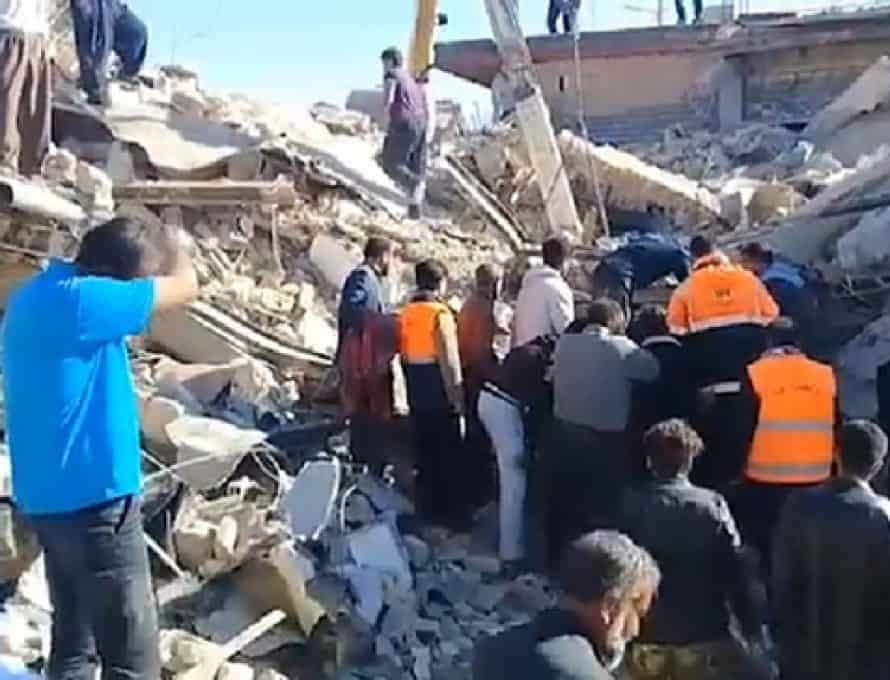 Iranian survivors of Nov. 12 earthquake at the border with Iraq begin digging through the rubble. ISAN-CNN screen capture.

One of the stories in the packet especially caught my interest because of Missouri Baptists’ relief work in Nepal. When the 7.8 magnitude earthquake of April 25, 2015 hit the “top of the world,” it created an incredible crisis with more than 8,700 deaths. Several state convention disaster-relief teams responded to the call for help by Baptist Global Response.

Of course, Missouri Baptists responded with help, hope and healing so that lives and communities are transformed by the power of the gospel. To do the work effectively, we worked with IMB personnel.

The story is circulated in this year’s promotional materials. It is about the Bagby family, which Missourians worked with to share the gospel in the context of so much tragedy. Read their story below:

“Radford Bagby* has long heard mountaineering referred to as a ‘selfish’ sport—it can be risky and expensive, and climbers tend to like to keep to themselves.

“But Radford found the more he got into it, the more God put a passion for other people on his heart. ‘I got my bachelor’s in sports education, and we watched a lot of mountaineering documentaries,’ he said. ‘The people interviewed in the films kept talking about how the mountains represented certain gods to them, and I kept thinking somebody needs to go and share truth with these guys.’

“So, Radford, his wife, Sarah*, and their children have planted their lives in Nepal to take the hope they have to the hard-to-reach people of the mountains.

“Getting to the 28 people groups in their country—each one with its own language and culture and separated from the next group by a massive mountain–takes a journey of weeks. For the closest village, it’s a three- or four-day trip, partly by car and partly by trekking on foot.

“For the farthest one away, best-case scenario is a 14-day journey one way. ‘If everything goes right, and you were to just go to their village, snap a picture, turn around and come right back, you’re still gone from home 28 days. Stay there for any length of time to establish relationships, and we’re talking a long, long trip,’ Radford says.

“It’s a long-term type of work, he said, slow and largely thankless. ‘I do think we will see a lot of progress in our lifetime; it’s just very slow. The fields are hard.’

“But the Bagbys have watched God use two things to open hearts—a major earthquake, and their children. The couple has trekked for days at a time uphill with toddlers, even while Sarah was pregnant. The children got dirty, played with yaks, and met strangers, and people warmed up to them. ‘People see our kids, and they open up about their lives and about the children they lost in the earthquake,’ Sarah said. ‘For them to see us cry with them is a big deal.’

“In one particular village, a rockslide from the earthquake came roaring down the mountain, burying a whole group of people underneath. ‘It’s been more than a year since the earthquake, and people in that village would start crying like it had just happened. It’s still very fresh,’ Radford said. ‘It means the world to them that we came to hear their stories.’

“It’s in those moments that the Bagbys share the hope that they have and pray God softens the rocky soil.”

Missouri Baptists have the opportunity to collectively use this time of year to open our hearts toward reaching the peoples of the world. As Radford Bagby knows from this mountain climbing, we are part of the Southern Baptist family that holds the rope for our international mission personnel. There are many stories that could be told about safety, provision and support for these special people who give their lives to reaching many people who have never heard about Jesus Christ.

We collectively provide for our missionaries by churches giving through the Cooperative Program and the Lottie Moon Christmas Offering. Is it possible for us to out-give what God desires to do through us? I think not. Is this the year we give over the top to reach people like the ones living at the top of the world? I pray so.

Let us have open hearts and open hands. Let’s so cooperate with God that He does something extraordinary through our giving, and it causes the people around us to marvel at His goodness. (*Names changed.)