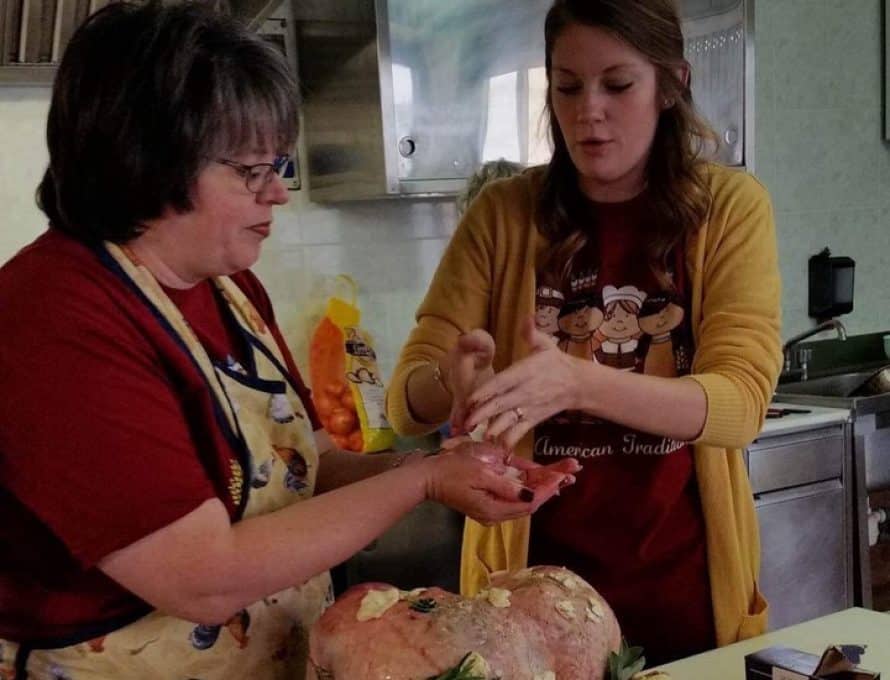 ITALY – A mission team from First Baptist Church, De Soto, took Thanksgiving across the globe, teaching unchurched residentes of northeastern Italy – where the MBC has a missions partnership – how to make a traditional American Thanksgiving dinner. During the event, they were also able to share the reason that they should ultimately give thanks to God – namely, because of His love for them in Jesus Christ. Photo courtesy of FBC De Soto

ITALY – Twelve miles south of Verona, Italy, lies the township of Pizzoletta.  The tourists who visit this beautiful part of Italy rarely make it to this small village and prefer to crowd into the narrow streets of Verona to see the Roman Arena that dates to 40 B.C. or “Juliet’s Balcony” that is just off the Piazza delle Erbe.   But in early November, Pizzoletta boasted an unusual attraction for the Veneto region … an American Thanksgiving dinner.

On November 4th, a mission team from First Baptist Church De Soto partnered with Chiesa Battista di Verona, a church currently meeting in the gymnasium of the Catholic Church in Pizzoletta, to share an “American” meal with unchurched people in the region.

FBC De Soto is a participant in the Missouri Baptist Convention’s partnership in the Veneto region of North Eastern Italy and has made three trips to the area since November 2016.

The germ of the “Thanksgiving in Italy” idea was born in early March 2017 when the mission team’s translator, Natascia, suggested that Italy’s love for food, and the biblical foundations of America’s Thanksgiving holiday, might have great evangelistic outreach potential.  Pastor Andrea’s congregation embraced this idea and began planning the event.

Although the church had just a handful of families at the time, God began to do a great work in the church that led to eight baptisms in their fellowship.  One cannot over emphasize the miraculous nature of eight baptisms in this part of Italy where evangelical believers represent less than one half of one percent of the population!  Pastor Andrea told Pastor Jeremy Muniz of First De Soto that his congregation believed that the prayers of their new American friends seemed to spark this season of growth.

Ten people from FBC De Soto made the trip to Italy with the goal of fixing a Thanksgiving meal for approximately 100 people.  The logistics of such a venture proved more complicated than first anticipated.  For starters, turkey is not a common meat in Italy and Thanksgiving staples such as cranberries or stuffing cannot be found in local grocery stores.  To solve this problem, the team from De Soto took boxes of stuffing, cans of pumpkin pie filling, and all the necessary fixings in their luggage.  American missionaries serving in the Veneto region helped the team procure the turkeys and other perishables.

The team from De Soto working with the local missionaries and volunteers from Chiesa Battista di Verona managed to cook a meal that would have been enjoyed by the pickiest Thanksgiving aficionado in America.  More importantly, the Italians loved the food and enjoyed the evening of fellowship.  Russ Sander, the team leader for FBC De Soto, presented a Gospel message before dessert (pumpkin pie and chocolate chip cookies) and the congregation posted “thanksgiving prayers” on a special wall on one end of the gymnasium where the meal was served.  The scripture theme for the evening was Psalm 50:23 – “The one who offers thanksgiving as his sacrifice glorifies me; to one who orders his way rightly I will show the salvation of God.”  Incredibly, of the 100 people present, over half of those in attendance were unchurched friends of church members, and a few of those unchurched friends attended worship services the next morning!

Pastor Andrea has requested that FBC De Soto and Chiesa Battista di Verona make this a yearly tradition.  The two churches, though 5,000 miles apart, have become one in Spirit.  Lord willing, this partnership will lead to many more baptisms in greater Verona and the growth of God’s Kingdom in Southern Europe. (Jeremy Muniz is pastor, FBC De Soto, and MBC First Vice President.)