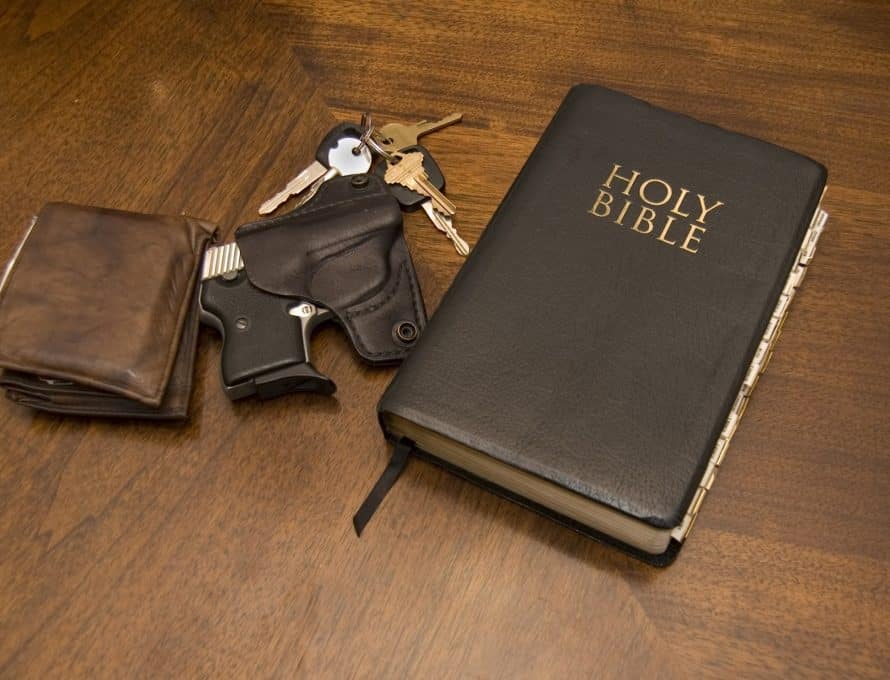 After the recent horrific church shooting in Sutherland Springs, TX I saw a lot of varied reactions on social media. Of course there were renewed calls for stronger gun control laws and there was the predictable defense of Second Amendment rights. Many of social media posts both for and against gun control came from self-identified Christians.

I believe that followers of Jesus should be vocal in this debate, but that is not subject of this post. I want to discuss the exegesis of some of the Christians who were defending taking their guns into churches for the purpose of defending themselves in the face of another armed attacker. When I displayed an amount of discomfort with the thought of many of my parishioners carrying their guns to church in order to protect themselves and others, I was countered with many Bible verses as to why this is not only acceptable but even should be seen as noble. There was one verse in particular that I want to interact with here.

Several people posted Luke 22:36 as a proof text that Jesus sanctioned the ownership of weapons: “…And whoever doesn’t have a sword should sell his robe and buy one.” In spite of the many times that Jesus seems to admonish his followers to foreswear violence and revenge, this verse is cited as the rationale for Christian gun ownership. Is this good exegesis?

Exegesis is the study of ancient texts in their context to understand what the text meant to its original readers or hearers. Our job as students of the Bible is to find underlying principle in a text to apply to our situation today. So, is this verse a good defense for a follower of Jesus bringing a handgun to church for protection?

Let’s first look at the context, what has preceded this statement and what follows. Luke 22 begins with the chief priests and scribes plotting with Judas to betray Jesus. The preparation for the Passover follows, as does the meal itself, Jesus’ Last Supper. There was a dispute over which of the disciples should be considered the greatest. Jesus predicts Peter’s denial and then Jesus tells the disciples to be ready for trouble (including his statement about buying a sword). Following Jesus’ injunction to buy a sword is Jesus’ prayer in the Garden of Gethsemane and his arrest by the chief priests and temple guard.

Should we take Jesus’ words in verse 36 literally or was Jesus speaking metaphorically? What was the point behind this uncharacteristic command? If we take Jesus’ words literally, that he was calling the disciples to be armed and ready for self defense, it seems to contradict his words elsewhere about how to treat those who abuse you (Luke 6:27-29: “Love your enemies, do what is good to those who hate you, bless those who curse you, pray for those who mistreat you. If anyone hits you on the cheek, offer the other also.”) Also, later in chapter 22, when the disciples mention that they have two swords, Jesus simply states, “That is enough.” Many commentators feel Jesus is displaying an exasperation with them because they have missed the point, as in “Enough talk of this!” To be realistic, possessing two swords among the disciples would hardly be enough to defend themselves against the mob that was coming to arrest Jesus. When the mob appears, they asks “Lord, should we strike with the sword?” And one of them (identified in John’s gospel as Peter) puts his sword to use by cutting off the ear of the high priest’s servant. Jesus is not pleased with the act of self-defense and tells the disciples, “No more of this!” In Matthew, Jesus says “Put your sword back in its place because all who take up the sword will perish by the sword” (Matt. 26:52). I think we can conclude that Jesus was not being literal about carrying swords for the purpose of defense against armed assault. So, what did Jesus mean?

Jesus is preparing his disciples for hard days to come. Earlier he had sent the disciples (as well as the 72) out without a moneybag, traveling bag or sandals. They were to receive what was offered to them by the people of peace they encountered on their travels. But now, Jesus is on the verge of arrest and crucifixion. He knows that difficulty will be their experience following his death. He wants them to be aware that these trials are coming so he uses the language of preparation for times of crisis. He is not telling them to be armed and ready for conflict. If that were the case, Jesus would have been disappointed at them only having two swords. It also would have contradicted every other saying he had on violence and revenge. We need to take into account all of Jesus’ teaching on a subject before applying a verse like that without its proper context.

The point I want to make is that when you want to make a case from Scripture about an issue as controversial and volatile as the possession and use of guns in our churches, then you must be painstakingly clear with your interpretation.

We cannot make Jesus appear to affirm something that he did not. And we cannot be careless with our exegesis lest we misrepresent the Word of God and our Savior. There is too much at stake for us to appear to be thoughtless in our handling of the true sword of the Spirit.