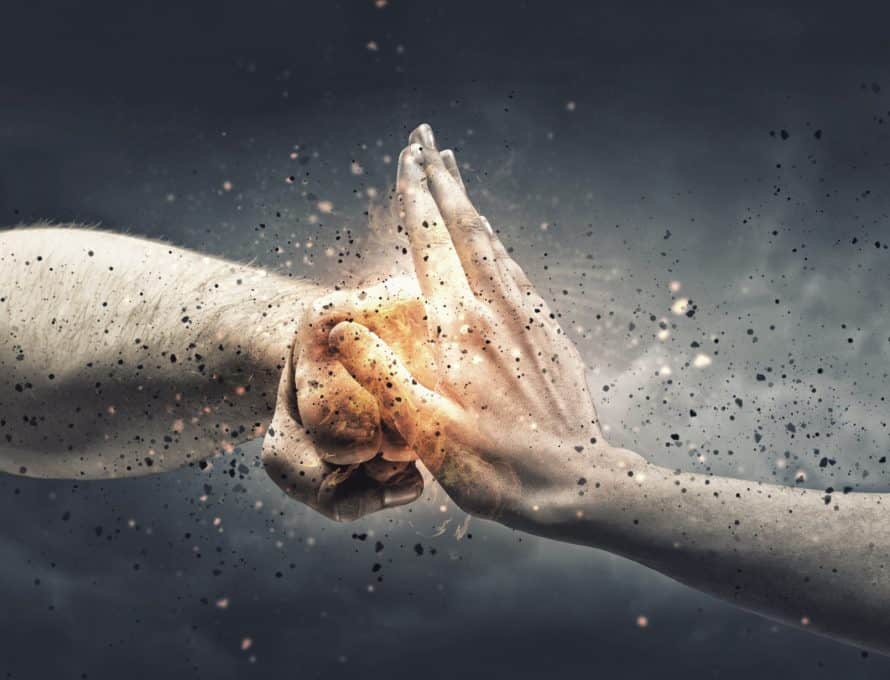 “The God of the Old Testament is arguably the most unpleasant character in all fiction: jealous and proud of it; a petty, unjust, unforgiving control-freak; a vindictive, bloodthirsty ethnic cleanser; a misogynistic, homophobic, racist, infanticidal, genocidal, filicidal, pestilential, megalomaniacal, sadomasochistic, capriciously malevolent bully.”

It seems odd that Dawkins, who has made a career out of pillorying a God he says does not exist, charges this fictional character with a plethora of crimes, including ethnic cleansing.

But the question itself is a valid one. When God instructs the Israelites to annihilate seven nations inhabiting the Promised Land to make room for His chosen people, He uses unambiguous terms.

In passages like Deut. 7:1-2 and 20:16-17, God tells the Israelites: “you must completely destroy them … you must not let any living thing survive.”

And the biblical narrative suggests the commands are taken quite literally: “They [the Israelites] completely destroyed everything in the city [Jericho] with the sword – every man and woman, both young and old, and every ox, sheep and donkey” (Josh. 6:21).

Does Dawkins have a point?

Some defend the biblical narrative by admitting that genocide does, in fact, take place; but they believe the Israelites are mistaken in thinking God commanded it. Others point to these passages as evidence that the God of the Old Testament and the God of the New Testament are completely different beings — or, at least, God softens a bit by the time He sends His Son into the world.

Neither explanation is helpful, or biblically faithful.

A better way to approach the Canaanite passages is by adopting a “literal-typological” approach. That is, the commands should be taken as literal in their immediate historical context, but their full significance is found in the way they prepare the way for Christ, who fulfills the law and the prophets (Matt. 5:17).

That’s the approach of Melvin Tinker in his book, Mass Destruction: Is God Guilty of Genocide? Tinker broaches this thorny subject with humility and the highest regard for the inspiration and sufficiency of Scripture. In the process, he offers keen insights into the conquest of Canaan, including:

God is exceptionally patient. The conquest of Canaan comes only after Yahweh delays (by more than 400 years) giving Abraham’s offspring the Promised Land. Why? Because “the iniquity of the Amorites has not yet reached its full measure” (Gen. 15:16). The Lord waits patiently for the inhabitants of Canaan to stop their heinous practices, including adultery, homosexuality, bestiality, idolatry, and child sacrifice.

God’s longsuffering is evident in the New Testament as well. Jesus directs a number of His parables to the Jewish people, calling them to repent before judgment falls, which it does in A.D. 70. And Peter makes it clear that Christ’s delay in returning is to give us time to repent (2 Peter 3:9).

God’s goal is expulsion, not annihilation. Tinker states: “God’s judgment was primarily that the Canaanites would lose the land because of their detestable religious practices and in order to preserve the purity of Israel’s worship of Him. As we read through Joshua and Judges this appears to be borne out, as the extermination is never fully implemented.”

He further notes that God issues no command to pursue the Canaanites who leave the land. Presumably, only those who stay and fight are to be destroyed.

Context is key. The story of the conquest of Canaan is woven into a rich biblical tapestry in which God creates, humans rebel, and God calls people and nations to repentance and redemption.

If we view this story in isolation, it leads to a skewed understanding of God, His work in human history, and the responsibility of people who exercise free will.

Sin weaves a web. Perhaps the most troubling part of the story involves the death of children. When people and nations plunge into gross sin, and thus fall under God’s wrath, the suffering often is widespread and seemingly indiscriminate.

However, it’s wise to remember that God is the only one capable of this kind of judgment, because He alone possesses all knowledge and wisdom. Would it be more merciful to allow the children to suffer starvation, exposure, or slavery? To grow up in a culture so perverse it would utterly ruin them? Or, can we take some comfort in knowing that children go to be with God after death?

The cross is in view. God’s holiness and mankind’s depravity meet at the crest of Golgotha, where He who knew no sin became sin for us (2 Cor. 5:21). It may seem odd to consider this, but on the cross Jesus is judged guilty of idolatry, adultery, and child sacrifice.

Not that He committed these sins. But through His substitutionary and sacrificial death, He satisfied the wrath of God on behalf of sinners who trust in Him. If God did not spare His Son in order to redeem us, perhaps we should not render Him guilty of genocide for judging the Canaanites, especially after waiting nearly half a millennium for them to repent.