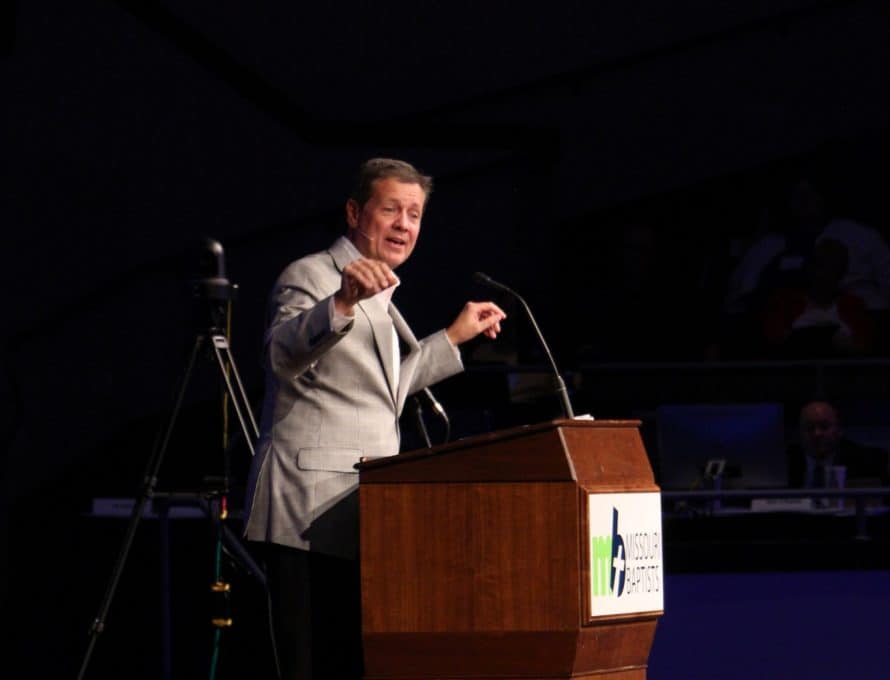 He said his first church was in Ft. Worth, Texas while he was in seminary and he got a unanimous call—all 7 of the members voted for him to be pastor.

“But it doesn’t matter if it is 7 people or 7,000 people, we are to bear fruit, to be good stewards of the time and resources God has given to us,” he said.

He spoke about the FAITH evangelism strategy that was being used in a church where he was pastor in Louisville. A lady named Sherry was interested in signing up for the training but was adamant she would not go out and share the gospel. So they let her take the training. But one day she asked if she could go out on a team to share in a home. She started off telling the residents what the letters F.A.I.T.H. stood for in the gospel acrostic. But she got a little mixed up and said “You need F for forgivness, A for available for all and then she skipped a few and said “T is for turn…you need to turn to God.” And the couple prayed to receive Christ. He said it didn’t matter that she made the acrostic say “FAT” in stead of “FAITH.”

Ezell then said a guy named Bill shared Christ with Ezell’s dad, a telephone installer. He had Ezell’s dad in his home putting in the phone and he shared the gospel with him. “That dad influenced his son, who married a wife, and they have adopted six children through international adoptions from all over the world and those kids are coming to know Christ.”

“Don’t just help people and not share Christ,” Ezell exhorted. “If you are going to help them with a mudded-out home, then share Jesus with them.”

He quoted from Mark 12 where Jesus asked “what is the greatest commandment?” The answer was “love the Lord God with all your souls, strength and mind.”

Ezell said “The Lord said ‘You are not far from the Kingdom of Heaven.”

“Sow seed, leave the harvest in God’s hands,” he preached to the gathered messengers.