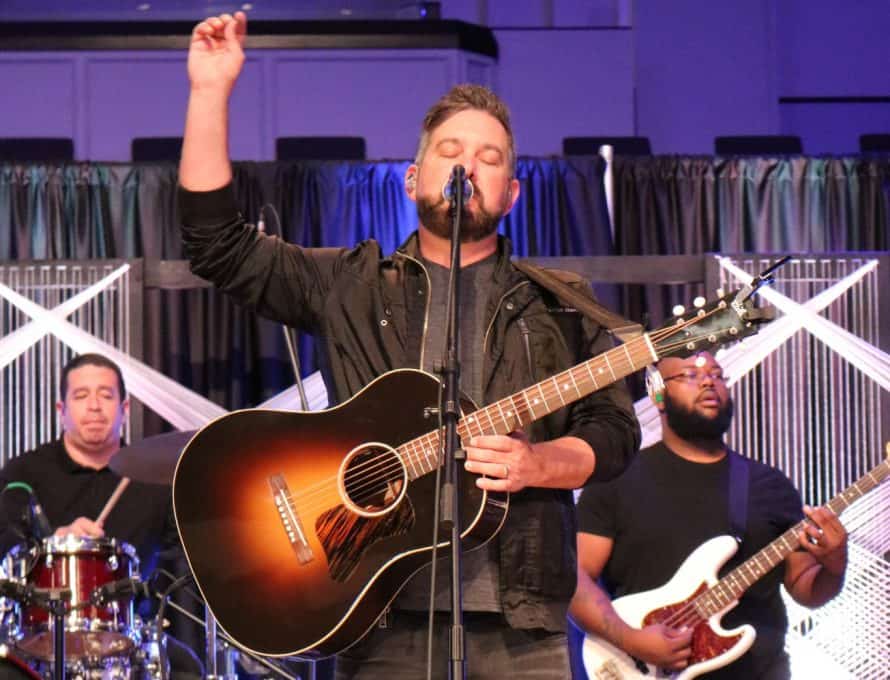 RAYTOWN – A singer at the MBC annual meeting returned to a church he once served when both he and the church had different titles.

Ryan Langford, who left First Baptist, Raytown eight years ago as Student Minister, returned to the same church (now Connection Point) but as Minister of Music, Bands, and Singers at First Baptist, Houston Texas, to share music for the annual meeting.

Langford, who attended both Hannibal LaGrange College (now university) then transferred to Southwest Baptist University, served as a student minister at First, Branson, for five years, then five years as student minister of First, Raytown.

“I thought I’d always do student ministry. I saw myself with a walker (as an older man) leading students. But the Lord took me on a different journey than I ever dreamed,” he said.

In college 20 years ago, Langford and other college students did mission service in Houston. They held Bible schools, and outreach efforts, and in the evening did music for services for the youth. Eventually, Langford was called to First, Houston Texas, and not in student ministry as he expected.

“It’s been a joy to watch the (universal) church to rise up and help. Churches from Missouri, Georgia, Florida, Oklahoma and other places have served and sent supplies. It’s been amazing to watch the Lord use it to minister to the people,” he said. “Some great steps forward have been made, but it will be a long process. Some people may be displaced for two years.”

Langford and his band from the five campuses of First, Houston Texas, that came to Raytown has begun traveling together.

“The Lord has blessed us with amazing musicians and people with good hearts.

“My life is such a portrait of God’s grace. The opportunity to leading worship comes from His grace and His grace alone. That’s why I sing. That is the banner of my heart, my life. Sometimes people see a person on stage and elevate him, but we’re still dependent on Him each and every day the same as the first day we came to Him,” Langford said.

Langford and his wife Amanda have four boys. Langford’s father is a Monett pastor.

“I still love what the Lord is doing in this state (Missouri).”