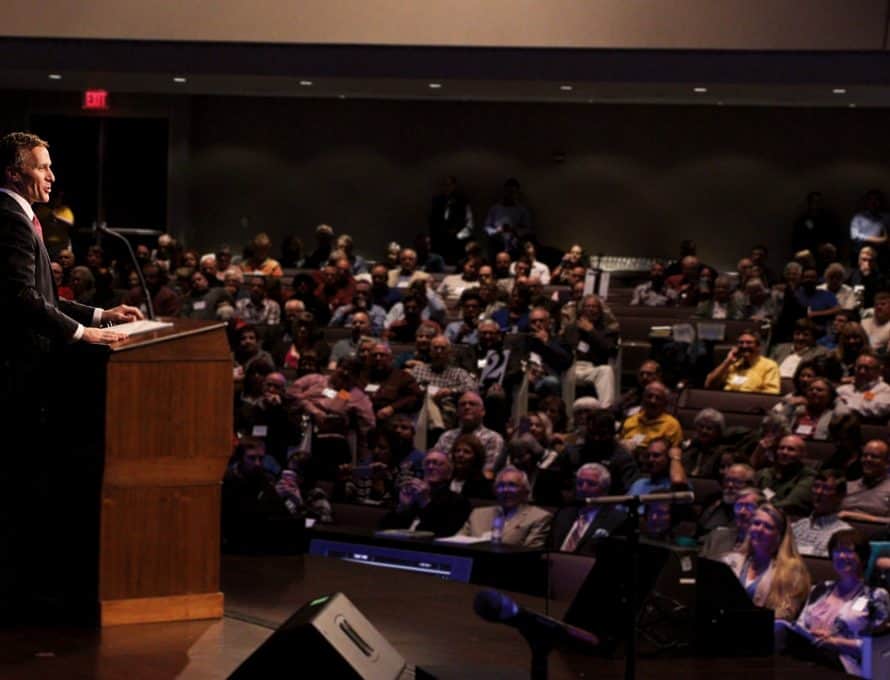 RAYTOWN – For the first time since 2005, the governor of Missouri spoke to messengers at the Missouri Baptist Convention annual meeting which took place at Connection Point Church here Oct. 25.

Eric Greitens, a republican and political newcomer with only 10 months of office under his belt, received a warm welcome with his pro-life, pro-religious liberty message. The governor also thanked messengers for their prayers for him, his family, and the rest of state government. He spent half an hour before and after his address greeting and speaking to convention-goers. Twice during his 24-minute address he was interrupted by loud and extended standing ovations.

“We’re going to go the extra mile to protect a culture of life in the State of Missouri,” he said.

Greitens also highlighted the Trinity Lutheran case that was decided by the United States Supreme Court early this summer. In the days before the court ruling in favor of religious liberty, Greitens preemptively struck language in Missouri regulations that discriminated against churches and faith groups and was the focus of the Supreme Court case. Even as he spoke, two of the attorneys who presented that case, Jonathan and Mike Whitehead, both members of Abundant Life, Lee’s Summit, were standing just off stage.

Greitens encouraged the crowd – and all Missourians – to work together to better the state. He cited the way religious groups have worked to calm racial tensions in St. Louis and respond to natural disaster.

“When we have an ice storm or a tornado, or historic flooding, I see the churches and people of faith right there alongside them,” he said. “I see the Baptists with their chainsaws. When times are hard, you’re the ones that are there. Know that you have a governor who stands behind you and supports you.”

Born and raised in St. Louis, Greitens graduated from Parkway North High School before attending Duke University in Durham, N.C. He later attended the University of Oxford, Oxford, England, as a Rhodes Scholar, earning a doctorate. He later became a U.S. Navy SEAL officer, serving four tours of duty around the world while rising to the rank of lieutenant commander. He commanded an Al-Qaeda targeting cell, earning a Bronze Star and a Purple Heart. Following his military service, Greitens founded The Mission Continues, a non-profit organization that serves veterans, which he led until 2014. TIME magazine included him in its list of the 100 most influential people in the world in 2013.