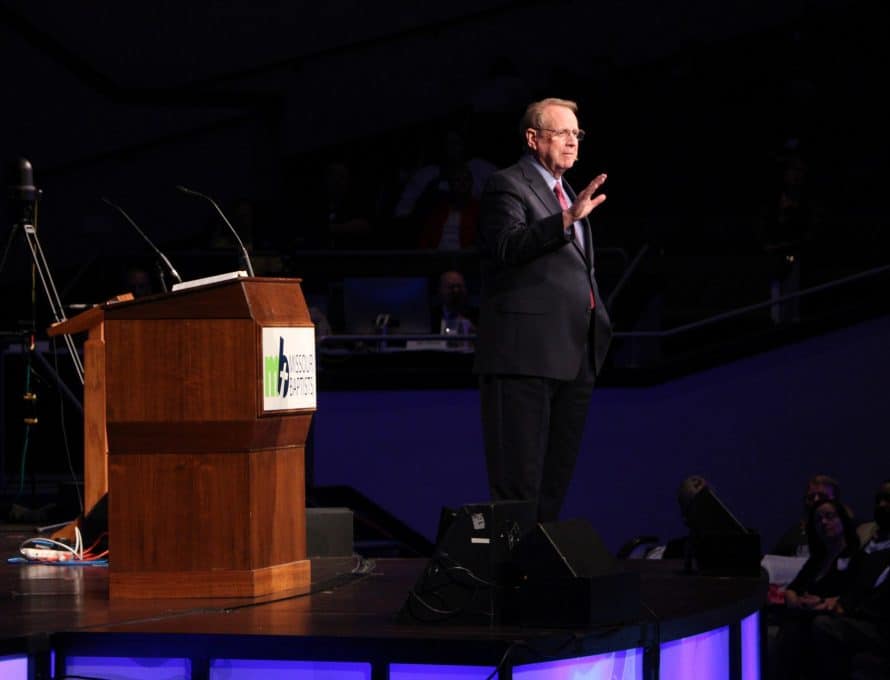 RAYTOWN — The preacher said he was going to start with an altar call. “At the end of my message we are going to call you to come down and pray,” Dr. Tom Elliff said to the MBC messengers at the concluding session of the MBC annual meeting on Tuesday night.

Elliff was president of the International Mission Board of the Southern Baptist Convention from 2011 to 2014, preceding current president Dr. David Platt.

He spoke from his heart, without notes, in front of the pulpit for the duration of the message.

“I am going to ask you to pledge “With the rest of my life, I will run as hard as I can with the gospel.”

Elliff then preached from Hebrews 12:1 Wherefore seeing we also are compassed about with so great a cloud of witnesses, let us lay aside every weight, and the sin which doth so easily beset us, and let us run with patience the race that is set before us,”

He said “Let us run in a cloud that surrounds us.”

He added, “That cloud is a witness of us, to us and with us.”

In recent years he has felt the hand of God on his life as his first wife, Jeanne, passed away. Five months ago he was married to his wife, Diana (Barber) in a ceremony at the president’s home at Southwestern Baptist Theological Seminary in Ft. Worth. He said they were surrounded by all of their children who were witnessing the uniting of their parents in matrimony.

Elliff said he is a Kansas City native and went to school not far from the convention site at a KC high school. He was on the track team and they were to do a race during the halftime of a football game one fall evening. It was raining and then the rain turned to sleet. He said he was feeling mighty discouraged because most of the crowd was huddled under umbrellas and was not watching the runners. Then he saw his mother in the stands. She had traveled on a city bus to be there to see her boy run. So he kicked into high gear and ran for all he could in what he thought was the last lap. He crossed the finish line to hear his coach yelling “One more lap Elliff”

His other encouragements were to run from the choices that seduce us…things that are not necessarily sins, but are attachments to weigh us down” (hobbies, pursuits and the sins that entangle us).

Elliff added the Lord wants us to “run to the Christ who has saved us” He said on his block where he is introducing his wife, Diana to the residents. He is known as the guy who will teach kids how to ride a bike without falling off. He shows the children how to ride the bike without looking at the street below and to fix their eyes on a car way down at the end of the road (just like his daddy taught him to ride).

He concluded “Run with the charge that sustains us.”

At this point, Elliff called everyone who could come down toward the front of the Connection Point Church auditorium and pray for the Lord to give them strength to run the race He has entrusted to them.

He asked the Lord to remind the pastors and laypeople in the dark moments of their ministry to “remember the prayer they had prayed in this place and time.”