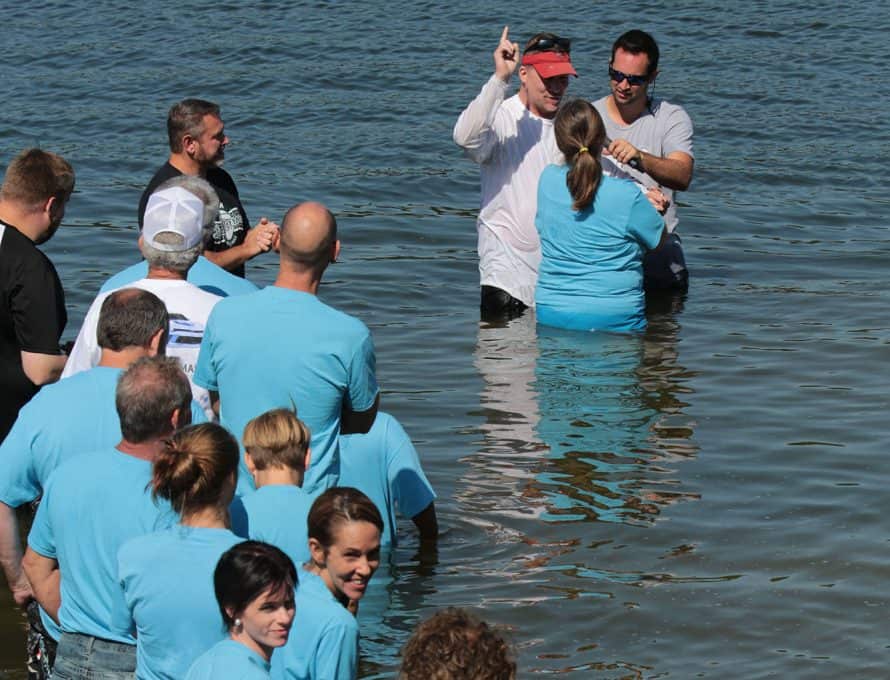 BOWLING GREEN, Ky. – Hillvue Heights Church capped off its summer by baptizing 42 new Christians on Sunday, Sept. 10, at Barren River Lake State Park. Pastor Steve Ayers says his church, the largest Southern Baptist church in the state, has averaged about 500 baptisms per year for the past two decades.

BOWLING GREEN, Ky. (BP) – After surviving a fiery explosion that nearly killed him, Kentucky megachurch pastor Steve Ayers said he’s a changed man, having come out of the ordeal laser-focused on Jesus and telling others about the Gospel before it’s too late.

It was a pleasant June evening when Ayers and his wife Elizabeth decided to go for an outing at Barren River Lake. He climbed aboard their boat and, discovering the battery was dead, flipped the charger. Nothing.

He bent over and jiggled the connection, inadvertently causing a tiny spark. What happened next is believed to have been the result of a leak in the fuel line.

“It flashed and blew up and burned over 60 percent of my body,” Ayers said.

Lying in the trauma unit at Vanderbilt University Medical Center in Nashville, Ayers said he wasn’t scared of dying from the burns that covered his body from head to feet. He was ready to take up permanent residence in heaven with Jesus.

“I feared living,” he said. The pain. The limited mobility. Would God still be able to use him?

Treatment included daily debridement – a harrowing and painful process of removing layers of damaged skin. Then, there were the surgeries, three in the first seven days alone. Doctors used what little healthy skin Ayers had to cover some of his wounds. The rest was protected by synthetic and pig skin grafts.

“It took a lot of prayer to get through that,” his wife said. She couldn’t talk with their adult children, or anyone else, about the severity of Ayers’ condition immediately after the accident “because I knew he may not make it.”

As a registered nurse, Elizabeth Ayers said so many times burn victims come into the hospital alert and talking only to die in the first 72 hours.

“It is a miracle with this much burn mass that he lived,” she said.

Thousands of members at Kentucky’s largest church had devoted themselves to prayer for Ayers. Still, they were surprised when he returned to the pulpit three months after the explosion. Compression garments concealed under his slacks and dress shirt provided the support his tender skin required for him to be able to stand and preach.

“That was the longest time I haven’t preached since I was 18,” Ayers said. “I was still kind of in a fog wondering what God was going to do with all of this. It was a struggle to walk.”

For the first time in 22 years, he had to watch from the shore as his staff ended the summer with an annual mass baptism at Barren River Lake. The risk of infection was too great for him to personally wade into the water. The annual event caps off Hillvue Heights’ baptism totals, which have averaged about 500 per year for the past two decades.

“Steve is an evangelistic leader,” said Todd Gray, head of the Kentucky Baptist Convention’s evangelism team. “He has set the pace for Kentucky Baptists for nearly 30 years, seeing Hillvue Heights grow from 30 people into a megachurch. He continually beats the drum for evangelism and is a cheerleader for the small church pastor who is working hard to reach people.”

“Since his accident his passion for reaching people who are far from God has only increased,” Gray said. “He demonstrates little patience for ‘business as usual’ church life and wants to see a greater effort on winning people to the Lord. While the accident was no doubt extremely painful, God has used it to resharpen his focus and redouble the efforts of Hillvue Heights and the pastors he influences to keep sharing Jesus until He returns.”

The recovery for Ayers has been a deep struggle both physically and emotionally. He said he has come to the point — after 15 months and 10 surgeries with more on the way — where he can praise God for the fire. That through pain, God blesses.

“I was taught since I was little boy that if I was good, God would do good things for me,” Ayers said. “Guess what? I’ve tried to do good things and God roasted my rear end. The accident turned my head upside down, but the good news is that even in the midst of a very painful struggle, God’s presence in His truth began to speak.”

Ayers said his passion for Jesus has quadrupled. Every encounter, every sermon is another opportunity to tell people about the Gospel. He returned to the Barren River shore in September and ushered 42 new believers in baptism. Ayers said the difference this year was his mindset. He didn’t have to celebrate another mass baptism. He was allowed to celebrate in the work God is doing in people’s lives. Every day, regardless of the circumstances, is a blessing.