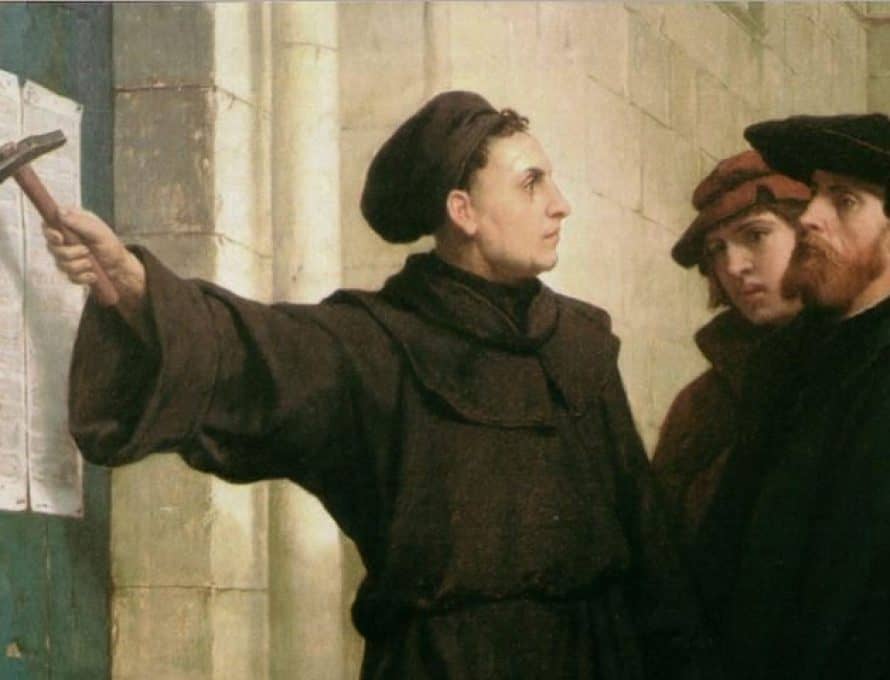 WITTENBERG, Germany – In this painting, Reformer Martin Luther nails his famous 95 Theses to the Castle Church door in on Oct. 31, 1517. This act marked the beginning of the Protestant Reformation.

WITTENBERG, Germany – Five hundred years ago this month, Martin Luther, a German monk and university professor, turned the world upside down as he began to proclaim a gospel of “costly grace.”

On Oct. 31, 1517, Luther posted 95 theses for public debate on the Castle Church door in the small university town of Wittenberg, Germany. In his pungent theses, he criticized abuses of church power – especially the pope’s attempt to raise funds for renovating St. Peter’s Basilica in Rome by guaranteeing pardon for sin to all who would simply donate to the building project.

“As soon as the coin in the coffer rings, the soul from purgatory springs,” said John Tetzel, a famed seller of these papal indulgences. According to Luther, this sale of salvation was, on the one hand, too costly. But, on the other hand, it was far too cheap.

In the first place, Luther worried that the pope’s sale of indulgences would cost the poor people of Germany their livelihoods – and all for a building project that would bring no benefit to them. Careful not to accuse the pope of wrongdoing, Luther wrote that if the pope only knew what was happening in Germany, he would rather burn St. Peter’s Basilica than build it up “with the skin, flesh and bones” of his spiritual flock. If the pope can empty purgatory for filthy lucre, Luther asked, why wouldn’t he do so simply out of Christian charity?

In the second place, Luther decried the indulgence salesmen’s cheapening of God’s grace, which distorted and watered down the message of salvation merely to collect cash. Instead, he insisted that the Christian life should be filled with repentance and that the “true treasure of the church is the most holy gospel of the glory and grace of God.”

“Christians,” he wrote in his final two theses, “should be exhorted to be diligent in following Christ, their head, through penalties, death and hell; and thus be confident of entering into heaving through many tribulations rather than through the false security of peace.”

This gospel of “costly grace” undergirds the whole of Luther’s theology.

In 1937, the German Lutheran Dietrich Bonhoeffer – who would later be hanged by the Nazis because of his involvement in an attempt to assassinate Hitler – described Luther’s doctrine of “costly grace” – contrasted with “cheap grace” – in an unforgettable manner. He writes:

“Cheap grace means grace sold on the market like cheapjacks’ wares. The sacraments, the forgiveness of sin, and the consolations of religion are thrown away at cut prices. Grace is represented as the Church’s inexhaustible treasury, from which she showers blessings with generous hands, without asking questions or fixing limits. Grace without price; grace without cost! The essence of grace, we suppose, is that the account has been paid in advance; and, because it has been paid, everything can be had for nothing. Since the cost was infinite, the possibilities of using and spending it are infinite. What would grace be if it were not cheap?…

“Costly grace is the treasure hidden in the field; for the sake of it a man will go and sell all that he has. It is the pearl of great price to buy which the merchant will sell all his goods. It is the kingly rule of Christ, for whose sake a man will pluck out the eye which causes him to stumble; it is the call of Jesus Christ at which the disciple leaves his nets and follows him.

“Costly grace is the gospel which must be sought again and again, the gift which must be asked for, the door at which a man must knock.

Marking the 500th anniversary of the Protestant Reformation, this issue of The Pathway celebrates Luther’s proclamation of this priceless, yet costly, grace.