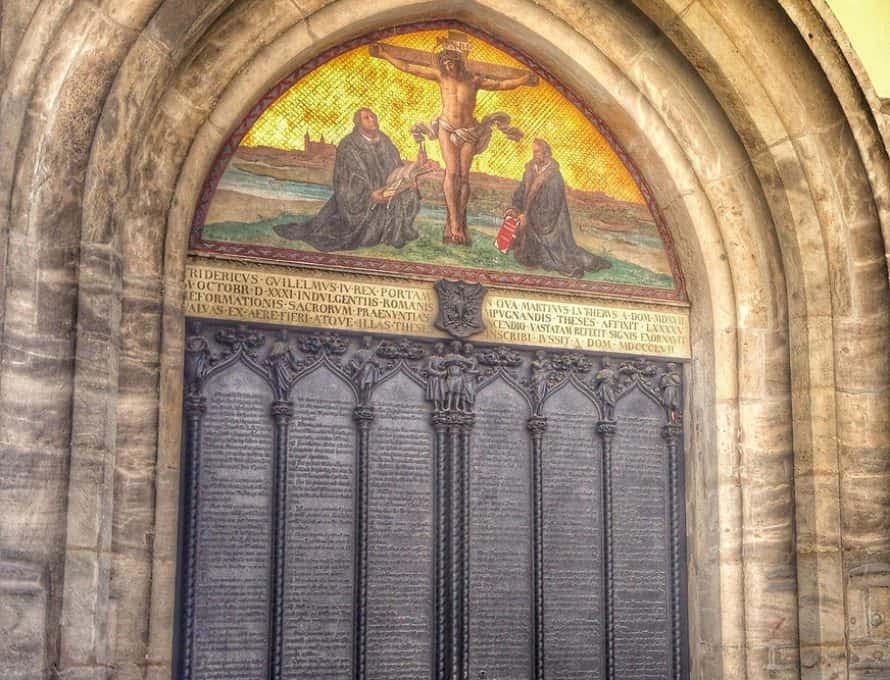 WITTENBERG, Germany – Luther ignited the Protestant Reformation 500 years ago when he posted his 95 Theses to the Castle Church Door in Wittenberg. Since then, the original wooden door has been replaced by a metal door inscribed with Luther’s revolutionary theses. Today, historians and theologians debate the question, “Is the Reformation over?”

JEFFERSON CITY – Having been warned that all Baptist campus ministries were not equally committed to the authority of Scripture and the necessity of evangelism, I joined Campus Crusade for Christ (now Cru) as a first year student at the University of Virginia. In Cru, I met students from a wide variety of denominational backgrounds:

Presbyterians, Pentecostals, Episcopalians and, yes, Roman Catholics. Having grown up in a strongly Catholic area, I knew that doctrinal dissonance existed between Cru-style evangelicalism and official Roman Catholic doctrine. And yet we sang together, prayed together, and shared the gospel together using Cru’s hallmark evangelism tool, The Four Spiritual Laws. Had Catholics and evangelical Protestants patched up their centuries-old doctrinal differences?

Was the Reformation over?

Martin Luther’s Ninety-Five Theses sparked the Reformation in the 16th century, a period of radical transformation that changed the course of Church history. Marked on one side by the Theses (1517) and on the other by the Peace of Westphalia (1648), Protestants and Catholics disputed doctrine in books and fought to enforce it on the battlefield. Zwingli, who led reform in Zürich, died wielding a two-headed battle axe against Catholic armies in 1531. Nearly one hundred years later, more than 8 million German Protestants died in the Thirty Years War (1618-1648). Thankfully, this aspect of the Reformation is over. In the West, at least, doctrinal disputes are no longer settled by violence.

The Peace of Westphalia ended the last war of religion. Subsequently, arguments for religious liberty and the new reality of religious diversity combined to gradually erode religious persecution. Eventually, a robust commitment to religious freedom emerged in the West. On the whole, individuals living in the West today are free to choose their own religion—or none at all. As many have pointed out, this freedom is the logical conclusion of the Reformers’ commitment to freedom of conscience. In this matter as well, the Reformation is over. Today in America, it is the state that threatens this freedom, not the Catholic Church. Indeed, Roman Catholics and Evangelical Protestants stand united against this threat. Such cooperation increased significantly in the latter half of the twentieth century.

Several developments led to this warming in relations between Protestants and Catholics, especially in America. First, among the outcomes of Vatican II (1962-65) was the Catholic Church’s decision to label Protestants “separated brethren,” not heretics. Second, the Catholic Charismatic Renewal movement, birthed at Duquesne University in the late 1960s, brought Charismatic practices into the Catholic Church. Along with them came a greater connection to evangelicalism. Third, an “ecumenism of the trenches” developed between Catholics and evangelicals who found themselves working side by side in the pro-life movement. Along the way, they also realized they had much in common theologically, and a group produced the controversial Evangelicals and Catholics Together, articulating those areas of agreement.

The participation of my new Catholic friends in Cru reflected these developments. Their very presence signaled that, in many (positive) ways, the Reformation was over. And yet, this should not overshadow the fact that many of the theological issues that divided Protestants and Catholics in the 16th century remain. The Catechism of the Catholic Church reveals that official Roman Catholic theology continues to view Scripture and tradition as equal authorities, affirms the intercessory work of the human priesthood, and portrays participation in the sacraments as necessary for salvation. These areas of ongoing disagreement are significant and cannot be flattened. And so, if we consider that the goal of the reformers was to bring the whole of Christianity into theological alignment on such issues as sola Scriptura and sola fide, the Reformation is not over. Thankfully though, it most often continues as conversations among friends, not battles between soldiers.