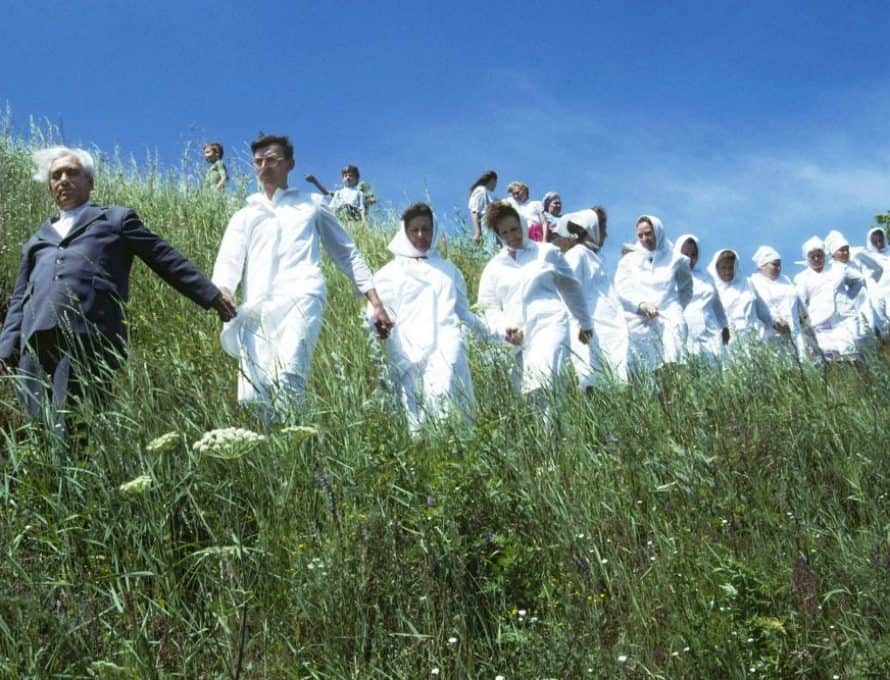 In Soviet-era Siberia, 30 new Christians resolutely walk down a hill to be baptized in a river. â€œI have decided to follow Jesus, no turning backâ€ were more than words for them.

NASHVILLE (BP) – The late award winning photographer Don Rutledge tried his hand at pastoring, but realized his true calling in uniquely displaying God’s creation and the global missions impact of the Cooperative Program. Photographs and related items spanning more than 40 years of his ministry and missions comprise a new Southern Baptist archival collection.

“I love photojournalism and enjoy using it as a worldwide Christian ministry,” the renowned photographer has said. “It forces me to see, to look beyond what the average person observes, to search where few people care even to look, to glance over and beyond my backyard fence.

“It helps me translate the national and international ministries into human terms by telling the story through people rather than through statistics,” he said during his ministry.

Housed at the Southern Baptist Historical Library and Archives (SBHLA) in Nashville, the Don Rutledge Photograph Collection includes hundreds of original prints and corresponding oversized images; about 1,000 each of slides, negatives, and contact sheets; boxes of correspondence, several files of handwritten project notebooks, and other materials related to Rutledge’s career, according to SBHLA Director Taffey Hall.

Rutledge’s family donated the materials in 2016, and also included his cameras and other personal items on loan, Hall said.

His widow “Lucy Rutledge expressed she would be glad for Don’s material to bring an awareness to missions,” Hall told Baptist Press. “This is a remarkable collection and will be a gem for researchers interested in photographs of the Southern Baptist Convention’s varied missions activities in the second half of the 20th Century.”

Ron Tonks, retired assistant director of the former Southern Baptist Convention Historical Commission, applauds the Rutledge collection. He remembers Rutledge as a very courteous, polite, and effective missionary with entities now known as the North American Mission Board and the International Mission Board.

Rutledge left a legacy of photojournalism that told the story of Southern Baptist missions in the U.S. and abroad, captured insightful and educational images of everyday life, and is remembered as a mentor and teacher to friends and colleagues who have expanded his ministerial footprint.

One of many photographers who give homage to Rutledge is longtime friend and Southern Baptist photographer Jim Veneman, who alerted the SBHLA to the Rutledge materials and helped arrange the donation.

The archived collection will allow Rutledge’s gifts especially as a mentor to continue posthumously, said Veneman, who carries Rutledge’s teachings into the classroom as a professor of journalism and new media at California Baptist University in Riverside, Calif.

“My students benefit each day from my relationship with Don,” Veneman told BP. “Of course, I tell stories about him, but more than that, a great portion of the important ideas I teach have grown out of the influence Don has had on my life.

“Each year students leave CBU with an ability to see beyond the surface and with the desire to make others more aware because of the impact of Don’s life and work,” Veneman said. “They leave here more prepared to introduce their world to Jesus Christ.”

Rutledge received more than 300 awards and inspired hundreds of photographers and writers, mentoring many personally. He also ministered by developing relationships with those featured in his work, Hall pointed out.

Parts of the Rutledge collection are currently on display on the second floor of the SBC Building in Nashville. Hall also showcased Rutledge and his work Oct. 10 in a presentation to SBC staff.

“Together Don and Lucy Rutledge created an amazing image of marriage with Christ as its foundation,” Veneman told BP. “As powerful as Don’s work has been, so too has been the strong example shown through their relationship. I am so thankful to have had both Don and Lucy in my life.”