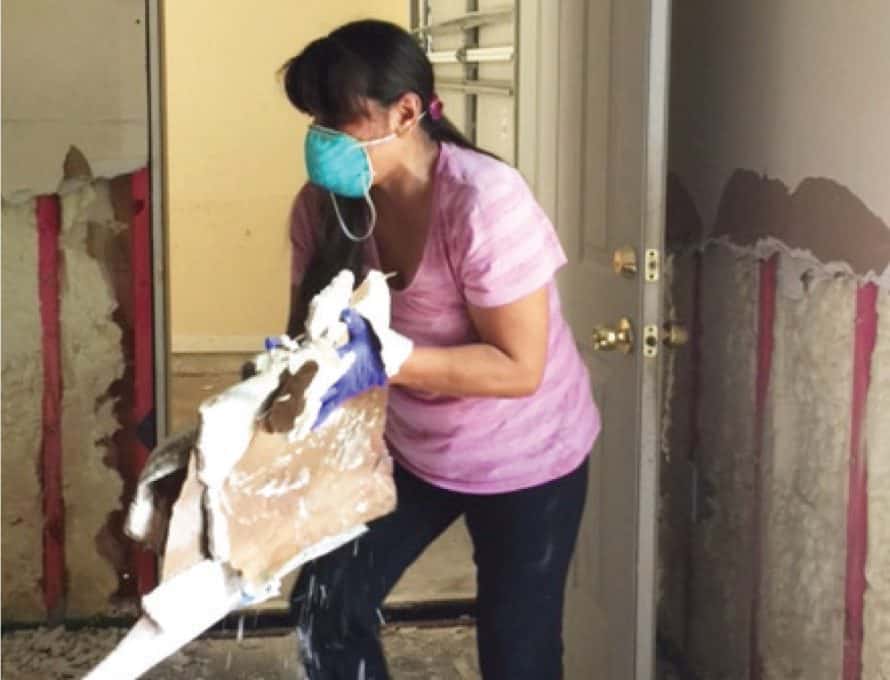 TEXAS CITY, Texas – Days spent responding to Hurricane Harvey were long, humid and exhausting. But ask any one of the hundreds who answered the call to bring help hope and healing, and they would most likely say the sacrifice was worth being a blessing to someone else in need. Often times, in fact, they are the ones who come away blessed.

Such is the case of those volunteers who were fortunate to meet Maria Renovato and hear her testimony one evening.

“Before the Hurricane,” she told the DR workers, “I found myself like most of you probably have done some time in your past: kneeling, praying and pleading to God in desperation with all my problems, mainly my financial problems. I was desperate, and I told God, ‘I don’t know what to do any more. I put myself in this hole where there is no way out and all I see is dead ends.  I need a miracle; I need your help. I don’t know how You’re going to do it, but please Jesus, please help me find a way out.’

Later, she had a dream.

“I dreamed that I was standing in water, the water was up to my waister and I looked to my left and there was a door of a house opened, and it was my house and the water was flowing in through my home. I looked, and everywhere around me was water, but all the water was sky blue and it was beautiful. I felt no fear.”

Renovato didn’t know the dream’s meaning, or if it even had one. Then came Friday, Aug. 25th.

“They let us off work early because of the storm. People said, ‘fill up your car with gas, stock up on food.’ My gas tank was on red as I was driving home and I only had $1 in my bank account.”

In the end, she called on brothers and sisters to come get her, and gambled that the check she wrote for groceries wouldn’t clear until her paycheck was processed. The shelves were mostly empty, but she was able to buy some bottled water.

The next night, Renovato decided to sleep in the living room to be near her children.

“Before I laid on the couch,” she said, “I looked out the window and the street was flooded. I went to the couch and laid down, but I didn’t sleep; I kept getting up and looking out the window and every time I looked, the water was up higher and closer to the house.”

She didn’t sleep that night, and was awake when the water began to seep into the house. She woke up the kids, and they began stacking things up higher to avoid them getting wet. She didn’t panic, and neither did the kids. Eventually, they shut off the circuit breaker to avoid electrocution and were down to flash lights, candles, and cellphones with dying batteries.

“I kept thinking, ‘This is probably it,’” she said. “’The water can’t get any higher than this.’”

But it kept rising. Relatives begged her to let them come get her, but by that time, the water was too deep for them to drive. At 1 a.m., she called 911 and asked to be rescued.

But it kept rising. They waited for rescue on top of the highest bed in the house, watching the water creep higher. Renavato’s sister texted her, asking her to call 911 for her as well. She called a third time, this time for herself, but rescuers were significantly backed up.

“I understood and didn’t judge them,” she said. “I appreciated them doing what they were doing, working hard to rescue people.”

As the sun began to rise, water was now touching the bottom of the mattress.

Unable to wait any longer, Renovato’s brother, who lives five streets away and on higher ground texted her and said he was coming to get them, using a bean bag as a float. He arrived with the bean bag and cooler to save a handful of personal belongings. They put her daughter on the bean bag, and began wading through the waist-high water to her brother’s house. After they showered  and dried out, they decided that not knowing how much higher the water might get, it was time to go to a shelter.

After realizing the huge blessing that was her brother’s sacrificial rescue, Renovato began to see the beautifual water of her dream take meaning.

“Everyone at the shelter was very nice to us,” she said.

They fed her and her family – hot meals prepared by Missouri Baptist Disaster Relief workers – and gave her clothes and other personal items.

She also got a text from her boss asking if she was OK. Yes, she replied, but there was three feet of water in the house and her car was flooded. “But I still feel blessed,” she replied back.

The blessing continued as her boss responded that he and his wife want to send her some money. Remembing the single dollar in her accound the outstanding check, she gratefully accepted, thinking they would give her $20 or $30. The gift was for more than that.

“God bless them both, but there was even more blessings than that,” Renovato said. “There was a still is help from everywhere. The Red Cross, the Salvation Army, Baptist Disaster Relief workers, churches helping, people donating and family and friends. People have donated clothes, shoes, gift cards, and so much more. FEMA help cam also, and it is enough to fix my home plus a a little extra for furnishings.

After a few days of bumming rides to and from work,