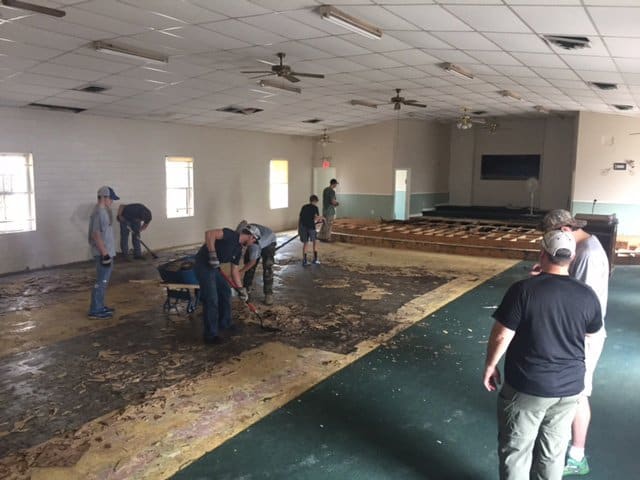 HOUSTON (BP) — Liz Neal kept talking to a woman driving a white F-150 pickup crawling forward in a food distribution line at Houston’s Farrington Mission. Two weeks after Hurricane Harvey devastated the region, hundreds of drivers — in a line that wrapped around the block and down the feeder road — came for basic food and household supplies.

And volunteers like Neal made sure they left with so much more.

For seven years the mission of Northeast Houston Baptist Church had served the city’s economically depressed Fifth Ward. And, now, when the community needed them the most, they couldn’t help.

In addition to the mission’s food and clothing distribution centers and community outreach programs, it houses the Source, a Christ-centered women’s medical clinic. Hundreds of clients receive life-affirming counseling and medical care each month, including 4-D ultrasound imaging of their unborn babies.

A tour of the facility reveals recovery work here is progressing faster than other parts of the building. Del Traffanstedt, NEHBC associate pastor, said the reason is obvious.

“We save babies every business day,” he told Southern Baptist TEXAN. “Every day we’re closed, we lose a baby.”

The church had just completed $21,000 in improvements “and it was all gone” after Harvey, Traffanstedt said. The $15,000 4-D ultrasound machine, which clinic staff scrambled to protect, may have been saved. Technicians inspecting the machine should have a prognosis soon.

It will cost $75,000 to repair the mission, with $40,000 of that going toward the clinic. NEHBC did not have flood insurance due to the prohibitively high cost, choosing instead to put money aside for the proverbial rainy day. 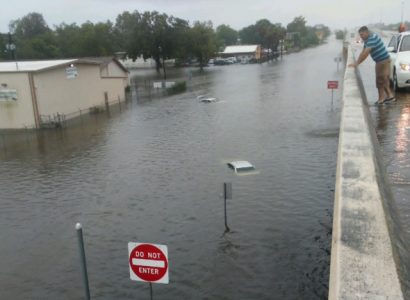 People observe flooding at Farrington Mission in Houston’s 5th Ward following Hurricane Harvey. The mission was closed until Sept. 9, but reopened to serve the community due to the help of church groups & individuals. BP Photo.

So it has been with a sense of urgency that volunteers from outside Houston and Texas have come alongside the church to gut, clear, clean and restock the facility. Supplies for restocking the shelves began arriving “while there were still fish swimming in the gym,” said Kristyn Roberts who, along with her husband Evan, volunteer as Farrington Mission intake directors.

Roberts began by collecting food and bedding from short-term shelters after they closed. Then the tractor-trailer, cargo vans and pickup trucks began to arrive. Two of the rigs pulled in the morning of Sept. 9. One of the trucks and an accompanying cadre of volunteers came courtesy of three Southern Baptist churches in Kentucky.

While repairmen continued their work in the food pantries and kitchen, the gym became the mission’s receiving and distribution center. Volunteers scrambled to unload and sort the supplies in an already crammed gym. From sorting newly arrived supplies to getting boxes to staging areas outside for distribution, volunteers prepared and handed out 429 boxes Sept. 9 filled with food, toiletries, bedding, cleaning supplies and, if needed, baby supplies.

And as volunteers filled cars with supplies, Neal and the NEHBC evangelism team made sure no one pulled away without hearing the Gospel.

“This is what our people do,” Nathan Lino, MEHBC’s pastor and president of the Southern Baptists of Texas Convention, told the Southern Baptist TEXAN as he pointed to church members, fists full of Gospel tracts and Bibles, moving from car to car checking on the occupants’ welfare — both physical and spiritual.

By noon, the Gospel had been shared with 2,000 people. On Monday, NEHBC received 10,000 more Gospel tracts overnighted from the North American Mission Board to continue their evangelistic efforts.

One of the recipients, Leester (pronounced Lee Esther) Francis, waited patiently under the awning covering the mission’s sidewalk. She, her daughter and her daughter’s three children, ages 23 and 11-year-old twins, are staying in a hotel while her home undergoes repairs with the help of her sons and brother.

“It’s God’s work,” she said of the storm and her displacement. “I serve the Lord. He [said] He would never leave you or forsake you if you serve Him.”

Another woman who had visited two other food distribution sites that week only to leave empty-handed arrived at Farrington hours before the 9 a.m. start time and left grateful for the provisions.

But even with the generous donations from across the country, it still was not enough. Supplies ran short with cars still lining the street.

Houston police officers, who had arrived at the mission once traffic flow surrounding it became more than the volunteers could handle, signaled for traffic on the feeder road to stop and for the white pickup to proceed. Neal stepped back from the truck as the female driver, provisions tucked into the truck bed, eased on.

Neal said the woman told her she was a believer but did not feel close to God. The current circumstances didn’t help. Neal encouraged her to read the Bible and Gospel literature she had given her and assured her God would draw close.

And Farrington Mission will be there.

Beginning Oct. 2 the mission’s normal operations will gradually resume. Mission volunteers continue to trust in God’s provision when they can’t see it. At the end of the Sept. 9 distribution there were enough boxes for 120 families, Lino said.

So the church prayed Sunday morning. By Monday morning two 18-wheelers and one cargo truck had already delivered food. Another 18-wheeler is expected before the Sept. 16 distribution.