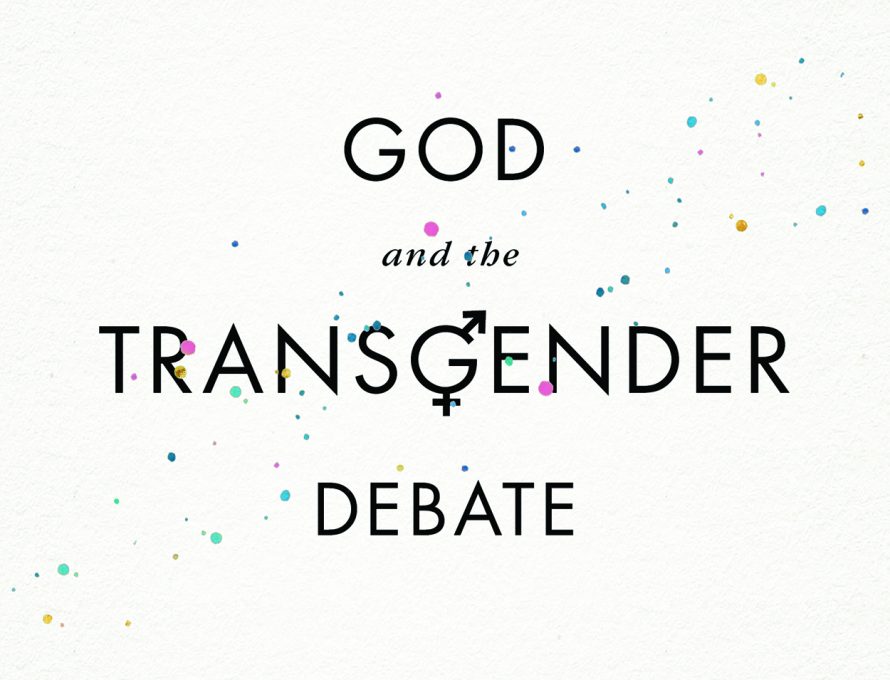 NASHVILLE (BP) – The transgender debate isn’t really about a debate but about people, a Southern Baptist ethicist says in his new book on the controversial issue.

The debate is about “precious people made in the image of God who are hurting, who are confused, who are angry, who are scared, who may have been told by their family that they are unwelcome,” Andrew Walker writes in “God and the Transgender Debate.”

To help people, Walker wrote on the subject not from a psychological, medical or political perspective but with the aim of letting “God’s voice be heard,” he says in the book, which is subtitled “What Does the Bible Actually Say About Gender Identity?”

The book, released Aug. 15 by The Good Book Co., addresses what has rapidly become a hot-button topic in American culture. The debate over how to think about the issue and respond to people who identify themselves as a different gender than their biological sex has played out in schools, restrooms and the military.

Walker – director of policy studies for the Ethics & Religious Liberty Commission – told Baptist Press the issue is about much more than a culture war.

“It’s about whether there are objective definitions of maleness and femaleness, motherhood and fatherhood,” he said in an email interview. “If we accept the transgender argument, then we are unraveling the essential binary that God designed for humanity – male and female.

“It’s also about helping vulnerable individuals who experience distress about their gender identity bring their mind into conformity with the truth of their body, and not make the wrong step of changing the body to conform to the mind,” Walker said.

“[W]e need to remember that there are real individuals who have psychological states that convince them that there’s an incongruence between their body and their sense of gender identity.”

In his book, Walker explains the biblical view of what it means to be male and female.

“Christianity doesn’t sever gender from sex, because according to the Bible, the unique ways that God made our bodies are tied to our gender roles,” he says.

Walker writes compassionately to people who are experiencing gender dysphoria – which refers to the discomfort a person may feel with his or her biological sex – and offers them the Gospel of Jesus and the path of discipleship. He also encourages Christians and churches to express both grace and truth on the issue.

Most people can be tempted “to treat this issue as particularly abnormal or freakish,” Walker told BP. “We have to reject that, and work to train our instincts to see our common story as one of mutual brokenness and our need for the Gospel.”

He says in the book, “A biblical response to transgender people is to see them as our neighbors; and then to love them, because they are our neighbors.”

For a transgender person, a church should be compassionate, listening, convictional, steadfast and gracious, he says in the book.

A transgender person “ought to feel more loved and safe visiting a Bible-believing church than in any other place in the world!” Walker writes. “A gender-dysphoric person should feel safer speaking about their identity and struggles in church than anywhere else – because they’re loved in church.”

Churches and pastors have particular responsibilities regarding the transgender issue, Walker told BP.

Pastors “need to preach regularly on the purpose of our humanity,” he said. “This will mean hitting topics that are culturally unpopular – among them gender and sexuality. I would venture to say that these are areas that need particular focus inside the church, as they are the issues that are under the most siege in the culture. If churches are not forming their people, the culture surely will.”

Youth pastors have an especially significant role in collaboration with parents, Walker said.

“Youth pastors need to cast a vision for the purpose of our sexuality that goes beyond truisms, stereotypes and awkwardness,” he told BP.

Teenagers need to know their design as male and female “has immense significance in God’s economy,” he said. “Our bodies demonstrate purpose and design, which we should receive gladly and not view as simply an instrument to bend to one’s will.”

The church also needs to equip parents to discuss the issue with their children, Walker said. “[B]ecause there’s so much newness to this debate, parents may be reluctant. They can’t afford to be any longer.”

“God and the Transgender Debate” is available at LifeWay Christian Stores, among other booksellers, and Amazon.