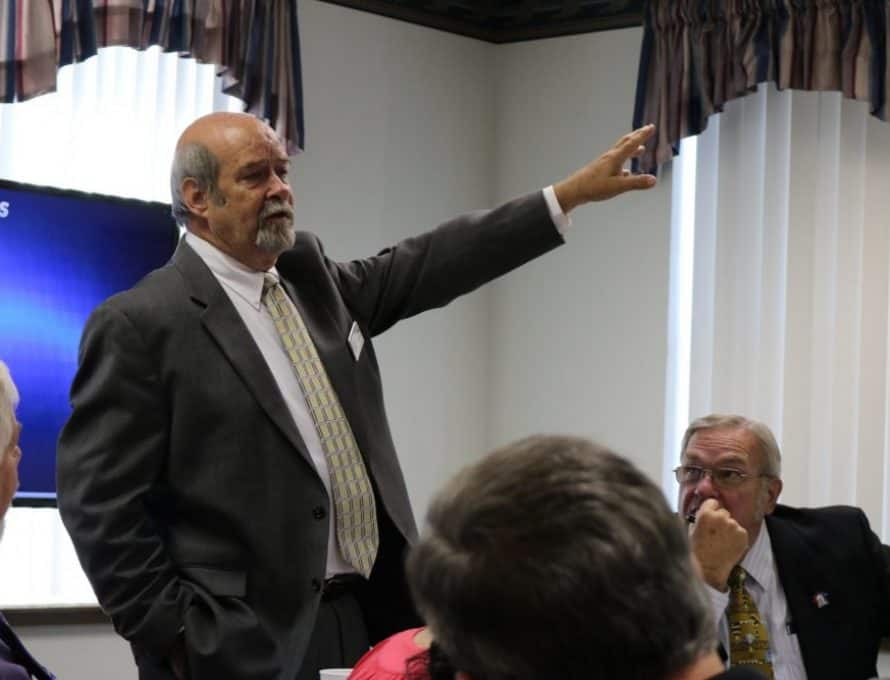 BRIDGETON – Ron Robinson, chairman of the MBCH Children and Family Ministry board, speaks to MBCH trustees at their July 25 meeting. Pathway photo by Brian Koonce

BRIDGETON – The Missouri Baptist Children’s Home (MBCH) made a statement for families and its place in Baptist life by affirming the 2000 version of Baptist Faith and Message during its July 25 board meeting here.

During an ongoing mission audit, MBCH leadership realized that despite being in operation and cooperation with Missouri Baptists since 1886, the ministry never adopted a formalized statement of faith. In order to shore up its identity and legal position for hiring Christians who believe in the MBCH’s mission, the board adopted the Baptist Faith and Message (2000) as its corporate statement of faith.

Russell Martin, president of the MBCH, said he and others were particularly drawn to what the BF&M says about the family. That section reads:

“God has ordained the family as the foundational institution of human society. It is composed of persons related to one another by marriage, blood, or adoption.

“Marriage is the uniting of one man and one woman in covenant commitment for a lifetime. It is God’s unique gift to reveal the union between Christ and His church and to provide for the man and the woman in marriage the framework for intimate companionship, the channel of sexual expression according to biblical standards, and the means for procreation of the human race.

“The husband and wife are of equal worth before God, since both are created in God’s image. The marriage relationship models the way God relates to His people. A husband is to love his wife as Christ loved the church. He has the God-given responsibility to provide for, to protect, and to lead his family. A wife is to submit herself graciously to the servant leadership of her husband even as the church willingly submits to the headship of Christ. She, being in the image of God as is her husband and thus equal to him, has the God-given responsibility to respect her husband and to serve as his helper in managing the household and nurturing the next generation.

“Children, from the moment of conception, are a blessing and heritage from the Lord. Parents are to demonstrate to their children God’s pattern for marriage. Parents are to teach their children spiritual and moral values and to lead them, through consistent lifestyle example and loving discipline, to make choices based on biblical truth. Children are to honor and obey their parents.”