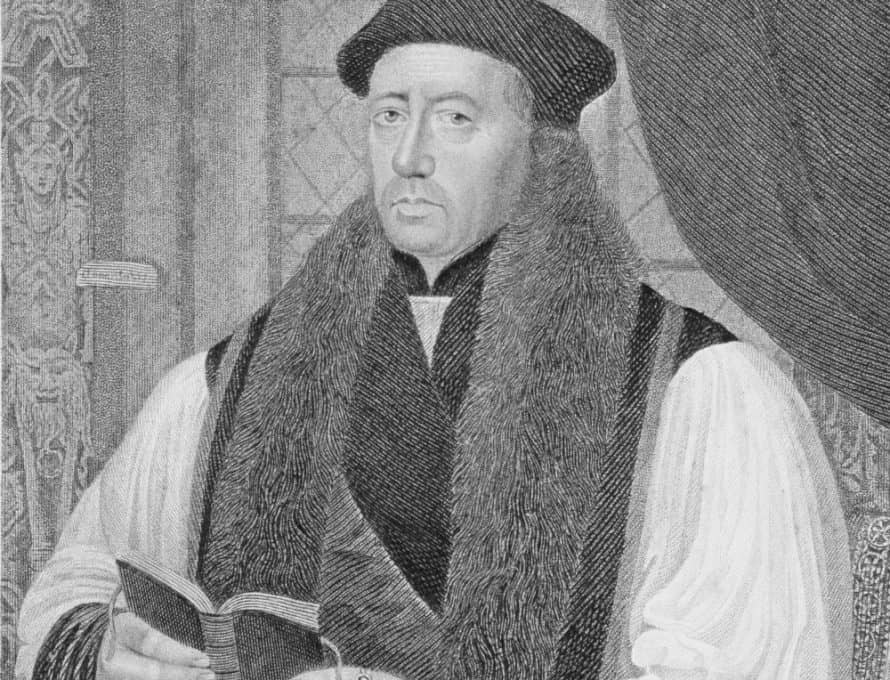 “God (the protector of all that trust in thee, without whom nothing is strong, nothing is holy), increase and multiply upon us thy mercy, that thou being our ruler and guide, we may so pass through things temporal that we finally lose not the things eternal; grant this, heavenly Father, for Jesus Christ’s sake our Lord. Amen.” – The English Book of Common Prayer, 1549

On the night of March 17, 1556, Thomas Cranmer, once Archbishop of Canterbury and now a prisoner condemned to die, slept. And as he slept, he dreamed. And in his dream, there stood before him two kings: his late master, King Henry VIII, and the eternal King Jesus Christ. As an early account of this dream tells us, Cranmer “had sought the goodwill of one of them in a life which was often chasing after power; from the other he pleaded for help after death.”

Indeed, throughout his life, Cranmer had sought the goodwill of King Henry VIII, and he received it. In the late 1520s and early 1530s—as Henry VIII sought to dissolve his marriage with his first wife, Catherine of Aragon—the young Cranmer pleased Henry by proposing that the king turn to the universities of Europe for support. Then, while Cranmer was on the European continent promoting the king’s cause, he was ordained Archbishop of Canterbury and was recalled to England, where he soon officiated the public wedding of Henry VIII and his new queen, Anne Boleyn.

Cranmer sympathized with the Reformers and, shortly before being ordained as an archbishop, married the daughter of the German Reformer Andreas Osiander—a fact that he hid for many years. Yet Cranmer only plodded along in his development as a Reformer, and he was willing to tarry for the sake of his king, who disliked Luther and held traditional religious views.

Nevertheless, by the king’s authority, Cranmer led the English church away from its allegiance to Rome and championed the king’s headship over the church. During the following decade, he faithfully served his king amid the flux of religious politics and a string of Henry’s new wives. The king would ultimately have 6 wives, who gave him three children: Mary, the daughter of Catherine of Aragon; Elizabeth, the daughter of Anne Boleyn; and, finally, a son and heir to the throne, Edward, whose mother Jane Seymour died soon after childbirth.

As Henry lay dying in 1547, Cranmer was at his side. And during the reign of Henry’s son, Cranmer was able to pursue reform of the English church more eagerly. Having been tutored by evangelicals, Edward VI, who came to the throne at the early age of 9, was compared to the biblical king Josiah. English Protestants hoped he would purge the land of what they saw as popish idolatry. Indeed, during this period, England became a home to Protestant refugees from continental Europe, including the famous Reformer Martin Bucer of Strasbourg. During Edward’s reign, Cranmer also produced his most lasting work: the 1549 English Book of Common Prayer (quoted above), followed by a significant revision in 1552.

But Protestant hopes for England would collapse suddenly in 1553, when the young king became ill and died. Four days later, through the working of Edward’s council, a new monarch was named—and not one of Henry’s children. Rather, the 15-year-old Lady Jane Grey reluctantly accepted the crown, urged to do so by the council and by her family.

But Jane’s reign lasted only nine days. King Henry VIII’s first daughter, Mary Tudor, paraded into England and was popularly proclaimed the rightful queen. Tragically, many of the ambitious men who compelled Jane to take the crown abandoned her—including her own father. And, though she gladly surrendered the crown to Mary, she couldn’t save her life. After bravely defending her evangelical beliefs, she was beheaded on the morning of Feb. 12, 1554.

A devout Catholic, Queen Mary desired to restore the pope’s authority in England and to expel the Protestant faith from the land. During her reign, 280 men and women accused of the Protestant heresy were burned alive at the stake—earning for the queen the name, “Bloody Mary.” And the English Protestant most despised by the queen was Cranmer, whom she begrudged for putting her mother to shame and for dissolving the church’s allegiance to Rome.

So authorities, after imprisoning Cranmer and condemning him to death, bent all their efforts to break his resolve and make him recant his evangelical faith. Indeed, he did recant and was forced to sign several documents stating his recantation. But even this wouldn’t save his life.

Then, on the night of March 17, he had his dream. He saw the kings, Henry VIII and Jesus Christ, and both kings rejected him. “Cranmer, shut off from both life and afterlife, could turn only to the mouth of hell,” historian Diarmaid MacCulloch writes in his superb biography of Cranmer. “There could be no more eloquent parable or expression of his torment.”

Although Cranmer would sign another lengthy recantation the following morning, a war still raged for his eternal welfare. More visibly, this war, as MacCulloch writes, was “waged among his own flesh and blood, between his two sisters”—one Catholic and one Protestant.

After enduring much emotional turmoil, something changed in Cranmer’s demeanor on March 20, his last full day to live. This day, MacCulloch says, was “oddly tranquil.” The following day, before facing the flames, Cranmer made a public confession of his faith. But he didn’t confess his renewed faith in the Roman church, as his captors expected.

“And now I come to the great thing, which so much troubleth my conscience, more than any thing that ever I did or said in my whole life, and that is the setting abroad of a writing contrary to the truth,” he declared. And with these words, he denounced all he had penned against the Protestant faith since his imprisonment, having written them “contrary to the truth which I thought in my heart, and written for fear of death, and to save my life if it might be.”

“And,” he said, “forasmuch, as my hand offended, writing contrary to my heart, my hand shall first be punished.”

Soon, Cranmer was pulled down from his pulpit and led to the fire. He was fastened to the stake with an iron chain and, after the wood was set aflame, he fulfilled his promise.

“Stretching out his arm,” the Protestant martyrologist John Foxe writes, “he put his right hand into the flame. … And using often the words of Stephen, ‘Lord Jesus, receive my spirit,’ in the greatness of the flame, he gave up the ghost.”