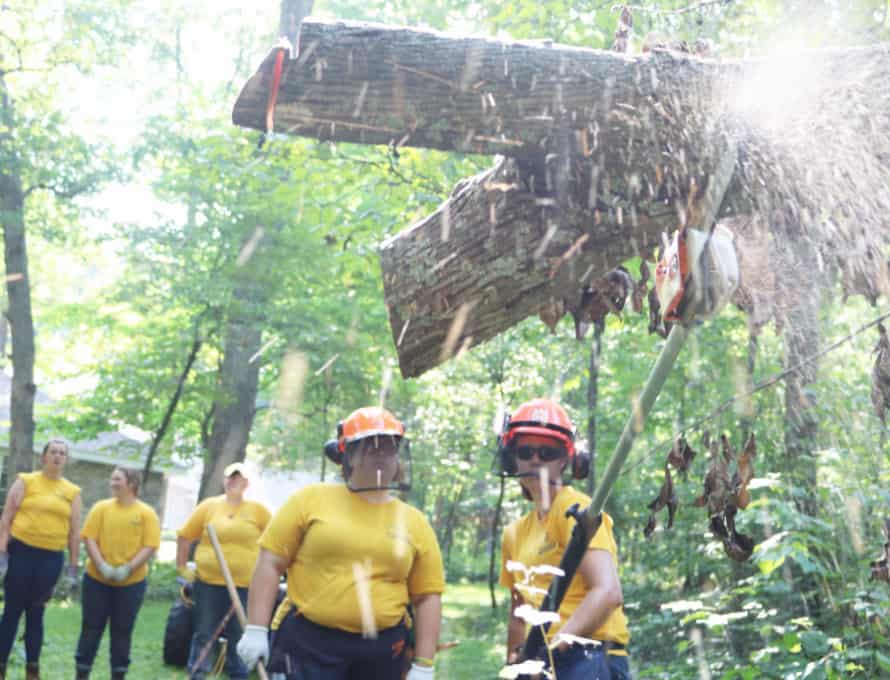 Five college students are serving through the middle of August as disaster relief interns, and in a twist from recent years, all of them are young women. Living in what can be charitably called spartan conditions for the summer and on call 24-7, the quintet trained in all areas of disaster relief – chainsaw, mud-out, mass care (feeding), childcare and shower/laundry.

Though it has been a relatively quiet summer as far as disasters go, the crew did deploy to Pacific for two weeks, working at Historic First Baptist Church helping it rebound from its second flood in 18 months.

“It was a big job for six ladies to do,” said Hannah Bartels, a student Southwest Baptist University, “but we worked through it.”

The church had been sitting empty six weeks before the interns cracked the doors and came in to tear the floors and walls.

“Every day for the first four days we’d walk in and it looked the exact same,” said Bartels. “Then you could finally start seeing our progress. They told us that if we hadn’t shown up, in three weeks later they were going to demolish it.

Yet even when the weather is calm and disasters are few and far between, the interns stayed busy and maximized the opportunity. They kept their skills – and saws – sharp volunteering around central Missouri taking down damaged trees, all the while remembering they were serving God, not man.

“The mentorship between me and Joe has been the biggest thing for me,” said Angie Jones, a student at Central Christian College of the Bible in Moberly. “It’s helped me rediscover who I am in Christ and remind me how I can use that to reach out to my friends and family who are lost.”

She is referring to Joe Banderman, who along with Ashley Palmer a graduate of the DR intern program, led the interns this summer.

“The summer of 2017 has not been typical,” he said. “We’ve done a lot more local responses and introspection. It’s been different, but good. You hate to ask for more disasters!”

Beyond drumming up interest among young people in Disaster Relief, learning to lead through service has been the theme of the DR internship program, a theme Banderman hopes to repeat next summer with a new group of interns. Any student who has completed one year of college is eligible to apply. For more information email jbanderman@mobaptist.org or go to http://mobaptist.org/dr/ for the application.