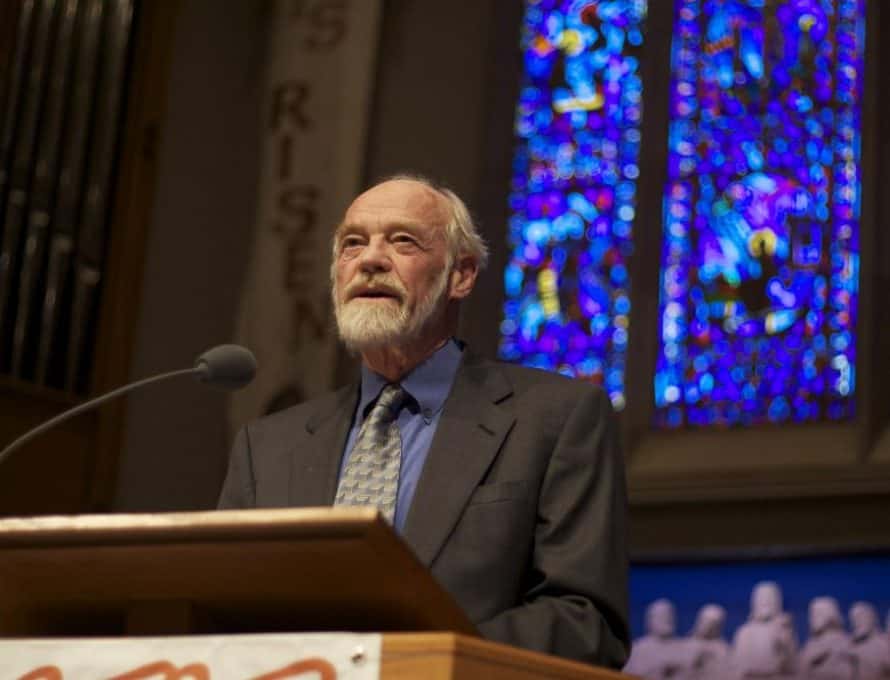 Last week, the well-known evangelical author Eugene Peterson appeared to embrace so-called same-sex “marriage,” and then, he backtracked. There’s a lot to talk about.

Last week Eugene Peterson, the author of “The Message” as well as several other pastoral books, said in an interview with Jonathan Merritt of Religion News Service that he didn’t consider homosexuality wrong and would, if asked, officiate a same-sex “marriage.” “I know a lot of people who are gay and lesbian,” Peterson said, “and they seem to have as good a spiritual life as I do.”

The reaction was swift and immediate. After all, Peterson is no minor figure. His work has influenced the faith of millions, and predictably, liberal circles hailed him as the most prominent evangelical figure yet to “evolve” on same-sex relationships.

I’m glad for this retraction, though his statements are still puzzling. Even more, they’re revealing.

First, they reveal the crisis of authority among evangelicals. So much of this conversation, and many others within the evangelical church, is driven by celebrities instead of doctrine. That’s not helpful at all.

Second, they reveal the need for clarity on another oft-repeated point: that there’s a massive shift among Christians on this issue. As my “BreakPoint This Week” co-host Ed Stetzer wrote last year in “Christianity Today,” rumors of the evangelical church caving to gay theology are greatly exaggerated. While some high-profile figures have “evolved,” most denominations and groups have staked out clear positions on the orthodox, biblical view of sexuality and marriage.

Third, Peterson’s original statement appealed, not to biblical teaching or theological argument, but to people and experiences. He echoed others like David Gushee, Senator Rob Portman, and Reverend Stan Mitchell, all of whom say relationships with gay friends or family changed their views.

Now, it would be one thing if people pointed to a new understanding of the Greek or Hebrew language, or the discovery of a some hidden, robust theological tradition. But it’s never that sort of thick argument cited by those who evolve—no, it’s always based on subjective experience.

As Tim Keller wrote, if you change your mind about homosexuality because you meet a friendly and intelligent gay person, your views probably weren’t based on a biblical theology of marriage to begin with. Feelings are no substitute for an informed Christian worldview.

As Samuel James pointed out at First Things, every single one of our Christian convictions—whether on sexuality, being kind to our enemies, abortion, God, hate, lust, or the meaning of life—will eventually collide with real life after the fall. “There is no safe corner of the Christian story that is completely intuitive or unfailingly neighborly,” he writes. Every claim of the Gospel can and will place us in conflict with unbelievers, especially in this cultural moment. The attempt to avoid all offense only leaves us in doctrinal no-man’s land.

And finally, this isn’t, as some have claimed, a side issue or something Christians can just “agree to disagree” on. From God creating us male and female and ordering marriage toward procreation, to Jesus’ reaffirmation of natural marriage in Matthew 19, to Paul’s clear language in his epistles, to the marriage supper of the Lamb, not to mention the way the Old Testament dealt with sexuality and sexual sin, the Bible consistently and unambiguously teaches one view of human sexuality. Marriage is so thoroughly woven into the story of redemption, any attempt to alter it distorts the Gospel.

Please join me in praying that Peterson would continue to reaffirm the biblical teaching for the right reasons, and let’s continue to pray for and call for renewed determination in the Church to stand on the solid rock of God’s word.