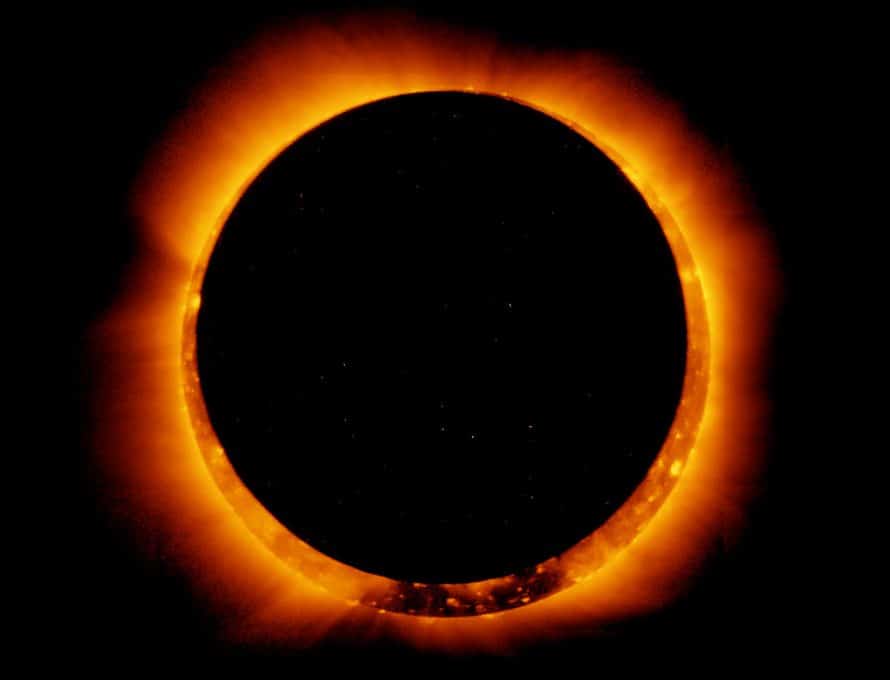 JEFFERSON CITY – On October 22, 2134 B.C., two Chinese astrologers failed to foretell the coming of a solar eclipse, and it sealed their fates. As legend tells, the astrologers Hsi and Ho were soon executed. For, in ancient China, an eclipse could bode ill for the emperor, especially if it hadn’t been predicted.

This earliest of recorded eclipses shows the awe and terror that the sun’s darkening has inspired among people both everywhere and always in human history. Even today, in China, drums roll and rituals are performed to frighten and drive away the dragon that has eaten the sky. And as in ancient China, the ancient Babylonians temporarily placed a stand-in ruler on the throne when a solar eclipse was expected to pass over them, so as to protect the true king from ill omen. Likewise, in modern day India, pregnant women hide indoors during the eclipse to avoid bad fortune.

In Western society also, the eclipse could stir up anxiety among people—a reality depicted in literature by Shakespeare’s plays. In the play King Lear, for example, one character observes, “These late eclipses in the sun and moon portend no good to us. … Love cools, friendship falls off, brothers divide, in cities mutinies, in countries discord, in palaces treason, and the bond cracked ’twixt son and father.”

Yet solar eclipses don’t always portend ill. In Pakistan, for example, the disabled are buried in the sand up to their necks as the eclipse passes over, motivated by a longheld belief that the event has healing powers. Likewise, the ancient Greek historian, Herodotus, reported how a solar eclipse once halted the onslaught between two warring kingdoms and inspired them to come to terms for peace.

But Christians today can especially look at the solar eclipse with wonder and joy, seeing it as an expression of the power of God, the Divine Designer. Writing in a column anticipating the Aug. 21st eclipse, Eric Metaxas, a Christian author and cohost of the Colson Center’s “Breakpoint” program, explained:

“This rare event is more than just an amazing light show and a way of escaping execution by superstitious medievals. It’s also one of the most dramatic pieces of evidence that our planet and solar system were not accidents, but were designed by God.

Sarah Chaffee at Evolution News and Views cites astronomer Guillermo Gonzalez and philosopher Jay Richards, who argue that our place in the cosmos is designed for discovery. That’s the subtitle of their book, The Privileged Planet, in which they document how vital total solar eclipses are to science.

For example, these phenomena were key in validating Einstein’s theory of relativity, which predicted that gravity bends light. By observing stars that are invisible except during an eclipse, astronomers were able to watch the sun bend their light, making them appear out of place in the sky, and confirming Einstein’s prediction. Eclipses were also how man first observed solar flares and coronal mass ejections on the surface of the sun. These phenomena are normally invisible to the naked eye, but appear briefly around the edges of the moon during an eclipse.

It turns out the conditions for this dazzling display are incredibly rare. The moon has to be just the right size, orbiting a planet just the right distance from its host star. And it so happens that although the sun is 400 times bigger than the moon, it’s also (coincidence?) 400 times further from us, meaning that the two objects appear roughly the same size in the sky. This allows the moon to block the sun in precisely the right way for scientists to study the solar atmosphere.

And of course, all of these conditions must be met on a planet that also supports intelligent life capable of appreciating the eclipse. The Earth, conclude Gonzalez and Richards, is uniquely suited as an observatory for such astronomical wonders — almost as if it were designed for that purpose.

Amazingly, many remain unconvinced. Writing at Phys.org, David Dickinson denies that all of this planetary engineering suggests intelligent design. He calls the many preconditions necessary for solar eclipses a “happy celestial circumstance.” In an article for the Wall Street Journal last year, I used a different term for our place in the universe: miracle.

Folks, ours truly is a privileged planet, and not just because it’s the only place in the known universe where life exists and thrives. It’s also uniquely-situated to give us a front-row seat on some of the most spectacular and scientifically useful sights in the heavens. We were placed here to discover. And that fact eclipses even the wonder of watching the sun disappear.”