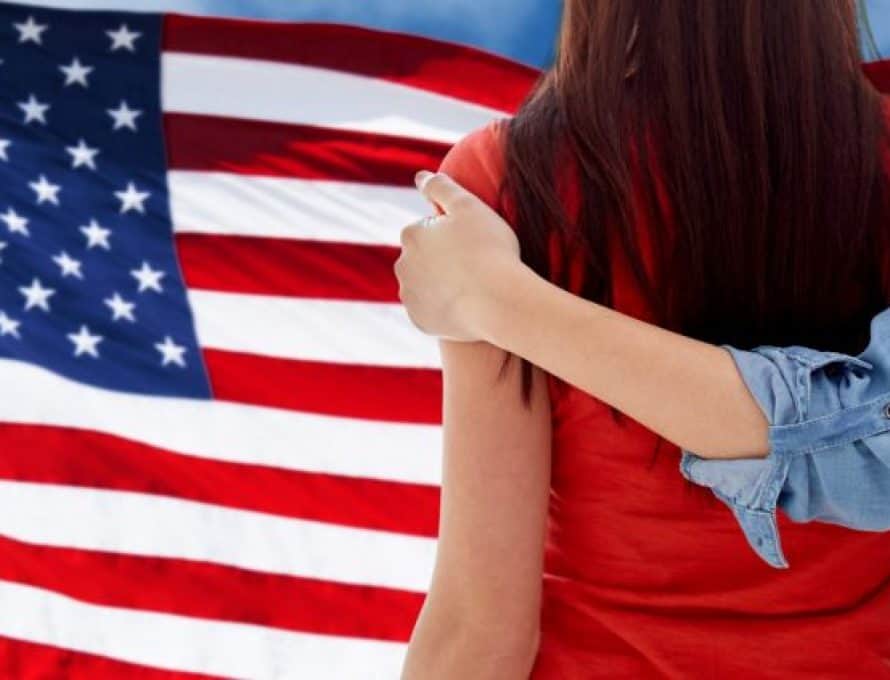 NASHVILLE (LifeWay) —Americans love to fight about sex and religion. From shacking up and same-sex marriage to birth control and bathrooms, Americans disagree about what is right and wrong with sex—often based on faith. Those disputes can end up in court, in highly divisive and controversial cases. Recently, the U.S. Supreme Court agreed to hear the case of a Colorado baker who refused to make a cake for a same-sex wedding.

When faith and sexuality clash, which side should prevail? 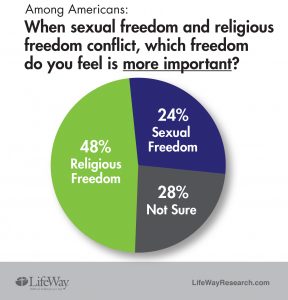 LifeWay Research’s study is based on new analysis of a survey of 1,000 Americans. Researchers wanted to get a big-picture look at how Americans view conflicts between religious views and sexuality, McConnell said.

They found Americans’ views are divided by geography, religious beliefs and demographics.

Men (30 percent), those in the Northeast (33 percent), Hispanic Americans (31 percent), and those 18 to 44 (30 percent) are more likely to favor sexual freedom. So are nones, those with no religious affiliation, at 49 percent.

Southerners (53 percent), those with evangelical beliefs (90 percent), Protestants (68 percent), African-Americans (58 percent) and those 55 and older (55 percent) are more likely to favor religious freedom.

About a quarter (28 percent) are not sure.

Americans with evangelical beliefs are more likely to say religious freedom always matters most (74 percent). So are those who attend religious services at least once a month (56 percent).

Nones (22 percent) are more likely to say sexual freedom always matters most. So are those who attend services less than once a month (13 percent) and those from non-Christian faiths (15 percent).

One other major question for LifeWay Research: Do Americans think religious believers are motivated by hate or faith in disputes over sexuality? 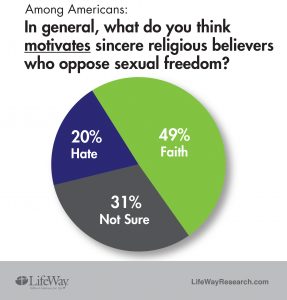 About half say faith (49 percent) is the main motivation.

“About one in five Americans—often those who aren’t religious—suspect these disputes are driven by hate,” McConnell said. “And a third aren’t sure. That’s concerning.”