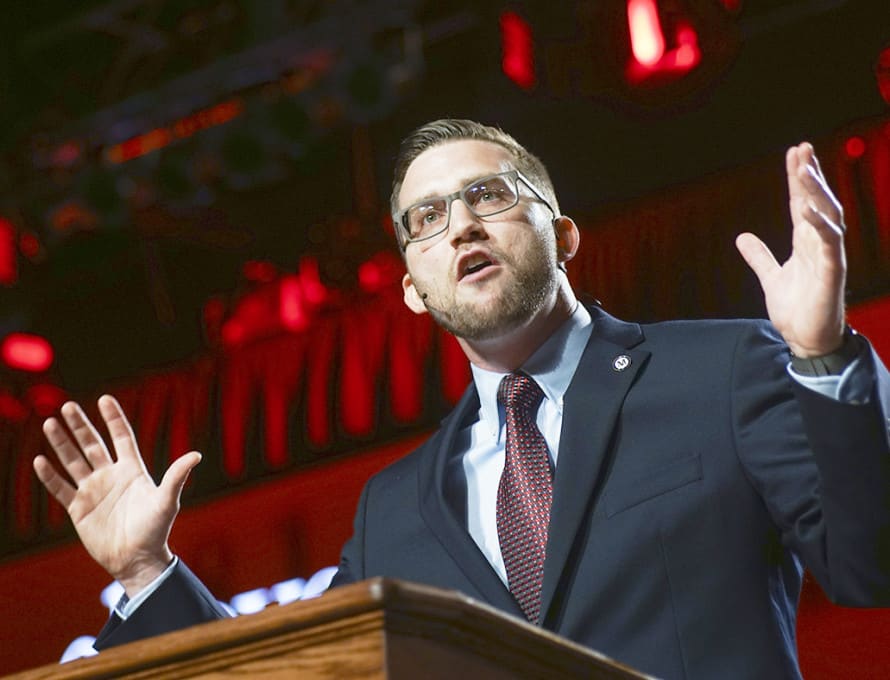 PHOENIX - Nathan Rose, pastor of Liberty Baptist Church in Liberty, Mo., speaks during the morning session of the June 12 Pastors' Conference at the Phoenix Convention Center. He used the text Philippians 2:5-11. BP Photo by Bill Bangham

PHOENIX – Dave Miller, president of the 2017 SBC Pastors’ Conference, said “We went for simple this year.”

The conference was organized for the first time with a focus on enlisting preachers from smaller membership churches (less than 500 attenders). And the pastors were tasked to preach expository messages through the Book of Philippians. Miller was elected at last year’s conference with a pledge to build a conference in this manner.

He is the pastor of Southern Hills Baptist Church in Sioux City, Iowa. The church has an average attendance of about 250.

Miller said he was overjoyed about being able to book the musical artists The Gettys to lead the worship times. That happened through a series of contacts that began during last year’s SBC meetings in St. Louis.

He also praised the 12 preachers enlisted by his fellow conference officers and other committee members. “They are not well known, but they are good preachers” he said.

“One of the things we’ve tried to do is demonstrate there is quality going on in smaller churches. These are good people. The selection pool was narrowed down, we listened to sermons, made our choices.”

Rose spoke on Philippians 2:5-11 – also known as the “kenosis” passage. He proclaimed that when Jesus “emptied” Himself on the cross, he was embodying three realities: 1) the Incarnation of the Son of God, 2) the Crucifixion of the Savior and 3) the Exaltation of the Son as the Vindicated King.

He shared that when Charles H. Spurgeon was aged 22, he almost quit the ministry. He was preaching to thousands of people in London, England. But at one of the meetings someone yelled out falsely “Fire!” People panicked and pushed for the exits. Seven people were trampled to death. Spurgeon was depressed and discouraged. But God used Philippians 2 to help him recover. He meditated on it and called it a “sweet consolation” and “a remedy.”

Rose concluded, “Pastors if you get discouraged, meditate on this passage and find your remedy.”

Rose told The Pathway that he considered the invitation to preach at the pastor’s conference an indescribable honor, given the conference’s role in shaping the SBC conservative resurgence.

He serves in suburban Kansas City. The church is made up of 220 attenders whom Rose described as “young and affluent.” He said they “try to incorporate basic historical elements into their Christian worship each Sunday. I am an expository preacher, trained that way at Midwestern Baptist Theological Seminary.” He is a Ph.D candidate in historical theology.

Between the expository sermons The Gettys, classic hymn writers and singers from Scotland and Ireland led the group in worship which was described as “lilting and majestic.” Several pastors of larger churches gave brief testimonies and there were messages by sponsors of the conference including the Caskey Center of New Orleans Baptist Theological Seminary, who provides assistance toward the education and development of pastors for smaller membership churches.

Spencer Plumlee, of Osage Beach, preached on Paul’s admonition to “run the race set before you” in Phillipians 3:12-16. He said conversion to Christ is not the finish line, but rather the starting line. “There are more laps to go!” he added. “We are called to an urgency in Christ.”

He developed the text by sharing three dimensions to victorious urgency by: 1) Connecting to Christ, 2) Embracing our role in following Jesus and 3) Surrendering to God’s Conviction.

Plumlee told The Pathway that Riverview Baptist Church is in a tourist area of Missouri, near Lake of the Ozarks. “We have our share of tourists in the summer,” he said. “But our church operates year round with natives of the area, retirees who have moved to the area and service workers who operate the hotels, restaurants and resorts.”

“They all have distinctive contributions to the church,” Plumlee said.

He and his wife, Shelley have served there about four and a half years, moving there from Texas.

Miller told The Pathway he was most pleased the conference was able to offer 62 scholarships of $1,000 each to pastors of smaller churches. Corporate sponsors and churches provided these travel funds.

Jim Luders, pastor of Lincoln St. Baptist Church, Mt. Pleasant, Iowa, was one of the recipients.

“It means I can actually attend. It would not have been possible without this. It is exciting to get to hear these great preachers,” he said. Luders lives in Cedar Rapids, Iowa and drives about 75 miles south each Sunday to preach in the Mt. Pleasant church which generally runs about 10 attenders.

For this year at least, smaller church pastors were highlighted and featured. Considering most SBC churches fall into this category, it seemed only fitting that the lesser known pastors from lesser known places had “their conference.”