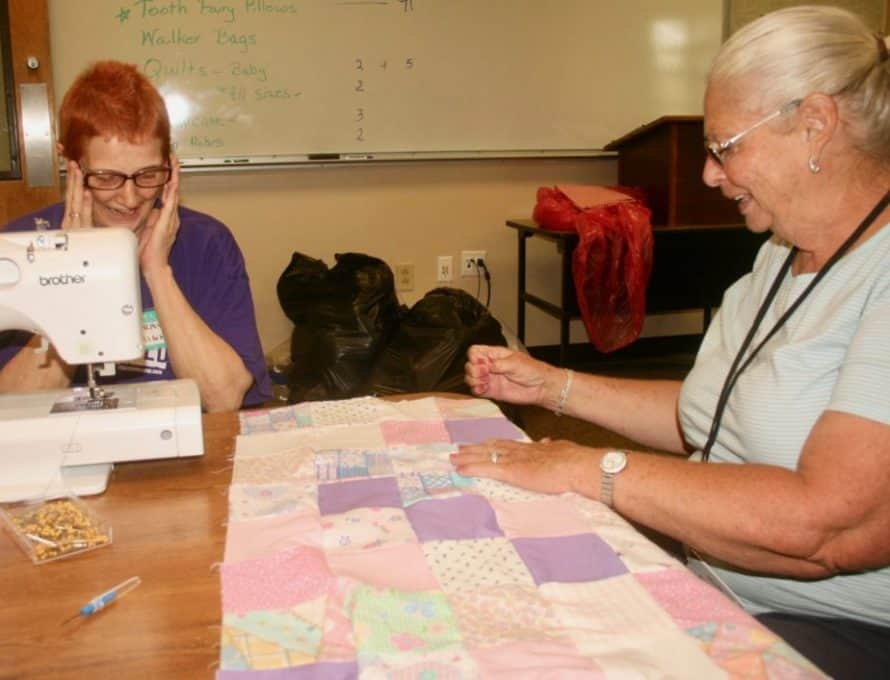 HANNIBAL – Three loves are evident in a regular mission team to Hannibal-LaGrange University: The Lord, the School, and each other.

For the 22nd year, the Gasconade Valley Baptist Association and partnering Campers on Mission were on campus to assist in some summer projects June 5-9.

“I love the Lord. Volunteers meet the gap where the work needs to be done,” said 20-year team member Robert Simpson of High Ridge when asked why he returns.

Team co-coordinator Delmar Branson said projects included painting doors, handrails, and fences at various places on campus; removing damaged carpet in one building; moving dorm room beds out so floors could be waxed; modifying a wall, and removing ceiling tiles and light fixtures in a student lounge being renovated, and some floor repair.

“We’re winding things down today,” Branson said June 8. Indeed, there were over a dozen red check marks on the project list.

Belinda Branson also helped Sarah Wright make a baby blanket for a great-grandchild. Wright had never been on such a mission trip and had never sewed.

“I will be back next year, if the Lord is willing,” said Wright, who gushed with delight when she finished part of her blanket.

Delmar Branson said 38 team members made the trip to HLGU this year, down from 50 they have had in recent years.

Team member Lynn Gay has only missed last year in the trips, due to truck mechanical problems. She used to help paint, but now does sewing and music and evening devotion preparation.

“I love the Lord and it (the work) helps the young people. The people (in the group and at the College) keep us coming back,” Gay said.

Shelba Knight is another long-term team member. She found delight this year when town people welcomed her back with a hug. One business donated material for sewing upon learning what the team was doing.

Dorothy Sisson was one of two participating alumnae who attended when Hannibal-LaGrange was a two-year school.

“It’s a privilege to come back to help my alma mater. I’ve done some painting before, now I mainly do sewing,” Sisson, a 1958 graduate said.

Gerry Dehner, a 1955 graduate and former employee was back with her husband Don, also a former employee. For the mission trips she did sewing, and he worked on the campus projects.

“It (HLGU) has become part of our heart. Anytime we get an opportunity to do something for the campus, we try to take part. We give to it, we pray for it, and we come and help,” Dehner said.

“Every summer for the past 22 years, the volunteers of Gasconade Builders have served on the campus of Hannibal-LaGrange University. Performing a wide variety of repairs and general maintenance tasks like painting and cleaning, they are tireless and enthusiastic in their service. We are so very grateful for their hard work and faithfulness. We want to say a sincere and heartfelt ‘Thank You’ for their assistance and the continued investment they make in Christian higher education and Hannibal-LaGrange University.” said HLGU President, Anthony Allen.