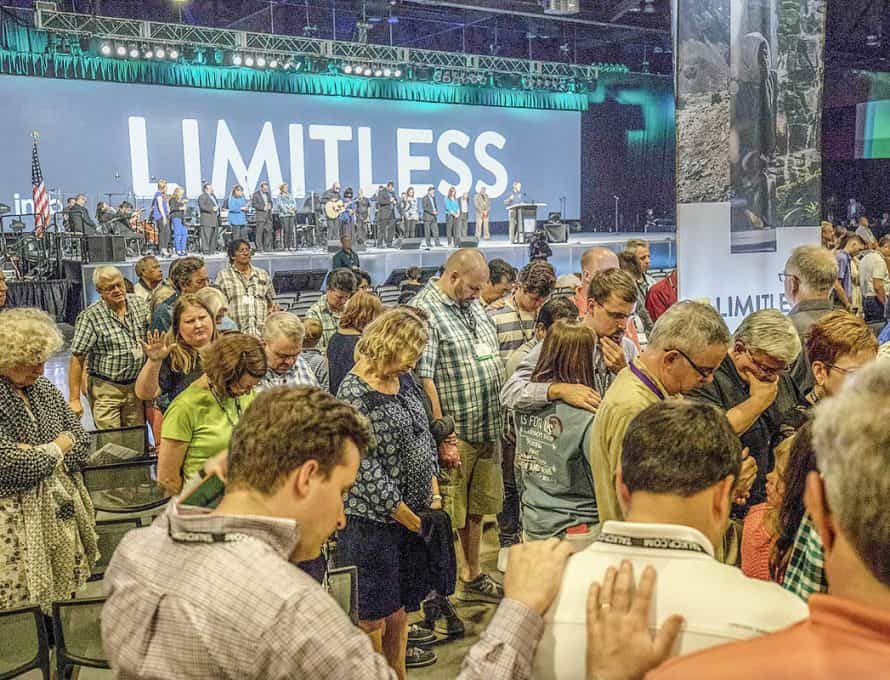 PHOENIX – Messengers to the 2017 Southern Baptist Convention annual meeting pray for 31 new International Mission Board missionaries as they are commissioned. BP photo by Matt Jones

“That’s breathtaking: over $250 million given from Southern Baptist churches for the spread of the Gospel among the nations,” Platt said. “And as a result of that giving, I am glad to report to trustees and the broader SBC that IMB is standing on firm financial ground.”

In addition to the financial update, IMB trustees approved the appointment of 31 missionaries; recognized 10 trustees as they completed their terms; and elected 2017-2018 officers during their meeting held in conjunction with the June 13-14 Southern Baptist Convention annual meeting in Phoenix.

“A couple of years ago, we said our goal was to work to get to a position of short-term financial responsibility and long-term organizational stability, and by God’s grace, we are there,” Platt reported.

“Now some might wonder, ‘The Lottie Moon Offering was less than last year, and even just under your Lottie Moon campaign goal … so will IMB have a deficit for the 2017 fiscal budget year?’ And the answer is, due to our current expenses also trending below our budget for the year, we do not anticipate an overall deficit for the fiscal year,” Platt said.

Trustees in their support services committee reviewed IMB’s 2016 audited financials and its current financial position, including the core principles in the organization’s financial management: to present a balanced budget each year; spend 100 percent of Lottie Moon receipts overseas every year; do not use proceeds from property sales for operations; and maintain IMB reserves at appropriate levels.

Platt confirmed in the trustees’ plenary session that every dollar Southern Baptists give to the Lottie Moon Christmas Offering “is going to the nations.”
With the mission board healthy financially, Platt said the stage is set for Southern Baptists to send more missionaries.

The 31 new missionaries approved by the trustees were appointed during a Sending Celebration June 13 during the evening session of the SBC annual meeting at the Phoenix Convention Center.

Trustees recognized the service of outgoing trustee chairman Scott Harris, missions minister at Brentwood (Tennessee) Baptist Church, and nine other trustees completing their terms. Hance Dilbeck, senior pastor of Quail Springs Baptist Church in Oklahoma City, was elected as trustee chairman for 2017-2018. The next IMB trustee meeting and Sending Celebration will be Sept. 12-13 in Ridgecrest, N.C., in conjunction with IMB’s celebration of emeriti personnel.