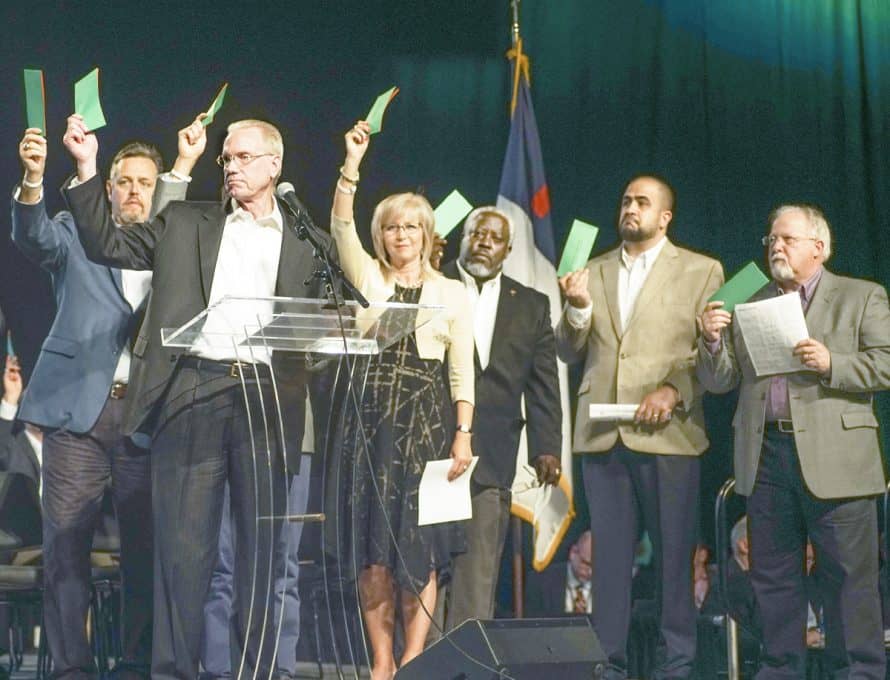 PHOENIX – Southern Baptists overwhelmingly pass a resolution June 14 condemning the racism of the alt-right movement. Members of the Resolutions Committee that crafted the resolution, led by Barrett Duke (center), chairman, and executive director of the Montana Southern Baptist Convention, vote for its passage. BP photo by Bill Bangham

I first attended the Southern Baptist Convention meeting in 1982, early in the days of the Conservative Resurgence. The next few years saw some of our best-attended and most contentious meetings. In those days, news media from everywhere descended on our meeting sites, trying to figure out who we are and what we’re doing. They mostly failed; we are notoriously hard to understand.

Then and now, the aspect of convention business most comprehensible to non-Baptist observers is the resolutions. It is here that the heart of the messengers is most plainly expressed. The emphasis among outsiders always tends toward topics the reporters already understand: boycotts, political issues, moral outrage and the like. We were often ridiculed for our moralizing, but I’m not embarrassed to have been a part of those votes. Outsiders who would understand Southern Baptists would do well to read the resolutions year by year, even the “boring” ones. Resolutions are our best effort to discern the times, and to address with positive effect needs and trends of our churches and our neighbors. Our 2017 slate of resolutions is a fine example of how our denominational heart is expressed. Consider the 10 resolutions passed during our 2017 meeting in Phoenix.

On the Importance of Moral Leadership

Some will read this resolution and see a criticism of only those with whom they disagree; but it’s intentionally not written that way. This resolution calls all of us to the high standards of the God who appoints kings, pastors and church members. Southern Baptists are committed to personal holiness, starting with ourselves but reaching outward to the most powerful among us. Because we have a biblical understanding of holy God and fallen man, we know that we are susceptible to temptation. We also know that God is the judge of all men.

On the 500th Anniversary of the Protestant Reformation

While not Protestants, Baptists are nonetheless children of the revolution of the 16th century. The radical return to biblical authority and salvation by grace through faith caused millions to stumble and millions of believers to rejoice in the centuries that followed. Surprisingly, the theological issues of the 16th century arise in our day.

On the 100th Anniversary of the SBC Executive Committee

This committee is our “decently and in order” body. Our ancestors organized for growth, believing that God can bless those who plan. Southern Baptists are grateful for those who built the foundations of our modern work, and we are reminded of our obligation to future generations who will build on our current efforts.

On the Necessity of Penal Substitutionary Atonement

The most basic elements of Christian doctrine must be reemphasized when some who call themselves Baptist deny them. This resolution cites Scripture 20 times. Baptists know that biblical theology undergirds our missionary work. There is no gospel ministry if we do not know the gospel.

Here we see a call to personal and corporate devotion. Prayer is recommended as the command of God and the power for our ministry. Baptists are mystics who believe that the invisible Maker of the universe works through the prayers of his people.

Our “comprehensive approach to evangelism and discipleship” must include university campuses. It is here that our culture is most crucially engaged with the gospel. Southern Baptists are on mission for the lost in the most difficult places imaginable.

We always include a resolution thanking the host city and its churches. Writing thank you notes is basic though uncommon courtesy, an expression of gratitude for the way God provides through other people. We roll into town after thousands have prepared the way for us. The work falls heavily on a smaller state convention, like Arizona. Southern Baptists, on our best days, appreciate the kindness and generosity of those who serve us.

On Defunding Planned Parenthood and On the Sin of Gambling

The most basic elements of Christian doctrine must be reemphasized when some who call themselves Baptist deny them. This resolution cites Scripture 20 times. Baptists know that biblical theology undergirds our missionary work. There is no gospel ministry if we do not know the gospel.

On the Anti-Gospel of Alt-Right White Supremacy

Another prophetic word but also one that speaks to those within our fellowship who hold racist attitudes. This is a great example of a snapshot of our current year. Issues, even groups, become prominent and in this case, toxic. This is the convention taking a timely stand. Southern Baptists believe, to quote President Steve Gaines, “There is one race, and that is the human race.”

Every year’s slate of resolutions is unique to the convention seated for that meeting, but this year’s slate is not atypical. This report touches the issues of the day, even though those issues may be unique to a particular time. Resolutions are important as a record, not of our actions so much as our denominational mind year by year. Those from inside and outside our fellowship who would ask “What happened at the SBC this year?” will have a pretty good answer if they’ll start by reading the resolutions.