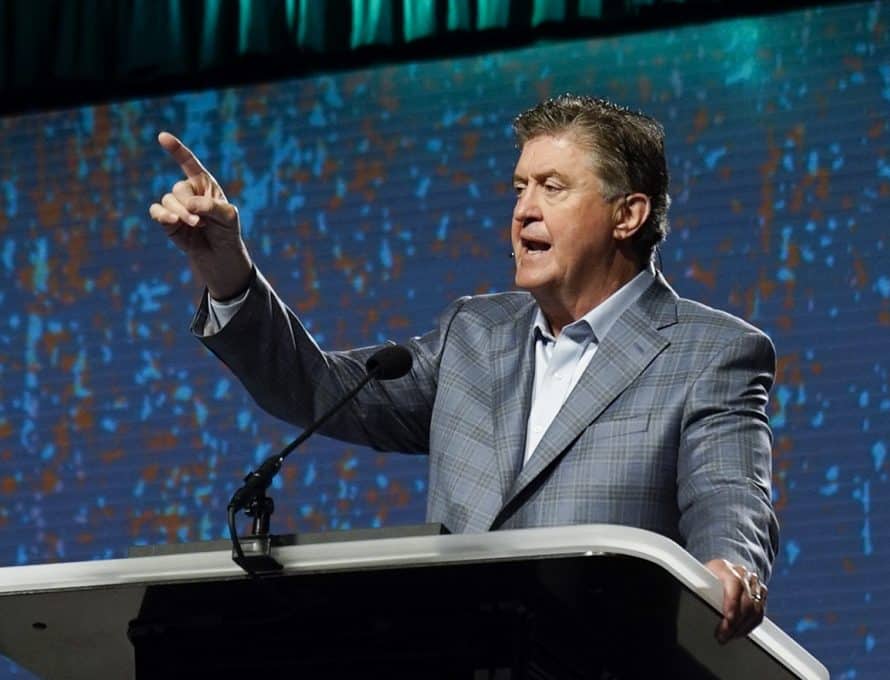 Steve Gaines, president of the Southern Baptist Convention, gives the president's address during the first day of the SBC annual meeting June 13 at the Phoenix Convention Center. BP photo by Adam Covington

PHOENIX (BP) – Appointment of a task force to study how Southern Baptists can be more effective in evangelism and a resolution decrying “alt-right white supremacy” were among highlights of the Southern Baptist Convention annual meeting June 13-14 in Phoenix.

The unofficial total of 5,018 registered messengers, down from 7,321 last year, expanded representation on the Executive Committee to include four states or defined territories which had not previously qualified for representation under Bylaw 30. Southern Baptists also gave the EC authority to sell the SBC Building in Nashville and received a multimillion-dollar gift through the Cooperative Program from the Florida Baptist Convention stemming from the sale of its building in Jacksonville.

When registered guests, exhibitors and others were included, the count of those at the annual meeting was tallied, as of June 15, at 9,318.

A vote to approve the resolution June 14 was followed by a standing ovation from messengers.

Among 11 Executive Committee recommendations approved by messengers was one authorizing the EC “to continue studying the advisability of a sale of the SBC Building, and to sell the property upon such terms and conditions, and at such a time, if any, as the Executive Committee may hereafter approve.”

Messengers made 11 motions. The only one to receive approval at the annual meeting was the proposal to create an evangelism task force. Two motions were ruled out of order, and eight were referred to SBC entities or committees.

Among motions to be referred were a proposal to study merging NAMB and the International Mission Board and a request that NAMB, the IMB and LifeWay Christian Resources consider expanding their trustee boards to grant broader representation. A motion to let messengers consider defunding the Ethics & Religious Liberty Commission was ruled out of order because it was made after the convention approved the 2017-18 CP Allocation Budget, which establishes the percentage of CP receipts distributed to each CP-funded entity.

SBC President Steve Gaines, who was reelected to a second term, recommended creation of the evangelism task force to study how Southern Baptists can be more effective in personal soul winning and evangelistic preaching. North American Mission Board President Kevin Ezell made a motion, later approved by messengers, that the convention authorize Gaines to appoint the group.

In the annual meeting’s final session, Gaines announced the members of the 19-person task force, including chairman Paige Patterson, president of Southwestern Baptist Theological Seminary. The group will report to the 2018 SBC annual meeting in Dallas.

Creation of the task force was in keeping with an evangelism emphasis in Gaines’ presidential address. “I want to encourage you to be a soul winner,” said Gaines, pastor of Memphis-area Bellevue Baptist Church in Cordova, Tenn.

A Tuesday-evening message by California pastor and evangelist Greg Laurie urged preachers to extend public invitations for people to follow Christ whenever they proclaim the Gospel. In his message, Laurie announced that Harvest Christian Fellowship in Riverside, Calif., where he is pastor, has begun cooperating with the Southern Baptist Convention.