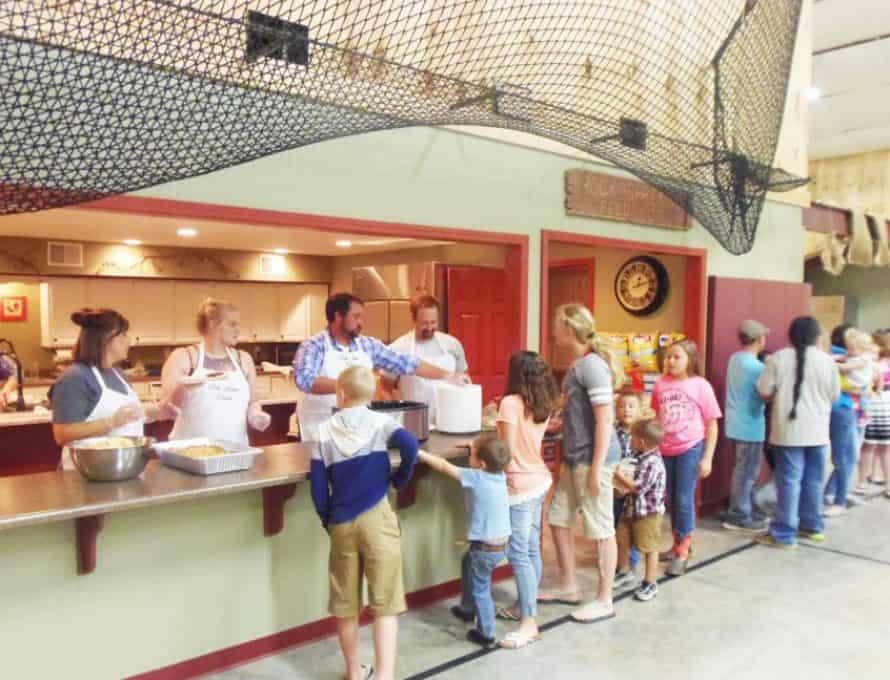 LICKING – Members of Rock Springs Baptist Church here serve dinner to the hundreds of young people who come to the church each Wednesday night.

LICKING – The numbers, humanly speaking, don’t add up. Rock Springs Baptist averages 120 in Sunday services. Yet on Wednesdays, they run about 180 in student ministry.

“It’s a God-thing. It has nothing to do with me. I’m just blest to come in at the onset of this,” Pastor John Jordan admitted.

“There was the regular prayer and Bible study, and a few kids came. They decided to put their effort into student ministry, based on Psalms 78:4 which says, ‘We will not hide these truths from our children; we will tell the next generation about the glorious deeds of the Lord, about his power and his mighty wonders. (NLT)’ They started pouring into Wednesday nights and started with 30-40 students,” Jordan said.

“The Lord impressed on them to borrow for an addition. They didn’t want to borrow, but they stepped out in faith after praying. We’re a rural country church. To hear the folks tell the story is amazing, You hear their passion.”

Wednesday nights during the school year, they feed the kids and share Bible stories. There is no entertainment. The Lord continues to bring the students in. There are now eight age and gender segregated classes led by teachers of the same gender.

In addition to a dozen teachers, a comparable number prepare the weekly full meals for the students.

“They love on the kids, tell them Jesus loves them, and ask how their week is going. They fix the meal as if they were doing it unto the Lord. This group of folks has a mind to work and they see the impact they are having on their community.” Jordan said.

The term “student ministry” is all encompassing.

“We used to say ‘if we win the father, we’ll win the whole family. Some don’t have families so they decided to reach the children. We’re all students of the Word.”

“The Holy Spirit did not allow my wife and I to start a Wednesday Bible study, saying it would happen later.”

“My wife began telling them the Easter story. We now have two ladies bible study classes. About a year ago, some men said the women came home telling bible stories and they wanted one too, so we have a men’s bible study.”

Jordan said statistically, a third of people come to Christ at a young age.

“A lot of times in church we don’t invest in children and students, but that’s when many come to faith in Christ. Pastor friends ask how we pay for it. The Lord provides. We make the student ministry meal and literature costs part of the budget.”

The building has been paid off.

“The initial cost was $100,000. They had a vision to do something big for the Lord and they have an amazing kitchen. But that doubled the cost.

Rock Spring, like the area schools, is now on summer vacation. When they prepare for the fall, Jordan said members always talk about how God has blessed them when they stepped out in faith.

“We just try to be faithful and work hard,” Jordan said.