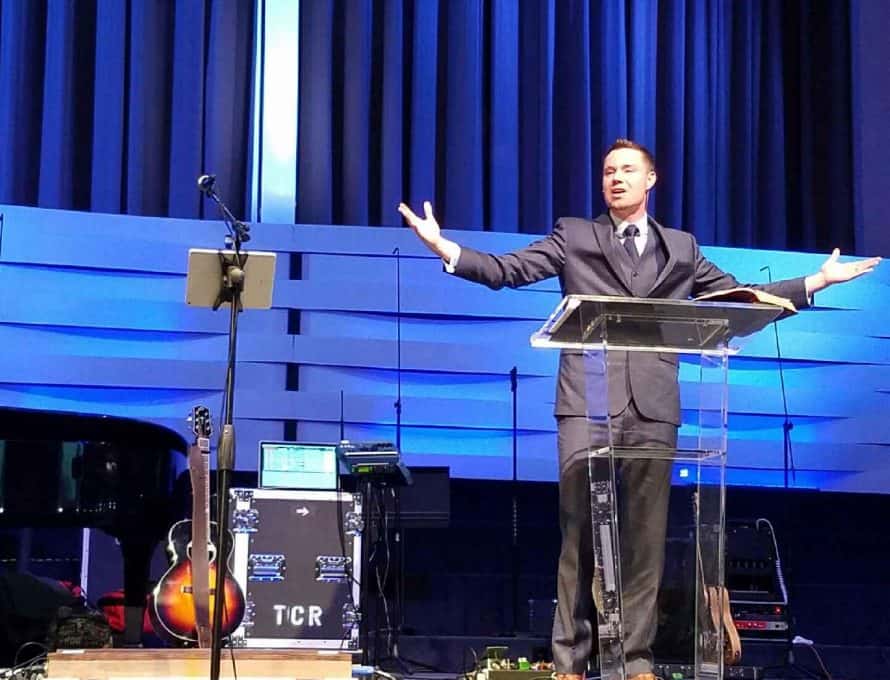 CLEVER – Brian Jump, pastor of First Baptist Church here, came to faith in Christ to a large degree because of his wife’s faithful testimony. Photo courtesy of Brian Jump

CLEVER – Leading up to the point of his salvation, Brian Jump was living a lie.

“If you would have asked me if I was a Christian, I would have said yes,” said Brian, pastor at First Baptist Church Clever. “I was a kind of pseudo Christian. I just blended in and did what everyone else was doing. I convinced myself that my lack of passion was because I hadn’t been properly discipled. I felt convicted after every sermon but didn’t want to respond because I was so concerned about what other people thought.”

Meanwhile, Jade, Brian’s wife who was saved at 17 before the two high school sweethearts were married, was blossoming in her Christian walk. She was raised in a non-Christian home that had Buddhist and Catholic influence, but placed no real importance on religion. In middle school she had a good friend who shared the gospel with her, but it wasn’t until she was 17 that God brought her sin into light.

“I started reading the Bible and came across Psalm 51, David’s psalm of repentance,” Jade said. “I prayed to God to save me through Jesus and make me different. He gave me peace right away.”

“She did a 180-degree turn,” Brian said. “My wife’s testimony was her life. I would watch her praying at the foot of the bed as if Jesus was in the room. Watching her hunger for the things of God made it abundantly clear that I didn’t know Him.”

They attended Broadway Baptist Church (Now Crossway Baptist in Springfield) together—Jade soaking up the Word and walking closer to God every day and Brian going through the motions.

Then one Saturday night Brian read through the book of Romans and he felt the weight of the fact that he wasn’t in right relationship with God. He had never put his faith in Jesus. The next morning after Jade left for Sunday School, Brian bowed in their home office and prayed to receive Christ.

“I came to church, told our Sunday School class and everyone rejoiced,” Brian said. “There was no backlash, only celebration. The lies I told myself was obviously my own pride. My church simply welcomed me into the family.”

And the Lord didn’t waste any time with Brian’s newfound faith. That same Sunday morning, less than two hours after Brian received Christ, Pastor Eddie Bumpers preached about Paul’s conversion experience on the road to Damascus.

“Throughout his sermon the phrase, ‘Now what, Lord?’ played over and over in my mind,” Brian said. “I know now that was the beginning of God calling me to preach.”

When he told Bumpers about feeling called to preach, Brian said his pastor intentionally put him off a little and scheduled an appointment to meet a few weeks later.

“Looking back I can see how truly wise that was,” Brian said. “He didn’t want to transfer his personal experience to me so instead he let me wrestle with God so that by the time we did talk I knew without a doubt my bones would cry out if I didn’t heed the call.”

Brian enrolled in a local Bible college and after graduation the couple moved to South Carolina to take a youth pastor position, then later he became an associate pastor. Then three years ago they moved back to Southwest Missouri to take the Senior Pastor position at First Baptist Church Clever (FBCC).

“When we got here we met a group of people who desired to see the Great Commission lived out in Clever,” Brian said.

And God is answering their prayers. In just three years the congregation has grown from an average attendance of 65 to a current average of about 360. Brian said FBCC’s mission is to make disciples who exalt the Savior, engage in service, equip the saints, and evangelize the souls.

“The main question is: how do we do that in our context and culture?” he said. “We found that we executed internal events very well, like hosting baby showers and putting on meals, so we shifted our focus to what that would look like if we did it outwardly.”

From trunk or treat events and teacher appreciation breakfasts to a helicopter egg drop that brought in more than 1,700 people last April, FBCC’s evangelistic events and service projects both present the gospel and show the love of Christ to the people of Clever. The church also hosts a big Fall Festival that has become a new tradition in the community and plans are moving forward for FBCC to open a preschool, which Brian said is a well-known need here.

“We want to engage the community and always look for new ways where we can be involved,” Brian said. “More than that our community should be better because we are here. It’s our goal for the city of Clever to mourn for us if we ever went out of business. God’s church should saturate its community with Jesus.”