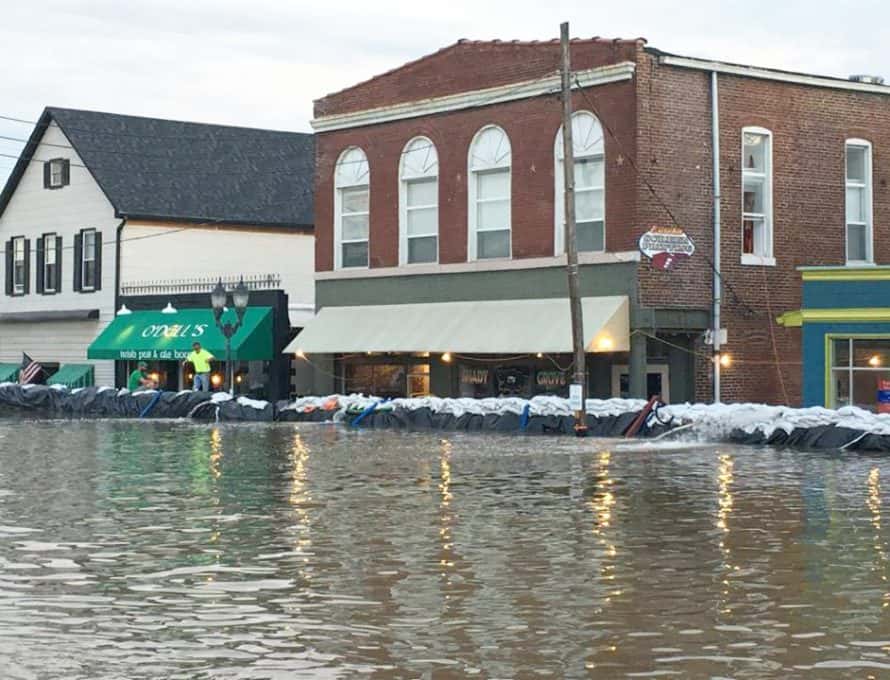 EUREKA – The flood waters were high, but a new strategy of sandbag walls and pumps - lessons that were learned from the 2015 floods, help keep downtown Eureka businesses dry. Pathway photo

EUREKA – Even before the waters receded in Eureka, the people of the town knew that the flood of April 2017 was going to be different than their experience just months ago in December of 2015.

Michael Bagwell, co-regional coordinator for the East Central Region of the Missouri Baptist Disaster Relief and member of Central Baptist Church, said the main difference was preparation.  “I knew the sandbagging did not work last time,” he said.  “So, we decided to look at a more practical approach in prevention.”

Bagwell led about 15 church members to gather sewer plugs.  “We traveled all around the metropolitan area to buy sewer plugs.  We bought about $1,000 worth of plugs. Then, we installed them in the Elk Trails subdivision which protected many of the homes in there.”

Sean Flower, president of Flower & Fendler Custom Homes, posted a thank you on Facebook, “Michael (Bagwell) and the SBC Disaster Relief helped clean up after 2015 flood, and chose to come here early this year to see if they could help prevent damage.”

According to State Representative Kirk Mathews, district 110, which includes Eureka and Pacific, who attends Genesis Church.  He said many people in Eureka credit Bagwell with saving many of the businesses in Eureka.  “When he arrived, we had built a sandbag wall 4 ½-5 feet high, but he told us that we needed to rebuild it.”

“Sandbags didn’t work last time,” Bagwell said.  “We needed to do something else, if we built sandbags, the sandbags had to be done right. We just couldn’t do it the same way again.”

Bagwell said he also called in a surveyor to determine how high the wall should be built. “We had to add a couple feet because the water got higher than predicted,” Bagwell said.  “We had an amazing team,” he said, “all of the volunteers, first responders and city officials came together.”

Mathews was impressed with the expertise Bagwell brought to the job.  “Michael looked at O’Dell’s and identified the crawl space beneath the restaurant.  He instructed them to cut a hole in the new dining room floor,” Mathews said.  “The water was trying to come up from that crawl space, but with a pump placed in the hole, the water was pumped out.  By cutting the hole, they just needed to replace a couple boards rather than redoing the entire restaurant again.”

Bagwell is in the construction business, but he is quick to point out that he doesn’t feel like an expert.  “I didn’t know exactly what to do, but I knew we needed to make changes,” he said, “and I believe God was directing us.”

Bagwell and Mathews agreed that it was difficult to put a price tag on the damage Eureka avoided, but with the previous damage, they had an idea.

“I know some of the businesses have put in more than a million dollars rebuilding after the last flood,” Bagwell said.  “I don’t know if they could do it again, they may have decided to walk away.”

Mathews said the loss of businesses would have a big impact on the economy.  “There is no question that the cost would have been in the millions including insurance and out-of-pocket.”

With two floods coming so close together, Mathews wants the entire area to make more plans for the future.

“I’m recommending meetings between Bagley, the Missouri Baptist Disaster Relief, and the officials in Pacific to see if we can get out in front of this better,” Mathews said. “The topography of Pacific is different.  We have a lot of residential and we had 200 homes damaged.  It would be wonderful to see if there are any preventative measures to take in that area.”