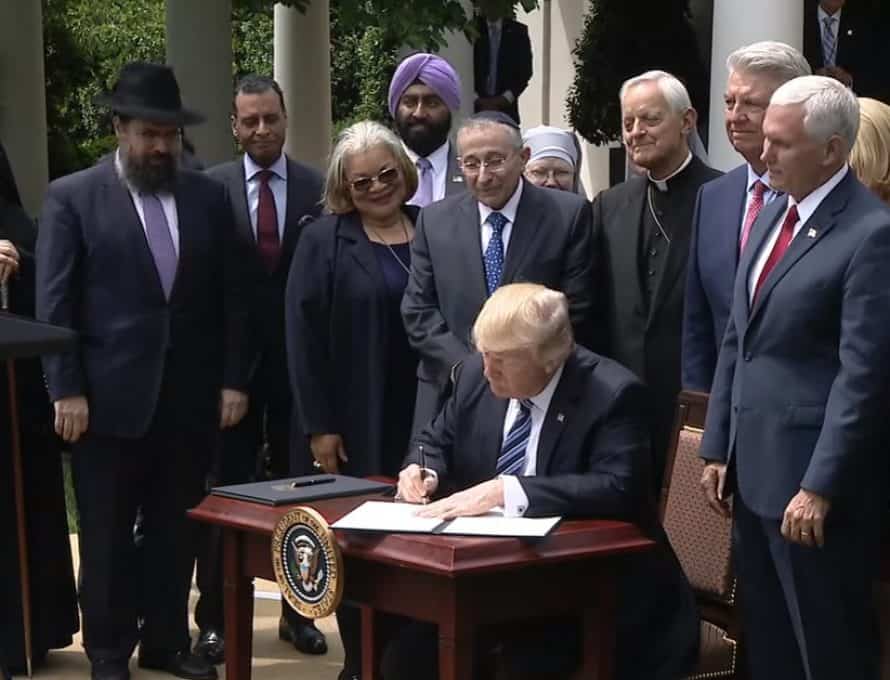 WASHINGTON – President Donald Trump signed an executive order to protect faith beliefs and practice in a ceremony May 4. Religious liberty advocates commended the action, but some said it fell short of what is needed. Among the religious leaders surrounding Trump is Jack Graham, pastor, Prestonwood Baptist Church, Plano, Texas. BP Photo

Trump’s order – issued May 4 on National Day of Prayer in a ceremony at the White House Rose Garden – says:

The executive order does not include protections for faith-based and other federal contractors who have established their employment practices on a biblical sexual ethic. Nor does it protect individuals and institutions from being penalized by the federal government for acting in support of their belief that marriage is only between a man and a woman.

Those types of protections were reportedly included in a draft executive order leaked to some news media in February.

Russell Moore, president of the Southern Baptist Ethics & Religious Liberty Commission, said, “After years of open hostility toward religious institutions and conscience from the previous administration, this executive order is a welcome change in direction toward people of faith from the White House. Not only that, but many federal agencies are working already to ensure that the executive and administrative violations of religious freedom from the Obama administration are being rolled back.

“No one should conclude, of course, that this executive order solves the wide array of challenges we face on the religious freedom front. Much, much more must be done — especially in terms of congressional legislation — to ensure that American citizens are able to serve their communities without violating their religious convictions.”

Michael Farris, president of Alliance Defending Freedom, likewise said that the well-meaning but “vague instructions” in Trump’s executive order leave federal agencies with “wiggle room to ignore that gesture, regardless of the spirit in which it was intended.”

Trump’s signing of the executive order coincided with a commemoration of National Day of Prayer. Former SBC President Jack Graham was among the religious leaders who prayed and stood behind Trump while he spoke and signed the order.

The Johnson Amendment, named after then-Senator and future President Lyndon Johnson of Texas, altered the federal tax code in 1954 to bar 501(c)(3) organizations “from directly or indirectly participating in, or intervening in, any political campaign on behalf of (or in opposition to) any candidate for elective public office.”

The amendment – and the way it has been wielded by liberal organizations especially – has caused confusion for many churches and pastors regarding what freedoms they have to address elections or even issues and the public policies affecting them.

Michael and Jonathan Whitehead –Southern Baptist lawyers in the Kansas City, Mo., area who specialize in religious freedom issues – said in a written statement, “The Johnson Amendment has been used to intimidate pastors in pulpits if they preach about biblical principles as applied to particular political candidates. There are good reasons why pastors should be cautious about endorsing any candidate as ‘God’s choice’ for a political office. But wisdom should guide that choice, not a legal ‘gag rule’ which is used to silence conservative pastors in the pulpit.”

Some supporters of repealing the Johnson Amendment believe pastors and churches – and not the federal government – should be the ones to decide what they say from the pulpit regarding elections while also believing pastors and churches should not make endorsements. Announcing support for a political candidate could harm the Gospel outreach and ministry of the church, they say.

Americans – including churchgoers – don’t think it is proper for pastors and churches to endorse political candidates. A LifeWay Research survey conducted in September 2015 showed 79 percent of Americans think it is inappropriate for pastors to endorse a candidate in a church meeting. In addition, 75 percent say churches should not make endorsements.