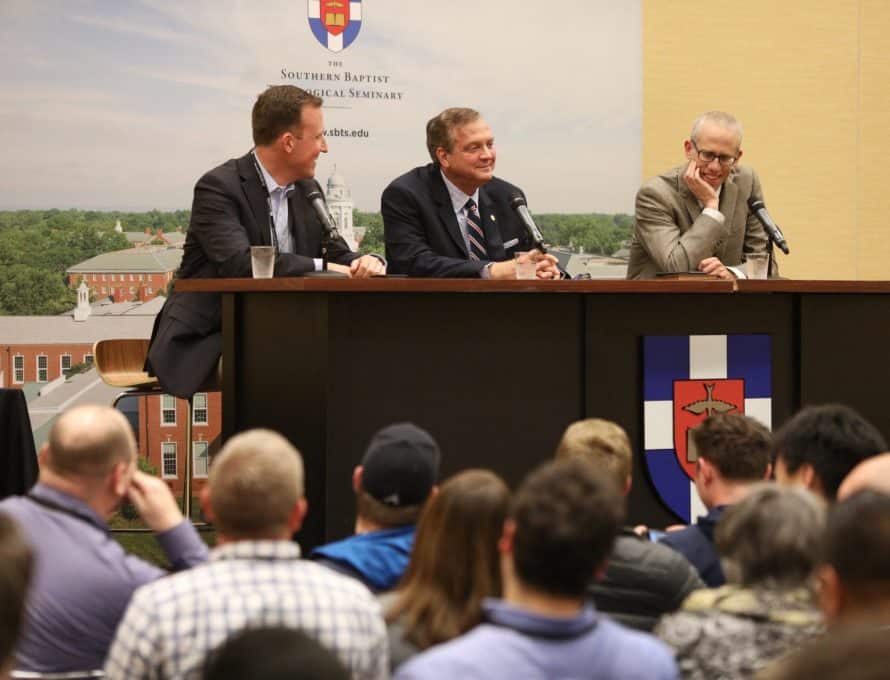 INDIANAPOLIS — Evangelical Christians must not compromise the gospel when cooperating with Catholics on social and political matters, said R. Albert Mohler Jr., president of The Southern Baptist Theological Seminary, at The Gospel Coalition National Conference on the Protestant Reformation, April 3-5.

Evangelicals partnering with other groups in shared matters of social concern is often necessary — such as with Catholics in the pro-life movement — but should never eclipse the importance of doctrinal differences between the two.

“We can be involved in common moral concerns with Catholics, but we should not call what we are doing a ministry,” said Mohler during his April 4 workshop titled “When to Stand Together, When to Stand Apart: Principles for Social Cooperation without Compromise.”

Such “co-belligerence” is essential when Protestants and Catholics find themselves fighting on the same front. But evangelical Christians should never succumb to the strong temptation to minimize the gospel for social or political benefit, he said.

“What we can’t do is ever cooperate, on any level, in such a way that we pull back our theological conviction in order to meet some other end,” Mohler said.

Contemporary matters of cooperation — such as the 1994 document Evangelicals and Catholics Together (which Mohler did not sign) and the rapid decline of denominational and institutional distinctiveness — are rooted in a story of ecumenism spanning more than a century, Mohler said. Denominationalism peaked at the end of the 19th century as the inevitable result of religious liberty, according to Mohler.

Those strong ties began to dissolve during the Fundamentalist-Modernist Controversy of the early 20th century, as fundamentalist Christians trying to maintain orthodoxy began leaving the mainline church, leaving behind either modernists or Christians no longer as committed to denominational loyalty.

The fundamentalist Christians, meanwhile, developed their own infrastructure after World War II around “second-degree separationism,” the mandate that fundamentalists should not have fellowship with those who fellowship with liberals. New evangelicalism emerged during the mid-20th century under the leadership of men like Carl F.H. Henry, rejecting the disengagement of fundamentalism and appealing to a larger orthodoxy.

“This is the reason why there have been endless internal and external questions about evangelical identity. It’s been an external preoccupation — right down to the fact that the media never know who is and is not an evangelical,” Mohler said. “But the confusion outside has also been matched by a consternation inside. Evangelicalism has been debating its identity from within ever since the new evangelicalism emerged.”

New evangelicalism thought it was winning the budding “culture war” until it became clear it was not, Mohler said, leading to significant pressures of late modernity forcing evangelicals into an “ecumenism of the trenches” between evangelicals and Catholics. The decline of denominational distinctiveness and the added pressure to ecumenize with political and social allies makes strongly held gospel convictions even more essential, according to Mohler.

In 2005, Mohler wrote an article titled “A Call for Theological Triage and Christian Maturity,” which explained the necessity of arranging a “scale of theological urgency” for doctrinal matters. At his TGC workshop, he pointed to that scale as a helpful grid for cooperation with other Protestant Christians.