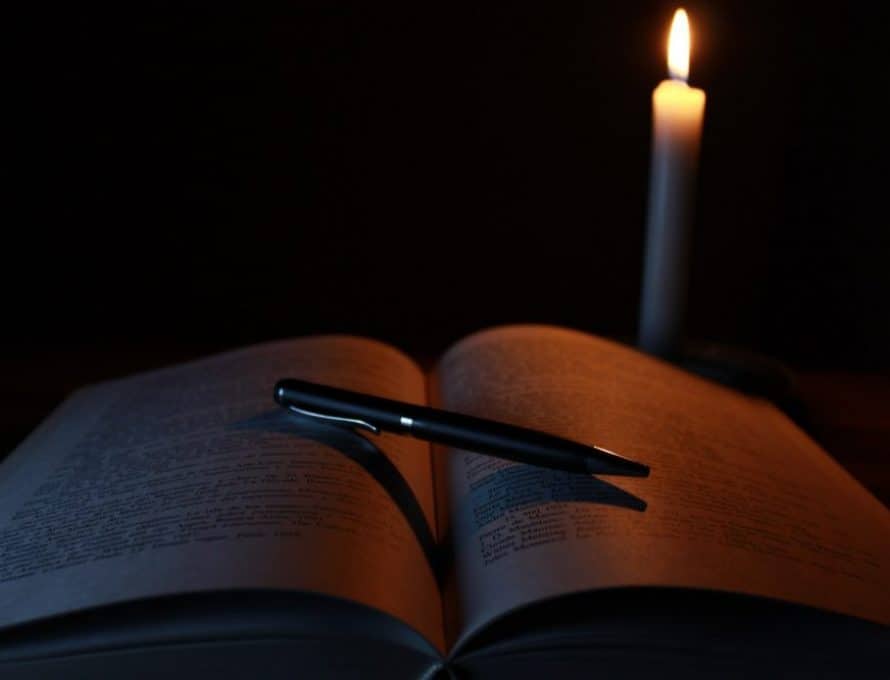 KIRKSVILLE — The Rehoboth Baptist Church provided an interesting and unique worship experience as they prepared for the Easter celebration.  On Maundy Thursday, they commemorated the last night of Jesus before His crucifixion.  The church set up their worship center in the shape of a cross to let worshippers go through four stations of a cross outline to experience some of the things Jesus and the disciples experienced that night.

Associate Pastor for Family Ministry, Ben Austic, designed the service which was set up to be an individual or family experience rather than a corporate worship. It was a come and go experience for two hours on that Thursday evening.

The sanctuary chairs were pulled to the sides of the room.  Luminary candle bags outlined the shape of a cross in the worship center.

People were greeted in the foyer and given instructions and a guide sheet.  They then went to the candle-lit sanctuary to stop at the foot of the cross where a foot-washing station was set up.  There a deacon asked permission to wash the feet of the participants. This was an optional activity, and people could decline if they wished.  After the deacon prayed, the participants were sent on to the next station which was located on each side of the two arms of the cross.

The second station was a place to sit and pray privately confessing personal sins.  People could write their sins on a card and tack it to a wooden cross on the wall.

The third station was an intercessory prayer station.  Retired ministers and others prayed for prayer needs that were expressed by the participants.

The last station was at the head of the cross and two pastors offered communion and prayer with people as they completed the experience.

Senior Pastor Curtis Ferguson and Pastor Austic prayed for the two elements as they served them to the congregants.  Both men said they felt it was a very personal way to help people experience the Maundy Thursday experience and take the Lord’s Supper with individuals.

Austic said, “We wanted to connect with younger folks.  We need sensory worship. A lot of our worship is very one dimensional.  In this experience you could taste the bread and you could feel it as you ripped a piece from the loaf.”

The low lighting, the soft music playing and the smell of the candles certainly reinforced what they were trying to accomplish as they provided the worship experience.

Austic added that they based their approach on John 13-20 which are Scriptures that portray the last days and hours of Jesus’ earthly ministry.  Jesus told the disciples where He was going, and then they proceeded to see that happen.

He said only a few members of the congregation declined the foot washing experience, and said it was an interesting experience for most of the Baptists who are somewhat unaccustomed to this tradition which is more likely found in liturgical churches.

Taylor DiRoberto and his wife, Sara, are graduate students living in Kirksville, which is a university community.  Sara is a master’s level student at Truman State University and Taylor is enrolled in online M.Div. courses at Midwestern Baptist Theological Seminary in Kansas CIty. They attend Rehoboth along with about 70 other university and medical school students.

DiRoberto said, “As we entered the sanctuary, it was clear from the beginning that this was to be a special time of reflection and meditation on Christ’s sufferings during Holy Week. The nature of the service truly helped to fix the attention of our hearts and minds on what Christ and His disciples experienced on that fateful night.”

Asked what was the most meaningful part of the service, he said, “The foot washing station helped me recognize the utter humility of Jesus. Admittedly, it felt a bit awkward to have someone washing my feet for me—even my own wife! I can imagine now why Peter was so initially resistant to Jesus washing his feet. This must have felt like an unbelievable reversal of roles to have the Lord acting like a servant.”

Austic is willing to share outlines of the service with anyone desiring to replicate the experience next Easter season.  Contact him at benaustic@sbcglobal.net.