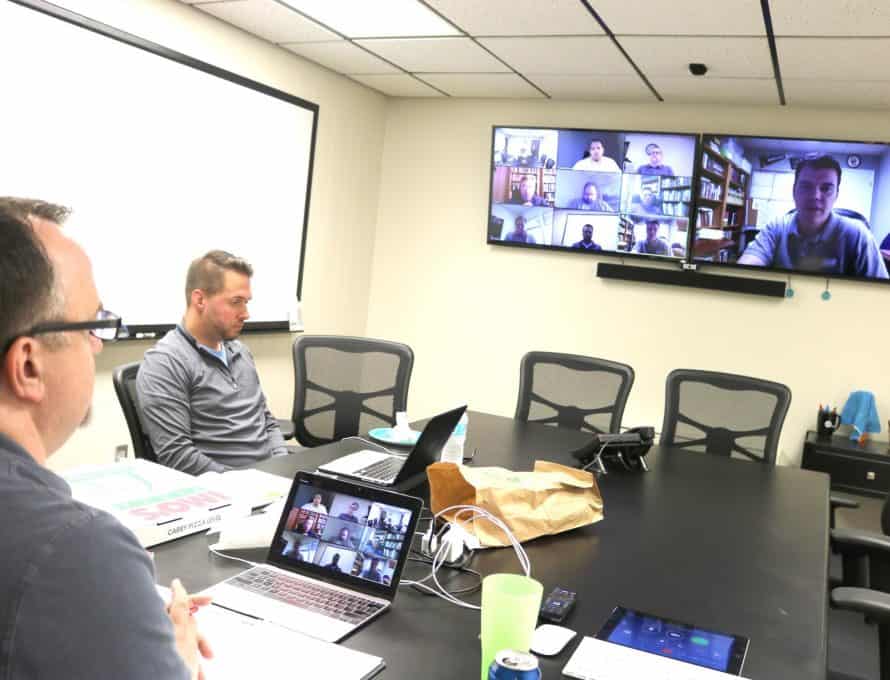 JEFFERSON CITY – Matt Kearns, making disciples catalyst for the Missouri Baptist Convention, left, and Spencer Plumlee, senior pastor of Riverview Baptist Church in Osage Beach, video conference with others in their cohort as part of the Bonhoeffer Project. Pathway photo by Brian Koonce

The author of the book, “The Cost of Discipleship,” believed that unless one followed Christ in a serious fashion, it was to cheapen the grace of God.

And now his name is headlining an effort to ensure churches in Missouri and beyond do not forget the value of discipleship in the church.

Created by Bill Hull, The Bonhoeffer Project is an intentional way for a cohort of eight to 10 leaders to meet for a year of reading, discussion, debate, planning, strategy, and do a bit of life together; in short, discipleship.

“It’s focused on helping us think carefully and biblically about making disciples in the local church,” said Spencer Plumlee, senior pastor of Riverview Baptist Church in Osage Beach. “You go upstream theologically with how you’re talking about the gospel and following Jesus in disciple-making, but then you also go downstream into a strategy for your local church.”

The idea is patterned somewhat after Bonhoeffer’s “Grand Experiment.” From 1935-1940, he trained pastors in an illegal seminary. The students were instructed first and foremost in discipleship. Eight to ten people would spend a year together studying, discussing, and doing discipleship.

The goal of the Bonhoeffer Project is to encourage each participant to become a disciple making leader. Once that decision has been made, the goal is then to provide the participant with the knowledge necessary to carry out a plan for making disciples who also will make disciples.

Plumlee’s cohort is facilitated by the Making Disciples ministry of the Missouri Baptist Convention and catalyst Matt Kearns. Made up of other Missouri Baptist pastors from all corners of the state, the cohort has been working their way through the project since last August, sometimes meeting in person, other times meeting online.

“It has challenged me to think of discipleship less as transfer of information and more as transformation of somebody’s identity in Christ,” Plumlee said. “A lot of times, I’ve just thought of it as getting good information out – which is incredibly important and a great start. But the Bonhoeffer Project has pushed me as we move downstream to think carefully about what I’m doing to emphasize obedience and following Jesus in a new believer’s life as soon as possible. And for people who have been Christians for a while, showing them that it’s not enough to know these things and be aware of them, but we need to obey them and apply them to our lives.”

So what has that meant for Riverview in a practical sense?

“It’s caused us to remap our disciple-making strategy at the grassroots level,” he said. “We want to make sure it includes not just things that people can complete or check off, but also a process where they are implementing these things in their lives from day one.

Plumlee said a second takeaway from the Bonhoeffer Project is making sure the church has a differentiated yet connected pathways for making disciples and developing leaders.

“I think in years past, I’ve collapsed those into one lane or track,” he said. “This has helped me see them as two tracks that aren’t disconnected, but are distinct. Discipleship is helping someone know how to follow Jesus, be a biblical Christian, how to invest themselves in someone else and reproduce spiritually.

“Developing leaders, that character, calling and competency, is different even though it’s connected,” he said. “Both are needed, but sometimes when we try to do both together we end up not doing either one of them well.”