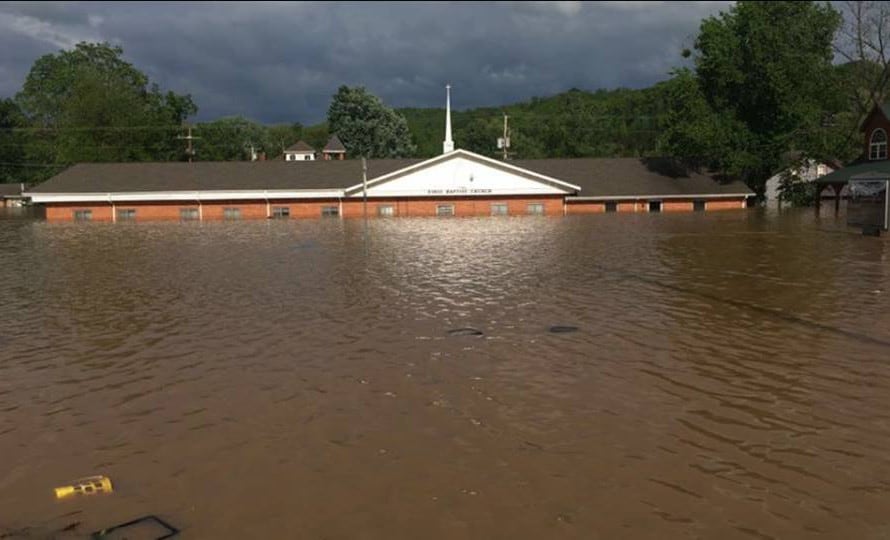 VAN BUREN – The flood waters are just now beginning to recede, and while many Missouri Baptists are water-logged, they are ready to help their communities dry out.

With some parts of the state seeing rain for four or five straight days and clocking more than a foot of precipitation over the weekend, Gov. Eric Greitens declared a state of emergency April 29. The Mississippi River reached 17 feet above flood stage near Cape Girardeau, within six inches of the all-time record. The Meramec River near St. Louis was expected to approach record levels reached less than 18 months ago. Several rivers were still rising as various flood gates upstream opened, causing even more flooding. Since April 29, authorities have conducted nearly 100 evacuations and more than 30 rescues. The Associated Press reports three people have lost their lives.

A Missouri Department of Transportation road closure map was nearly solid with red dots across the state showing road closures, but it is the southern half along and below I-44 that has borne the brunt of the flooding.

First Baptist Church in Van Buren, 25 miles northwest of Poplar Bluff, is almost totally underwater. The building sits just a couple hundred yards from the banks of the Current River, although the waters  crept up to the roof line. The previous record flood there was 29 feet; according to the local sheriff, this flood has reached beyond 40 feet. Carter County Sheriff Richard Stephens says 100-150 homes and about 30 businesses in Van Buren have been impacted by floodwater.

Ron Robinson, pastor of First Baptist, said the congregation will meet in the shell of their new building that is still under construction for worship on Sunday.

Billy Garner, pastor of The Church of the Rescued and Redeemed, Cape Girardeau, agreed that the flood was a tremendous ministry opportunity.

“It’s brought out the neighborhood and given me an incredible opportunity to minister to people,” he said. He had been praying that God would open doors for ministry in the community, but a flood wasn’t quite what he expected.

Garner said that their church building was untouched by the waters, but that volunteers from the community—fire fighters, police officers, SEMO football players, and others—came out to the church’s property to dig up sand for sandbags. This has given the church an opportunity to work alongside them and reach out to them.

Missouri Baptist Disaster Relief volunteers including chaplains, assessors, and mass care workers across the state have been put on standby for a response once the waters recede, but two recovery teams have already been called for in Neosho and Eureka, and a feeding unit has been set up in Doniphan. Volunteers should be in contact with Dwain Carter’s office to advise of availability, and wait to be deployed from there.